What’s more, you can find most of them in and around Tokyo. Metropolis went on a one-day trip around the city to taste as many of the capital’s weirdest ice cream flavors so you don’t have to. Along the way, we’ll also introduce some local “gourmet” bonuses that are outside of Tokyo, but equally worthy of mention, for your next trip out of the city. Which flavors would you dare to try? 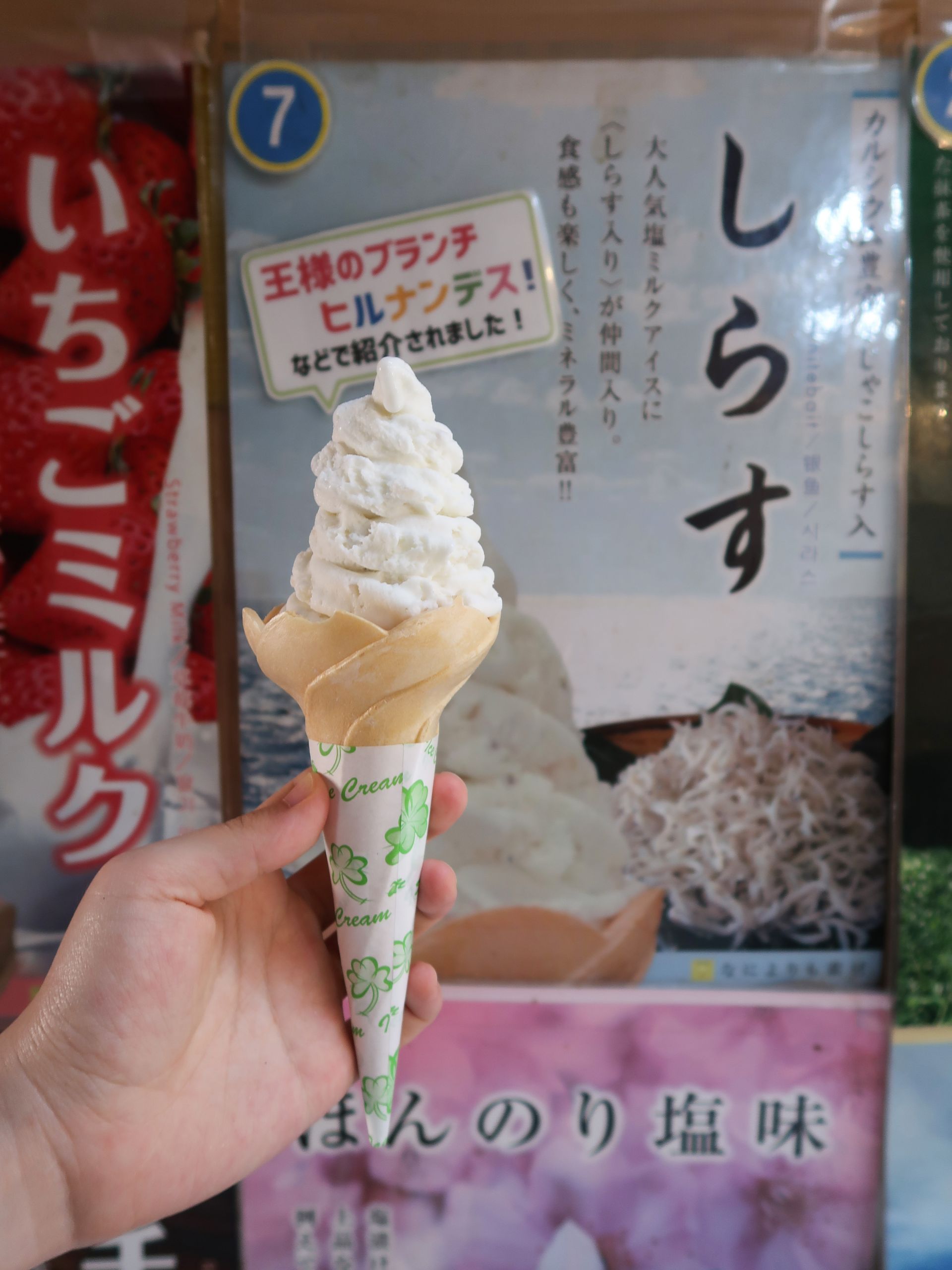 We kicked off our ice cream tour early in the morning in Tsukiji, the good old hometown of fresh-off-the-boat seafood in Tokyo. Many people were already there to secure the freshest seafood of the morning. We had joined the seafood-craving crowds too, but for something else: whitebait (a type of small white fish) ice cream.

Fish ice cream? How? Why? I honestly don’t know. Now zoom in — can you see the little black spots? They are not black sesame seeds. They are the eyes of whitebait fish. Still not convinced? Let’s take a look at the whitebait ice cream in its ultimate form:

This shot is actually from a store in Shizuoka, but it shows you the full scale of the fish. So, how does this salty fish taste like with sweet ice cream?

Here’s my honest answer: It was tolerable. But why?

The ice cream base has a pleasant balance between saltiness and sweetness. However, the fish didn’t actually bring anything to the flavor profile. It really put me off when I bit into a tiny piece of tasteless fish while I was enjoying the smooth texture of the ice cream. Though this was a pass for me, there seems to be a fanbase online. At least it’s worth a try. Maybe you’ll love it, who knows?

If you think that’s enough talk of marine life invading your go-to dessert, now imagine salty fried oysters with thick soy sauce dripping down your snow-white ice cream cone. Have you ever tried dipping your french fries in your milkshake at fast-food restaurants? (I’m looking at you Americans.) Think of that but with the surprise of an oyster in the mix too. Though not in our Tokyo ice cream day trip, give this “umami bomb” a try the next time you’re in Okayama. It’s a surprisingly delicious combination though it really sounds like a terrible one.

I think these seafood should stick to being eaten with white rice, not ice cream. With all the weird savory flavors they’re topping their ice creams with, it seems like eateries in Japan are treating the dessert as if it was just white rice on a cone, and pairing it with the same sides.

What else goes with Japanese white rice? Japanese pickles. The one and only perfect word to describe these foods is “salty” — sometimes too salty. It’s common that dessert chefs add a pinch of salt to their dessert recipes to highlight the sweetness, but can you imagine sprinkling a handful of salt into your ice cream? Kinkontei in Iwate has mastered the combination of ultimate saltiness and sweetness with their pickled ice cream.

In addition to pickles, another side dish you’ll commonly find at Japanese restaurants is onsen tamago (hot spring eggs). Normally, you mix the runny egg with rice and other condiments — a warm bowl of classic Japanese comfort food.

But was it still comforting when we substituted the white rice with the sweet chill of ice cream? I won’t spoil it — you’ll have to find out for yourself at Yuami-ya in Gifu Prefecture. This one wasn’t on our Tokyo day trip spot but it was the inspiration behind creating our Tokyo version.

The classic matcha ice cream (but this one makes you sneeze)

Enough with the side-tracking with side dishes on ice cream cones. Let’s continue our trip in Tokyo. Matcha might seem like the most obvious classic choice when it comes to ice cream in Japan, but this one we tried in the afternoon in Higashitabata made the list because it was a bit…dangerous.

Located in a quiet neighborhood near Tabata Station, this matcha ice cream grabbed the attention of the TV program “Monday Lateshow (月曜から夜ふかし),” in which the hosts talk about all kinds of weird and wonderful things happening in Japan.

What’s weird about this matcha ice cream is that it makes you cough and sneeze when you try to take a bite. When I first saw this on TV, I thought the hosts were just exaggerating for the cameras — but then I went to have some for myself. When I was carefully licking the dripping ice cream, I heard a couple cross the street in a fit of coughs and sneezes. I looked over and saw both of them laughing, the bottom half of their faces dusted in matcha powder.

I could tell from the color that the matcha powder used is nothing like the mediocre packets of green tea powder you’d find at a convenience store. Nagamine Seicha specializes in high-quality Shizuoka Tea. Taste-wise, the balance of bitterness and sweetness was just right for me and I would highly recommend this to anyone who’s a matcha fan — but eat it carefully!

This cone is a great price, only ¥400, and I suggest you eat it fast to avoid staining your clothes green as it drips on you. Or, as I had unintentionally done, wear matcha green to camouflage your clumsiness. 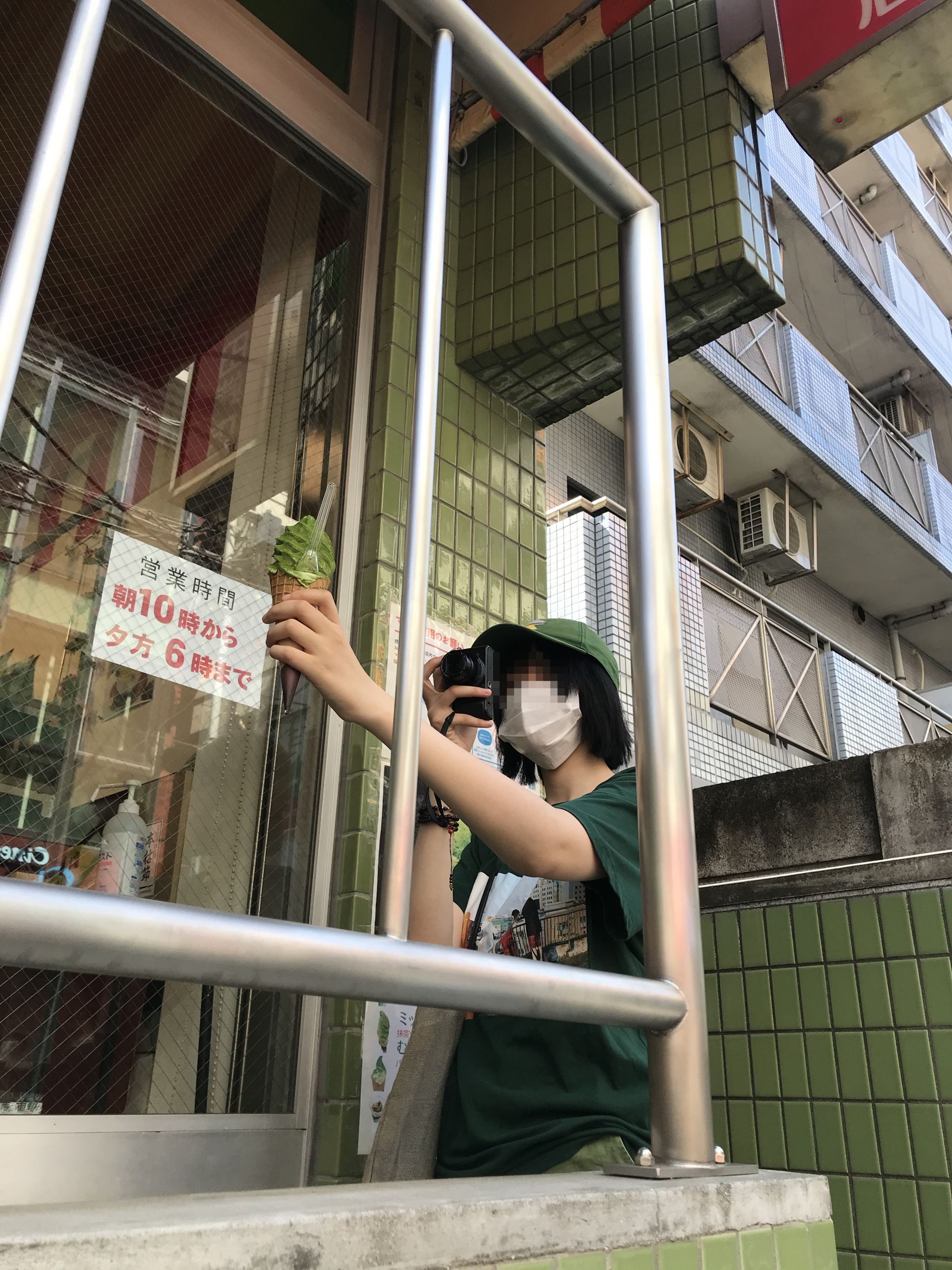 Along our ice cream tour, we spotted that classic shade of green in almost every ice cream shop we visited. However, if you head out of Tokyo and visit Yamaguchi, don’t be fooled by the matcha-esque hue of this one because there’s something a little fishy about it…

At a glance, this wakame (seaweed) ice cream looks similar to a matcha one. But if you take a closer look, you will see tiny flecks of seaweed hiding in the green cream. According to reviews on Tabelog (we didn’t have a chance to visit here in person), this fishy-looking ice cream is surprisingly good.

In line with our green-themed Japanese foods that someone thought would be good to put on top of a wafer cone is the wasabi ice cream in Nagano. Though not part of our day trip, I happened to find this “Daio Wasabi Farm” when I was wandering in the middle of nowhere in Nagano trying to find some food to eat. I walked in and saw a big advertisement board with their premium wasabi ice cream. The fear it would make me cry (on many levels), the curiosity, the expectation… It took me five minutes to decide if I should really give it a try.

To be very honest, it doesn’t taste bad at all, though it does sound like a bad idea. The high-quality wasabi is nothing like the spicy artificial ones I’ve had at chain sushi restaurants. The spiciness from the wasabi is rather refreshing as it cuts through the sweetness and brings a weird heat to the iciness. It was indeed a pleasant surprise when I was starving and convenience stores were nowhere to be found.

OK, back to Tokyo. Two stations away from Tabata, Sugamo was our next stop on our ice cream hunt. This one is located on the main shopping street right next to the station.

I know what you are probably thinking: “Doesn’t that look a bit like a…”

“This texture is just off…” said my friend, giving me an uncertain look.

“Yeah, it’s just sesame seeds and soy milk,” I replied as I took a bite. I was blown away by how good it tastes despite its deceiving appearance. Not too sweet yet you can taste the deep flavor of the high-quality sesame seeds. It’s also plant-based and made with no milk or eggs. What a healthy guilty pleasure!

We continued moving west and arrived in Shinjuku for the internet-famous IKEA blue ice cream.

¥200 is a budget-friendly deal for a stylish picture on your Instagram, but I don’t think your taste buds or your stomach will thank you for this weird tasting thing.

The flavor tasted artificial and like chemicals; I just couldn’t get over the fact that this blue and black cone had an apple flavor. If you insist on giving it a try, make sure you go to the IKEA in Shinjuku since it’s only available there.

We thought the blue apple flavor was already crazy enough, and our stomachs were telling us that six ice creams were enough sugar for one day. But we had now arrived in Nakano and faced the biggest challenge of the day. This giant eight-scoop monster is in every Tokyo ice cream guide, but we couldn’t leave out such a legendary dairy dessert on our Tokyo trip.

The shop staff warned us to not spend too much time photographing it because this wobbly thing could fall at any time.

And so we began our seventh and final ice cream of the day. Ten minutes in and we were not even halfway through. Our lips and tongues had become numb and all we could taste was sugar. Keep in mind that from top to bottom there’s supposed to be eight flavors: orange, almond, chocolate, matcha, strawberry, coffee, vanilla and Ramune (a Japanese brand soda). 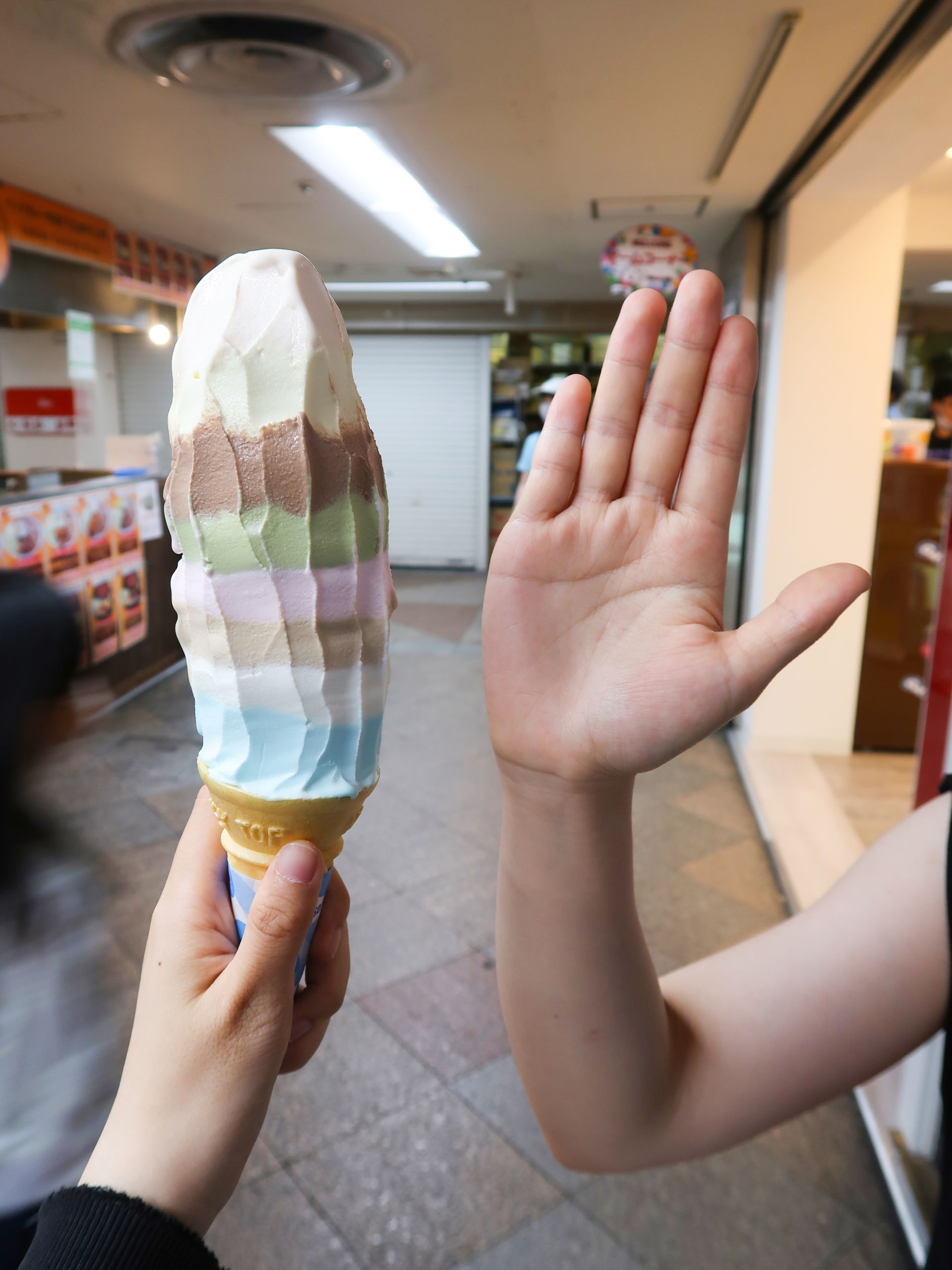 After about 25 minutes, we finally gave up and couldn’t finish the final, soda-flavored layer. I would say we did well enough since we had already eaten so many ice creams prior to this monster. Next time, if you’d like to challenge this ice cream in Nakano, be sure to invite at least two friends with empty stomachs so there’s a better chance of victory. 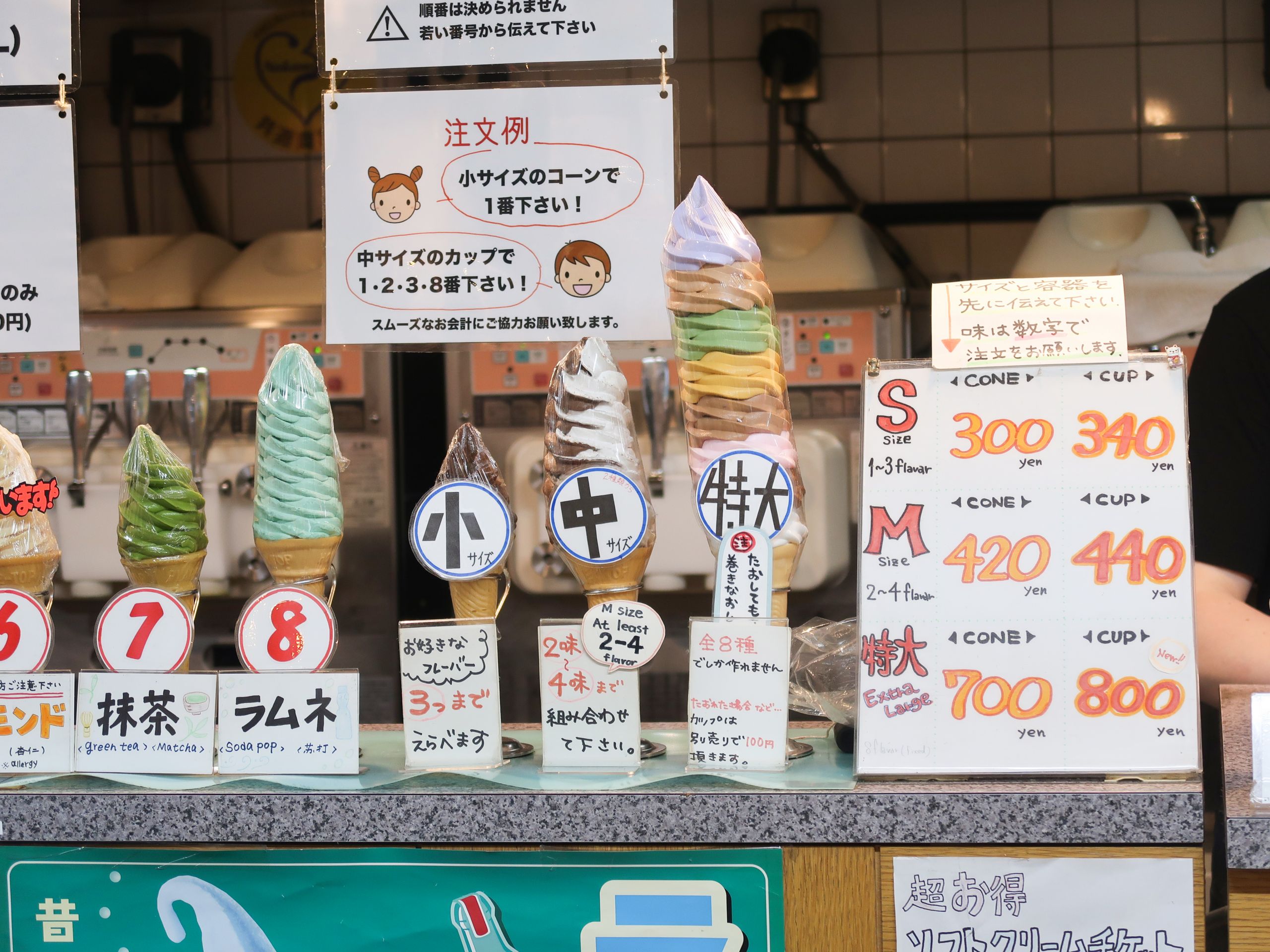 There you have it. Our most honest guide to the most exotic ice creams you could possibly find in Tokyo and beyond. A final note, I thankfully didn’t have a stomach ache after consuming so many ice cream cones in a day, but follow this guide at your own risk.

Looking for something else to eat in Tokyo? 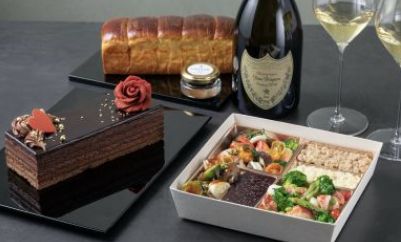 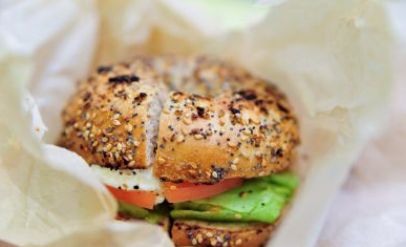 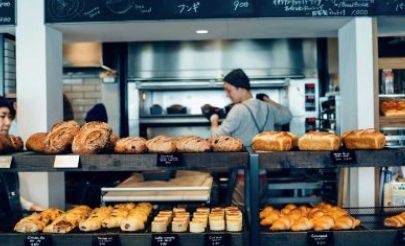 The Sourdough Enthusiast’s Guide to Tokyo Hunting for the crunchiest, nuttiest loaf in the capital

Through this article, we hope to help you understand Weirdest flavors of ice cream