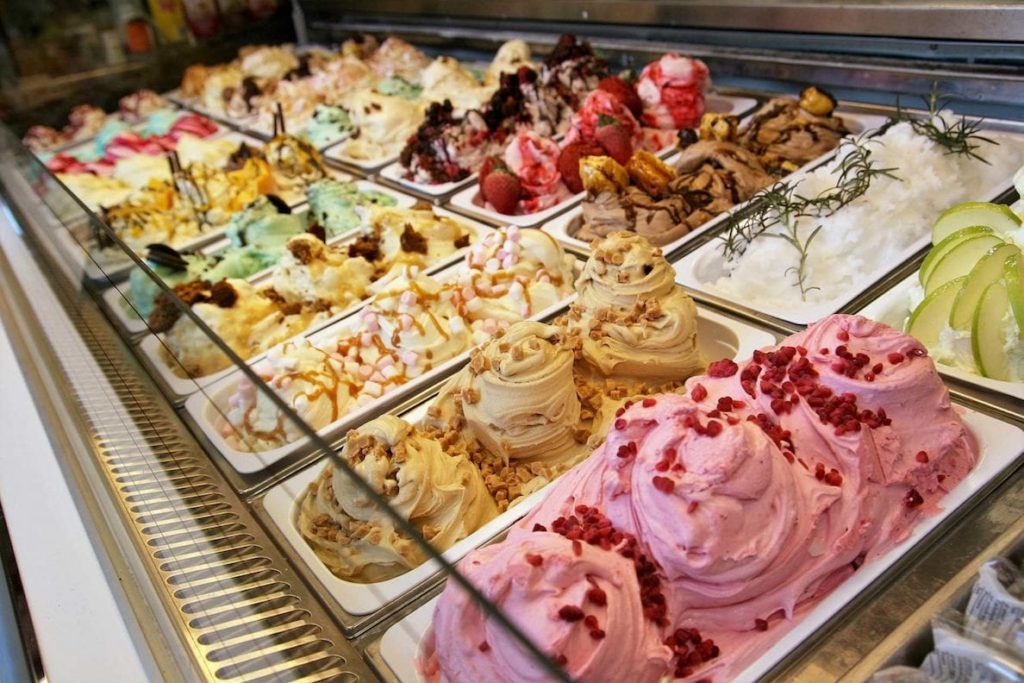 Surprisingly, Vienna is said to be Europe’s ice cream capital, despite Italy’s more famous gelato culture. It’s because most of the ice cream parlours in Vienna were brought about by Italian ice cream makers. Two of the more famous gourmet ice cream shops are Zanoni & Zanoni (founded 1952) and Ferrari Gelato (founded 2014).

Zanoni & Zanoni also has a wide selection of ice creams, probably the most in Vienna and is famous for for their dark chocolate ice cream and large servings. Ferrari gelato, despite being newly opened, has already made a name for themselves in the Viennese market. Ferrari is a self-service ice cream parlour and also serves yummy sorbet in case you are in a mood for some fruity flavor, less the cream. Gouda is best known for its cheese and stroopwafels, but you can’t visit this quaint Dutch city without visiting David’s Gelato parlour on Lange Tiendeweg. Available in a variety of flavours, the gelato is hand-crafted using locally sourced fresh fruit and fresh milk. 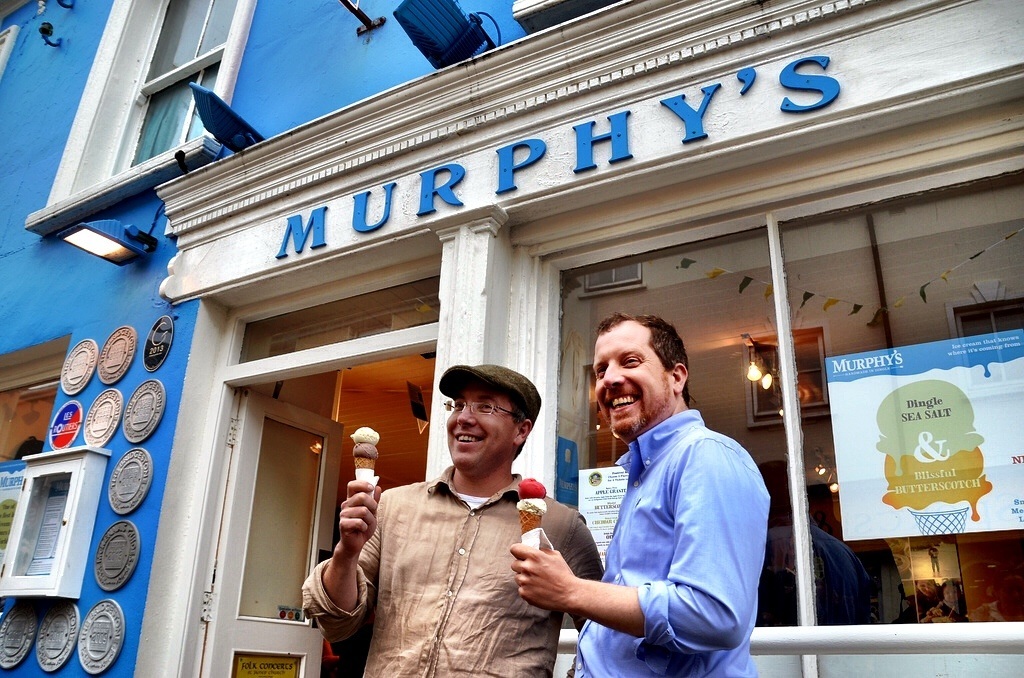 When in Ireland, make sure you find your way to one of Murphy’s six locations and try a few of their unique flavors like caramelised brown bread, caramel honeycomb, or Irish coffee with whiskey. 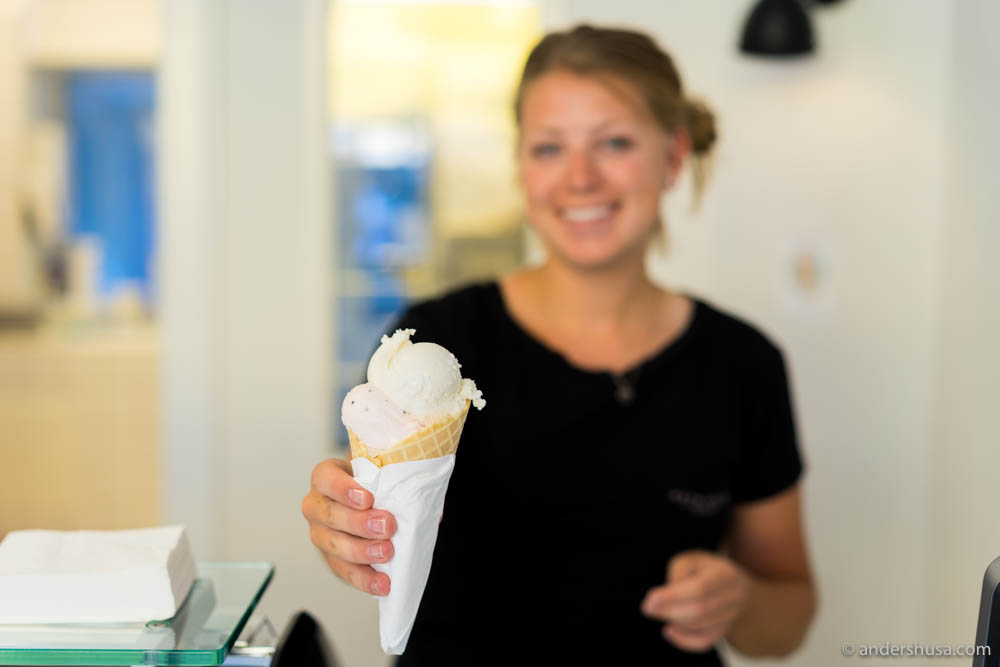 When in the Danish capital, come taste the world at Østerberg Ice Cream. Owner and ice cream scientist Catherine Østerberg is also a flavor artist. With two locations in Denmark to serve you, there are delicious traditional Danish tastes like sea buckthorn, elderflower and the classic licorice. 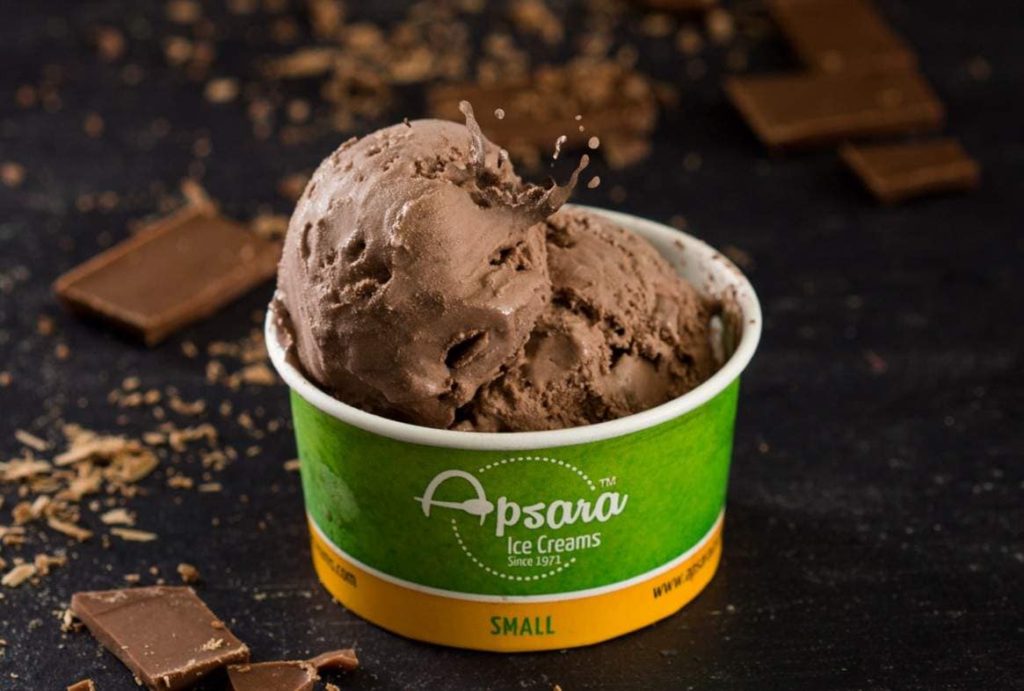 India’s secretly famous ice-cream company, Apsara Ice Creams, have been delighting their customers since 1971. They make these frozen desserts using traditional wooden contraptions called “sanchas.” You will absolutely love the creamy texture of their ice creams! Interesting flavours include sweet lime with almonds, orange with dried apricot, Indian kulfis in local fruit flavours, pani-puri (a savoury street-food) sorbet, chikki, paan (betel leaf) and thandai (north Indian dessert). They also have a range of sugar-free ice creams for those who are diabetic. You’ve eaten a lot of gelato in Italy, but nothing compares to the gelato at Il Vizi degli Angeli on Via Ridola in Matera. The gelato and sorbets here are made fresh every morning – and they taste like it. You will love some of the more unusual flavours like pine nuts, bergamot, profumo di primavera (milk, thyme and lavender) and asteroide (caramel cookies with huge chunks of caramel biscuits). Order a cone with two scoops so you can try some of their heavenly combinations – pineapple with ginger is a new favourite ice cream combo ever.

What’s more, this gelateria is in one of Italy’s most exciting places. Matera, in the southern region of Basilicata, is one of the oldest cities in the world. It’s a city of caves, perched on the edge of a ravine and it’s one of the most extraordinary places you’ll ever visit. Budapest is home to Gelarto Rosa, one of the favourite ice cream shops on the planet. Located in the historic Szent István Square, close to beautiful St. Stephens Basilica on the Pest side of the city, Gelarto Rosa creates truly visually stunning ice creams and always has a steady queue outside its doors.

Its signature ice creams are sculpted to resemble delicate roses, and there is an air of romance with every scoop. The selection of flavours is mouthwatering (pear and salty chocolate is our top pick!), and the rose sculpted ice-creams look so pretty you honestly may not want to eat them! 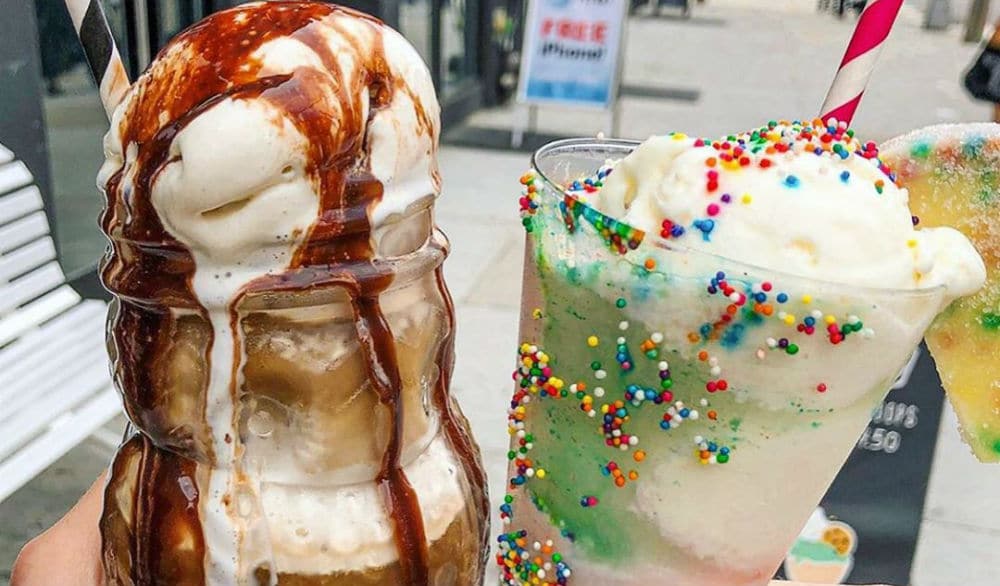 Continuing the family ice cream tradition, the latest generation began to experiment with adding an innovative boozy take on ice cream. What resulted is the best of two delectable delights; traditional ice cream ﬂavors infused with diﬀerent liquors. There is always a line outside the store, and you must be 21 to enter and partake of these tasty treats. This is really one of the besty gourmet ice cream shops around. Cheers! 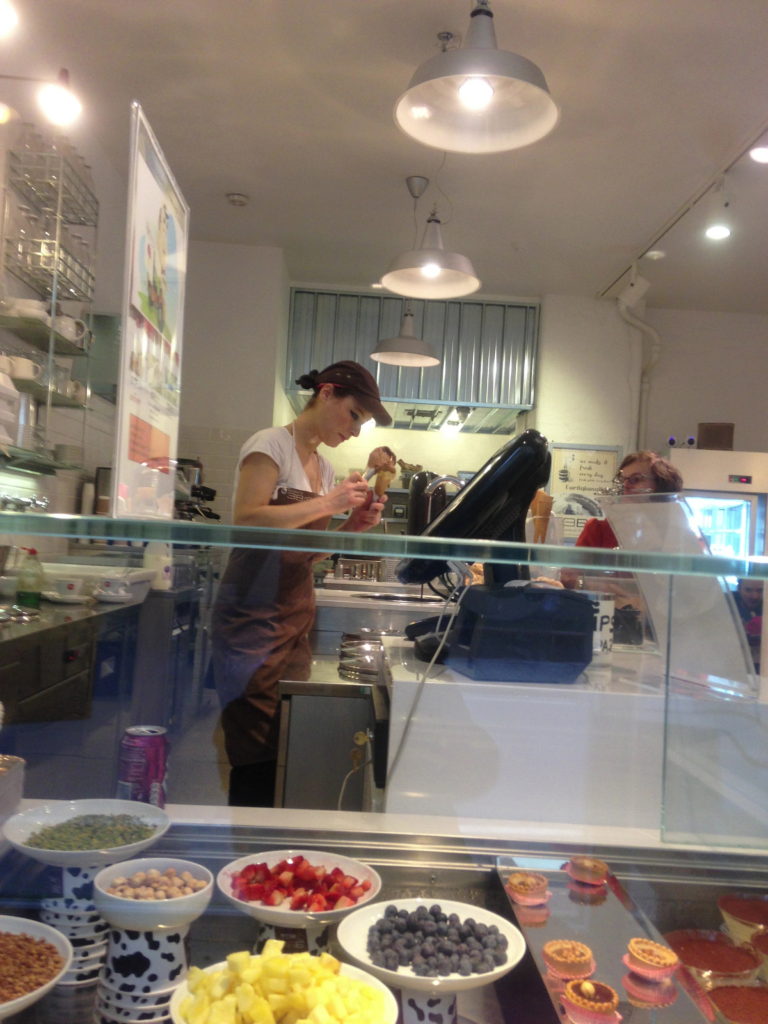 This favourite ice cream shop Gelateria 3BIS is in London’s famous Borough Market. The gelato is incredible — creamy, luscious and available in an array of delicious, classic flavours like Eton Mess and Panna Cotta. They also have liquid chocolate literally on tap, and serve a shot of thick melted chocolate sauce at the bottom of their ice cream cones and cups.

There are actually two London branches, one just next to buzzy Borough Market, and the other on charming Portobello Road in Notting Hill (their other two branches are in Rimini, Italy!) The Portobello Road branch also serves ice cream sandwiches, with scoops of gelato served in a light brioche bun. 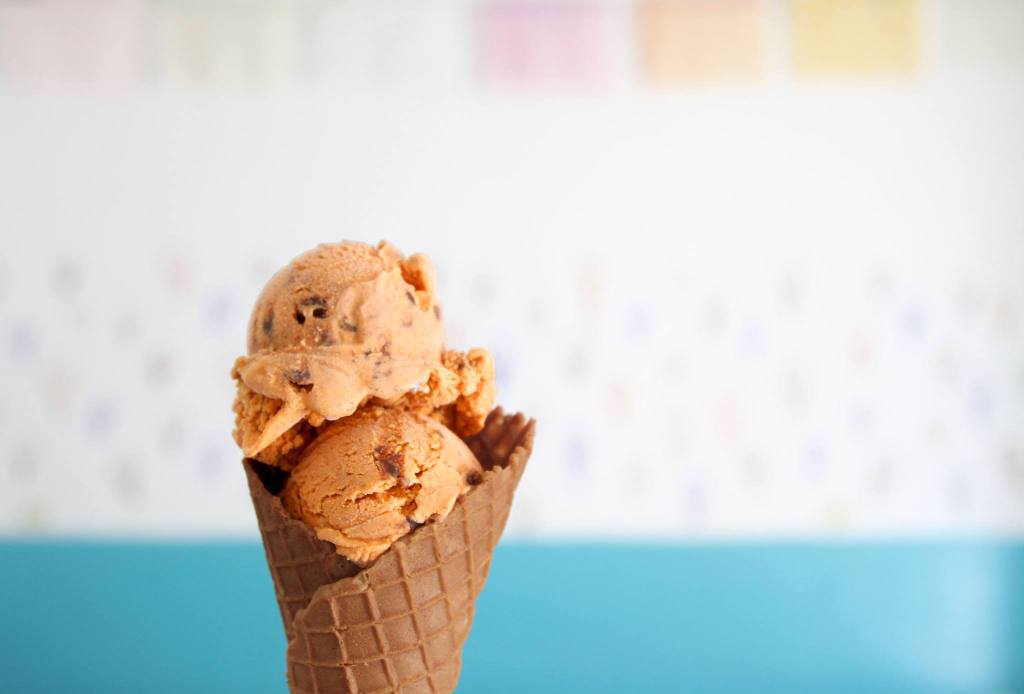 This unique gelato shop with two locations in Merida’s historic center is run by four creative young people from different countries. Pola’s ice cream has a delicious and creamy texture, and the intense, all-natural flavors are developed with creativity and a sense of humor. Many are inspired by traditional Mexican foods such as mazapán, tascalate (made with local red achiote paste), cinnamon, sweet potato with honey, and beans and pork (offered only on Mondays, since it’s a Yucatán dish traditionally served that day). 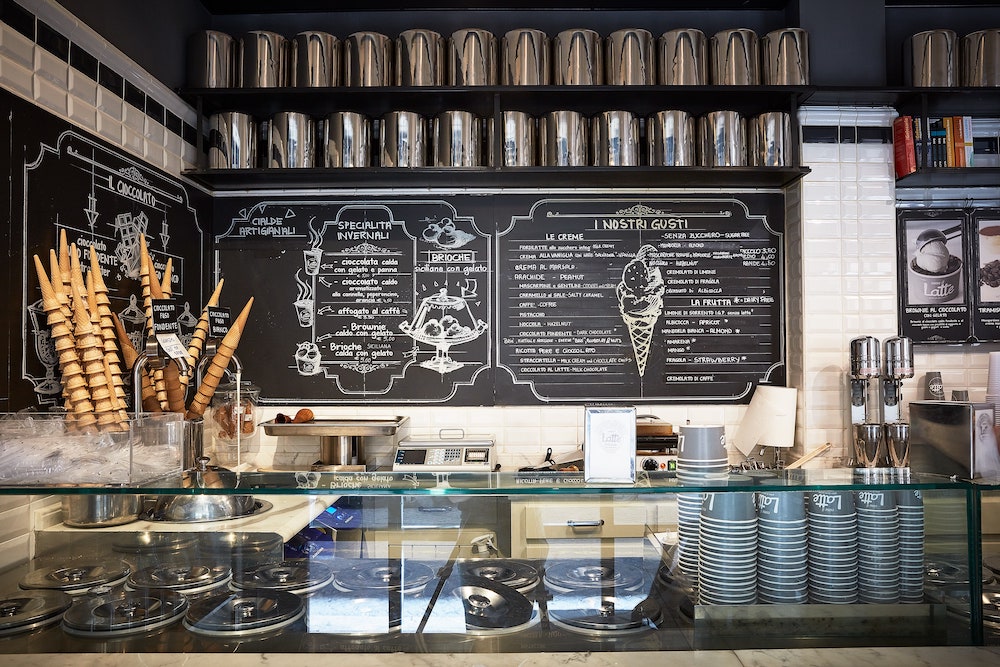 Come il Latte means “like milk.” And true to their name, they make creamy gelato that is decadent and delicious, with more than 40% sweet cream in every gelato flavor! (They also have several non-dairy flavors and those are wonderful as well.) Gelato artigianale at its best, Come il Latte serves up fresh, natural, flavorful ingredients in every flavor, from classics like pistachio to exotic combinations like mascarpone with biscotti.

And the kicker? You can have rich dark or white chocolate swirled around your cone before the gelato is added. Aaaand…you can have flavored whipped cream on top! This is pure, sinful decadence ! So make sure you visit Come il Latte when you are next in Rome! 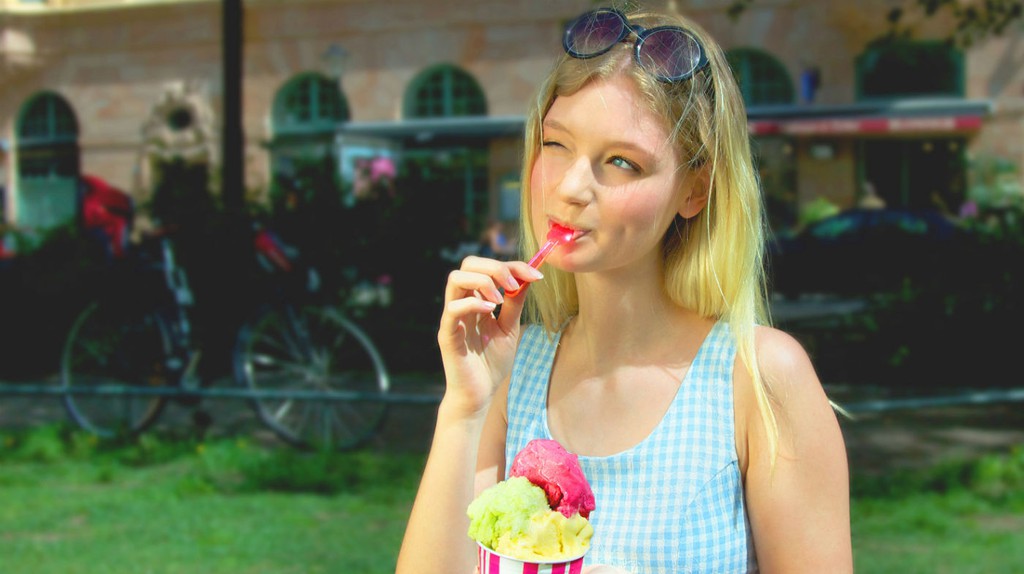 Their ice cream range follows the season’s selection of fruits, berries and playful curiosity. Simply what’s the best at that moment in time. Add in the fact that they are absolute masters at what they do in terms of the process and you end up with one of the very best ice creams in Europe. Has to be tasted to see how good it actually is.

Bi-Rite Creamery, conveniently located in San Francisco’s hippest neighborhood—the Mission—is a MUST when in the city. Their awesome Flavors? Think peach cobbler with Masumoto peaches, blueberry crisp with pecan oat crisp crumble, or balsamic strawberry. It’s true there’s a line every time of day, but it moves fast, so don’t let that deter you. Walk across the street to lovely Dolores Park with your ice cream to join locals and check out the scene. 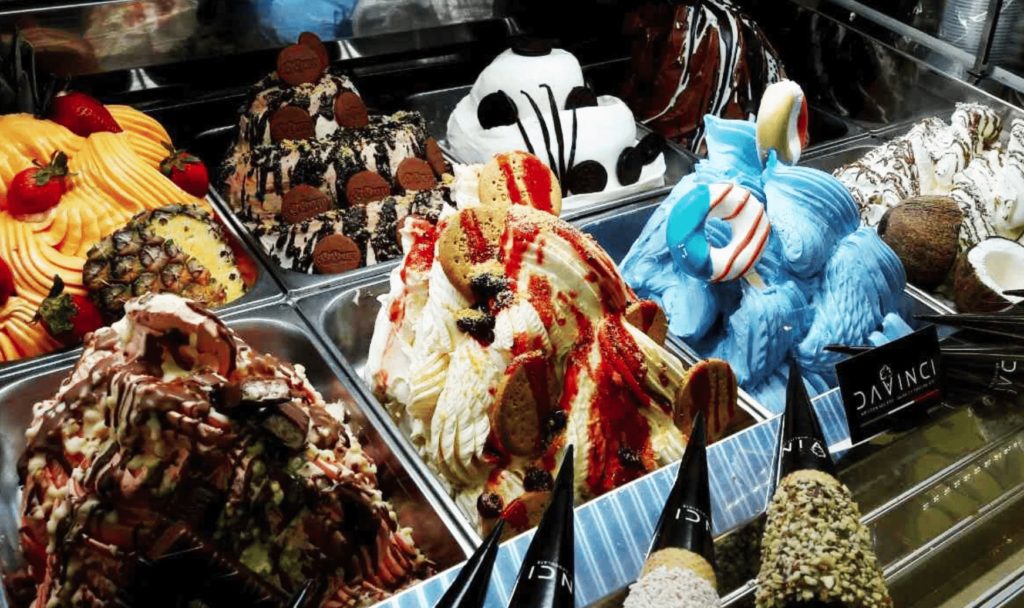 They’ve been serving up their delicious ice cream now for 18 years and everybody leaves a happy customer. You can either sit in and have a “coupe” (a large selection with fruits and sauces) or grab a cone and go and wander this stunning city. They make their gelato fresh on site every single day and serve it up in a number of original and colourful ways. Walking into the store is an assault on the senses with multi-coloured cones, doughnuts in all shapes and sizes and some of the most innovative and exciting ice cream flavours you will ever see. Venchi started their delicious story in the early 1800s in the northern Italian city of Piedmonte. Silviano Venchi began to explore his love of chocolate at only 16 years of age in his little gourmet ice cream shop in Cuneo. It was not long before people noticed the remarkable quality and taste of Silvio’s chocolate.Silvio’s competitive advantage for superior chocolate in a country known for outstanding sweets was to package the treats and present them as if they were jewels.

Growth continued and today the company has more than 100 stores in over 70 countries. Many of these stores, like the sparkling new store in Manhattan, offer ice cream. It is just as good as their chocolate.

They are so passionate about their own ice cream that they produce their own buffalo and cow’s milk as well as cream. These are some serious ice cream professionals we are talking about. Their farm is organic and by the time they add the flavours and it ends up in your hand you are going to be in for a serious treat. You’ll never look at ice cream in the same way again. You’ll struggle to find a group of people more passionate about making ice cream anywhere in the world. Their gelato is super rich, super creamy and absolutely bursting with flavour. They also serve great cakes and coffee but all your attention should be on that ice cream. 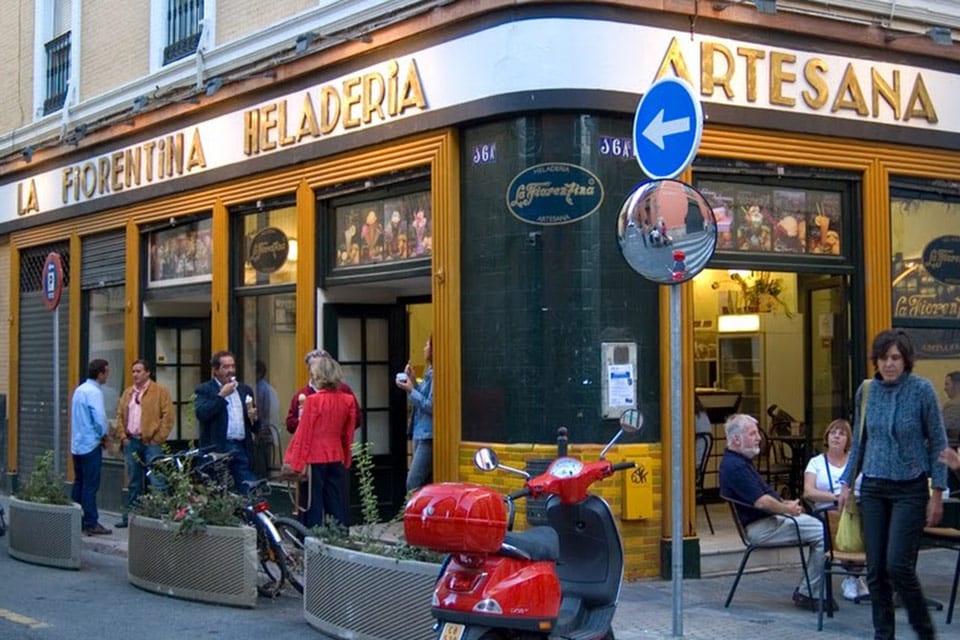 It’s all about the unique and creative flavours here: Orange Blossom, Vatican Cream, Sweet Pestiño, Lima with Basil, Oil Cake, Mediterranean Cream… the list goes on. All ice creams and sorbets are made from ancient recipes, and look just as good as they taste. The only tough thing will be trying to choose your flavour. 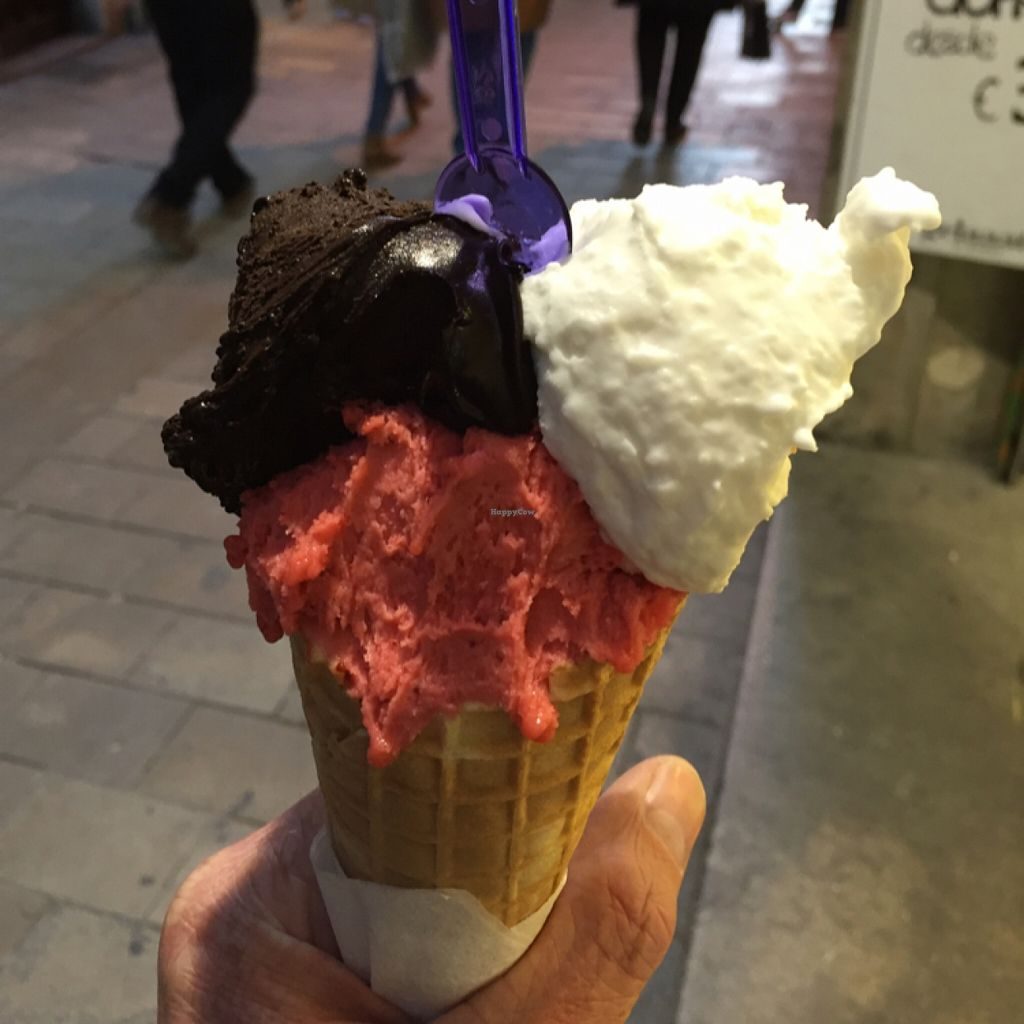 Gelatos here are prepared daily by their gelato master Marco Di Consiglio, with fresh and top quality products. They use national and top quality ingredients such as: d’ordall peach, Gramona’s cava, saffron, watermelon and avocado pear from nearby crops. Enjoy it in store, taking it in a cone or a cup, or if you prefer you can take it home in a specially designed container to keep the gelato in perfect condition for days. 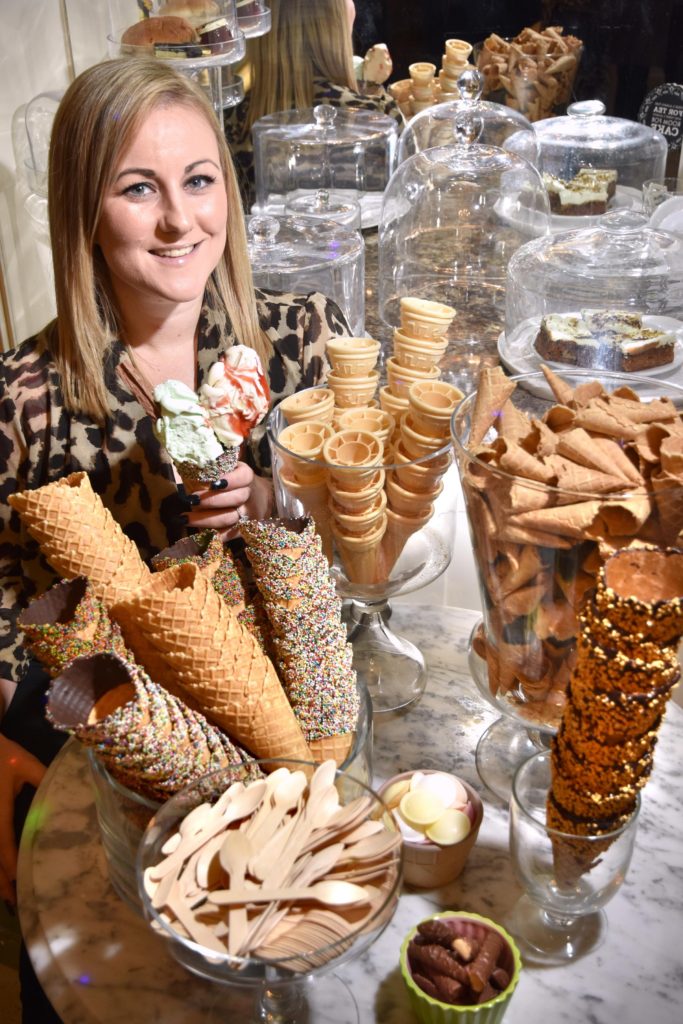 Licc has a range of 150 flavours (and are coming up with new ones all the time) of ice cream that will you have salivating as soon as you see them. The 24 flavour display freezer is permanently stocked with an interesting product range – the whole fruit spectrum, classic nut varieties, rich chocolates and the ever popular bubble gum and jelly bean flavours. The shop itself is cute and cosy and the perfect place to sit down with your ice cream and coffee and take a breather. Cremeria Emilia makes their incredible ice cream fresh every day without hydrogenated fats and artificial dyes. They use only natural and selected raw materials for the highest quality scoops imaginable. Their flavours are classic yet perfect – think strawberry cheesecake, coconut milk or rich chocolate.