Here are the top best Ice cream truck dateline voted by users and compiled by us, invite you to learn together 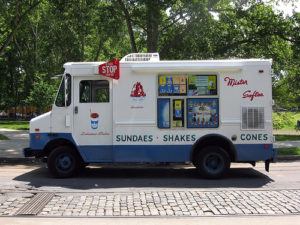 The best way to teach any skill is by showing it to your child…not telling.

~ Dr. Michele Borba, Educational Psychologist and Author of many books including The Big Book of Parenting Solutions

I recently watched the recording of the Dateline show on Stranger Danger with Dr. Michelle Borba. What I watched was scary and emotional. With parents watching via hidden cameras, an actor posing as an ice-cream truck vendor approached groups of two or three children who were working on posters and care packages for U.S. troops. This friendly ice-cream man offered them free ice-cream and a tour of his ice-cream truck. 99% of the kids got in the truck! Here’s the link to the Ice-Cream truck Stranger Danger Date-line show and another for the video game truck/home alone episode.

We’ve since showed these episodes to our children for them to realize how easy it is to be lured. It’s also a valuable lesson for children to see what other children would do. In the footage, it is clear that some children were feeling uneasy but didn’t listen to their “spider senses” or gut instincts. Other children were excited and didn’t seem wary at all, one boy was very hesitant but caved to peer-pressure, and one was assertive right from the start and refused to get on the truck, no matter how much the ice-cream truck man was trying to entice her. Of course this was a small sample size but useful as examples to show our own children.

On another Dateline episode, they also tested kids, who were home alone, to see if they would let a stranger into their homes, and again most of them did. In most cases, it was an adult that the kids had met before, such as someone who did work on their house. They also let an adult who showed a “sheriff badge” into their home.

Michelle Borba’s 7 Recommendations for Stranger Safety (*Caution: Teach one skill at a time):

2) Teach your child to identify suspicious behaviour (Important rule: Your child can ask a stranger for help, but an adult stranger does not ask kids for help)

3) Teach – Don’t open the door when home alone – no matter what! and…don’t say anything to the person through the door

5) Teach “Drop, Holler & Run” – if you can’t run, kick, scream and drop to the ground and have a temper tantrum – it’s much harder for a person to abduct someone who is kicking and wriggling on the ground

6) Teach kids to yell “Help! This is a stranger!” if anyone is trying to kidnap them

7) Teach children to listen to their “spider senses”/gut instinct ~

from The Big Book of Parenting Solutions, Dr. Michelle Borba

It’s not enough to teach children about stranger safety once or twice. Dr. Michelle Borba emphasizes the importance of reviewing and role-playing these skills on a regular basis, and teaching children to look the stranger in the eye when they say “no”.

Would your child be ready for these stranger danger lures?

I remember being 23 years old on an overnight boat in Quebec. One of the men in this shared cabin offered me a ride back to Quebec city, instead of the 7 hour public bus trip. He seemed nice enough, and I was tempted to say “yes” as it would have saved me a lot of time, but I felt very uncomfortable inside. I declined and reported the incident to the ship captain. (The guy was in his car waiting for me to get off the ship.) The ship captain went over to him and explained that I would not be going with him. He drove away, but I was scared for the whole bus ride that he would somehow show up on the bus or at the bus station. Fortunately, he didn’t but I felt very thankful that I hadn’t got into his car with him.

I remember how nervous I felt, even as a 23 year old saying “no” to this man’s offer to drive me. Imagine how difficult it is for our children to say “no” to an adult – hence the importance of role-playing.

I hope these important tips will help all our children to be safer,