Here are the top best Best ice cream ct voted by users and compiled by us, invite you to learn together

Milkcraft – Fairfield, West Hartford Handcrafting each ice cream cone to order, everyone, everywhere seems to be buzzing about Milkcraft. From its cow-to-cone seal to its pillowy house-made bubble waffle cone, Milkcraft offers some of the best ice cream you’ll ever taste. Period. (It’s also easily some of the most expensive ice cream you’ve ever bought but seriously worth every penny!) Behind the counter, Kitchen Aid mixers line the counter ready to whip up your order right before your eyes using liquid nitrogen while waffle irons are ready and waiting for the next cone to be ordered, to be served warm of course. With flavors like S’mores Campfire, PB & J, and Milk & Cereal, your kids will go bananas. And for you, try the Smokin’ Choco de Leche that pairs chocolate with caramel and black flakes of smoked sea salt. Or, order a scoop to be topped with a house made glazed doughnut. You’ll have died and gone to ice cream heaven. 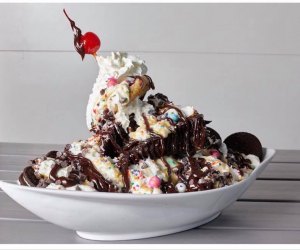 Cream & Sugar Café – Bethel With monstrous milkshakes dubbed “Freak Shakes,” the lovely Cream & Sugar Café tucked in the heart of Bethel, must make it onto your bucket list. But be prepared, lines are long, sometimes with wait times of up to an hour. So what’s a Freak Shake? Take the Belly Buster. It’s made of chocolate and cookie dough ice creams, layered with chocolate chip cookie, slice of chocolate cake, a brownie, and ice cream cone, Oreos, chocolate sauce, and, lets not forget, whipped cream. Or the Crazy for Coconut. Toasted coconut ice cream, loaded with Mounds candy, coconut cookies, wafer rolls, chocolate chips and whipped cream. These shakes can take up to 10 minutes to create. And, they’re all available as a sundae. 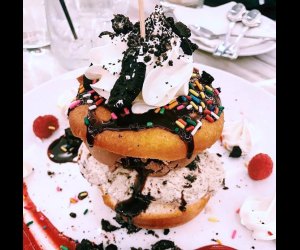 Sugar Factory – Mashantucket Known for concocting insane creations like a 24-scoop sundae topped with sparklers and milkshakes crowned with an entire slice of cheesecake, the Sugar Factory at Foxwoods’ is any sweet tooth’s paradise. The dessert menu occupies about half of the restaurant’s menu with an array of cakes, cheesecakes, gourmet ice cream sandwiches, and “insane milkshakes.” But let’s talk ice cream. The restaurant’s iconic ice cream sundae “King Kong” is two dozen scoops of ice cream, covered in hot fudge, caramel and strawberry sauce, showered with candies, cookies, walnuts and waffle cones with sparklers atop the behemoth creation. Not that hungry? Try the gourmet ice cream sandwiches like the Peanut Butter Cup with peanut butter cookies, chocolate cream, and chocolate chips or the Rainbow Doughnut, a doughnut with cookies n’ cream ice cream, chocolate ice cream, fudge and raspberry sauce, whipped cream, Oreo cookie crumbs, and raspberries. And really, you oughta try one of their Insane shakes. But, that’s another story.