Below is a list of the best Target brand ice cream voted by readers and compiled and edited by our team, let’s find out 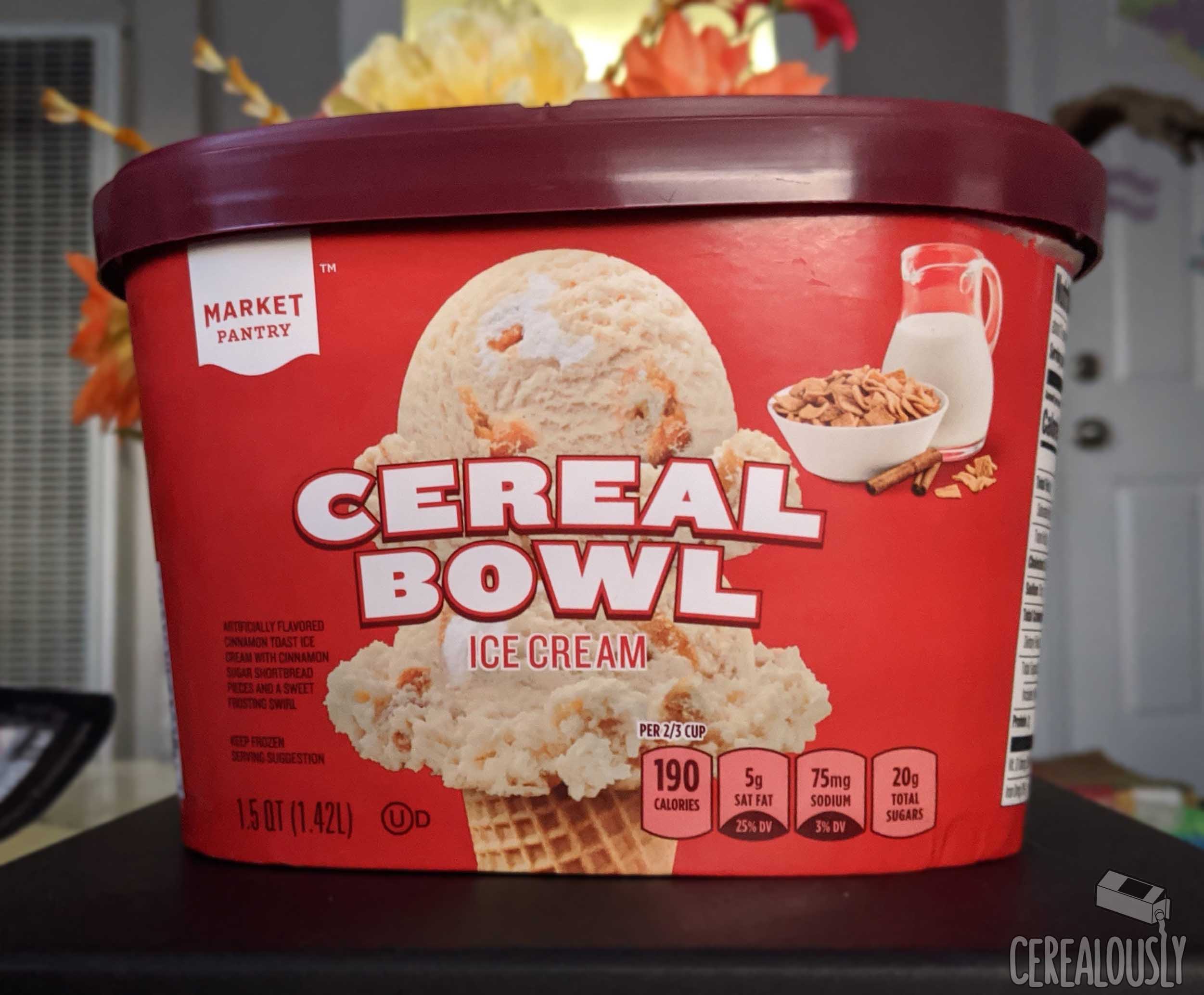 Cereal and milk have a deep, cosmic soul bond. This is known.

But where’s the cerealized justice for other dairy delicacies? Sure, Trix basically defined the cereal-yogurt game so hard that it discouraged all competition and ultimately discontinued itself—except for one place, I guess? But despite my mildly discomforting, yet nevertheless ignored lactose intolerance, I demand more. I want Cocoa Krispies Kefir. Cap’n Crunch’s Peanut Butter Crunch Butter. Heck, give me Frosted Flakes Cottage Cheese, I’ll eat it. But only if it’s large curd, of course.

Err, maybe I’m not giving enough credit to a potential “cereal milk” factor here. I’d better reserve judgement until I’m doubled over on the couch, looking for the right adjectives in between stomach-garglings more intestinally eviscerating than swallowed mouthwash. No pain, no bloggerly gain!

I certainly don’t buy ice cream a lot, so I’m not sure how typical it is for a freshly defrocked tub to look like a public toilet, or maybe an ivory avocado, at a passing glance. But after carving away the center puck, I could much more comfortably proceed toward my uncomfortable goal.

The packaging describes Market Pantry Cereal Bowl Ice Cream as “Artificially Flavored Cinnamon Toast Ice Cream with Cinnamon Sugar Shortbread Pieces and a Sweet Frosting Swirl,” which seems like a very verbose way of saying this probably wasn’t conceived as a “cereal ice cream.” And before I elaborate on how the taste supports this theory, I have to talk about just how creamy Cereal Bowl Ice Cream is.

I know it’s a trend amongst cheaper ice creams to chintzily whip up the classic dense-n-chewy artisan ice cream texture, but as someone with sensitive teeth who often bobs spoonfuls of “real” ice cream between my cheeks like they’re volcanic Pizza Rolls, I appreciate how this Market Pantry stuff is about as melt-in-your-mouth as the nether-dregs of a soggy Cinnamon Toast Crunch cereal bowl. This also reveals just how influential the “sweet frosting swirl” is in this breakfasted dessert. It’s difficult to physically see said swirl, but its fluffed-up butteriness nevertheless hovers over every bite like a doting grandmother.

You know, the only person you could sweet talk into letting you melt ice cream over your morning cereal. 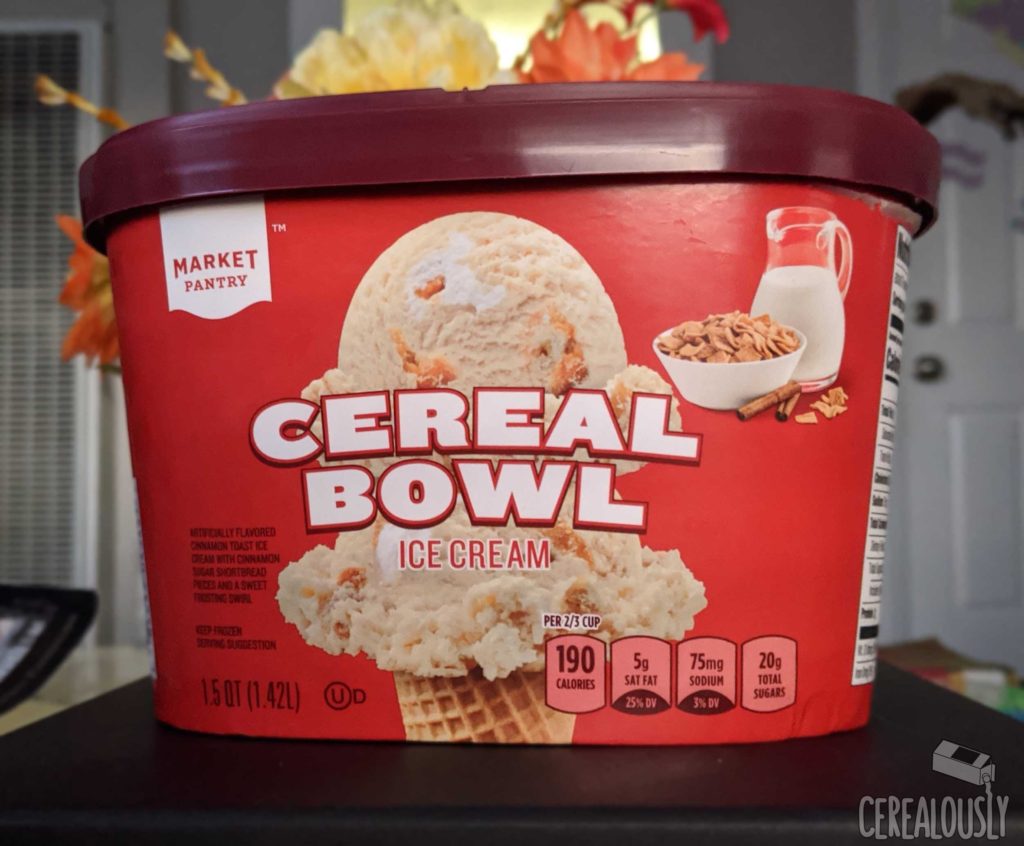 But in regards to the Cinnamon Toast Ice Cream and Cinnamon Sugar Shortbread Pieces, which form the meat of this product beneath the saccharine hide of sweet buttercream, their collective taste instills in me a neurotic need to freeze-dry a tankard of Cereal Bowl Ice Cream to General Mills themselves. Stapled to it will be a note, scrawled in cinna-blood (fun fact: I did cut my hand while reviewing this and very much savored the taste of Hemoglobin Toast Crunch), that simply reads: “USE THIS TO SEED A STARTER CULTURE OF GINGERBREAD TOAST CRUNCH.”

It’s practically a fundamentally me meme by this point that a Gingerbread Toast Crunch would not only make my Christmas but retroactively make all of my previous Christmases a little brighter. And though Sugar Cookie Toast Crunch is amazing, it don’t mean a thing if it ain’t got that nutmeg-wafting oven ding. Market Pantry Cereal Bowl ice cream is a titillating testament to what could be, as its very-snickerdoodle-esque base is wholly transformed to something special by the added ingredient of molasses. This really tastes like a gingerbread cereal-milk ice cream: it’s warm, cozy, and features a nice interplay of frosting, sweet-spice, and a touch of mouthwatering golden roasted molasses.

For those who like their ice cream loaded with so many mix-ins that it’s more like Frozen GORP Goop, you’ll likely be disappointed with Cereal Bowl Ice Cream’s demure and thinly distributed shortbread pieces. They don’t provide a textural contrast, let alone a palpable crunch, instead acting like pulp in OJ, providing more of the same rich, doughy base on which frosting and molasses do a delightful ice skating routine.

Overall, though I’m no Creamologist (and am probably afraid to Google whether there’s a degree for that), I greatly enjoyed Market Pantry’s Cereal Bowl Ice Cream—not as a cereal ice cream, per se, but as the best darn gingerbread ice cream that doesn’t call itself gingerbread. Because if there’s one thing that would bring more joy to my holiday world than Gingerbread Toast Crunch, it’d be the return of Kemps Gingerbread Man Ice Cream Sandwiches—a discontinued slice of Christmas magic that probably took part of my life force to the grave with them.

So please, General Mills: take note, and take action. I need that sliver of my soul back to think of better Christmas present ideas than half-reviewed boxes of Pop-Tarts for the whole family.

The Breakdown: A cereal ice cream? Sort of: it tastes like cinnamon cereal milk spiked with sweet ginger-juice, and that’s a big compliment. I look forward to a store-brand Frosted Flakes Ice Cream that really tastes like cereal-nog.

The Bottom Line: 8.5 grandmotherly breakfast alchemists out of 10