Below is a list of the best Ice cream dirt cake voted by users and compiled by us, invite you to learn together

When it comes to ice cream in the freezer aisle, Ben & Jerry’s can’t be topped.

Look, we all know the ice cream itself is great, but what keeps us coming back to Ben & Jerry’s? It’s the load of mix-ins swimming freely throughout the pint (well, maybe not freely… picture a bunch of chubby kids crashing into each other inside an inflatable pool). Ben & Jerry’s knows this too, so you know what they did? They said f*ck it, we’re not even gonna make you wait; we’re just gonna throw a bunch right on top.

Introducing Ben & Jerry’s Topped, a new line of seven loaded pints that have a layer of spoonable chocolatey ganache (and sometimes other mix-ins) greeting you immediately under the lid.

This review is part of a series. Today’s Ben & Jerry’s Topped flavor is:

Just add your own dirt and it’s just like the real thing!

Prepare to make a mess because you’re immediately treated to a shit-ton of chocolate cookie crumbs that will explode out of the pint as you try to navigate it. If that reads like a complaint, you must not know me very well. I’m practically always covered in cookie crumbs.

The chocolatey ganache underneath is very impressive. It’s much thicker and more decadent than the “crackly” candy shell in Magnum pints, and offers a rich and and creamy chocolate flavor. It starts out a little hard straight out of the freezer but is still spoonable, and it continues to soften further as it tempers.

Bravo to B&J’s on this ganache.

Underneath it all is what I THINK is a brand new base for Ben & Jerry’s: a vanilla pudding ice cream. I don’t know if they used vanilla pudding mix or what, but this is a rather sweet vanilla ice cream that I think has more “pop” and is just more intense than their standard vanilla. It certainly achieves its intent for Dirt Cake and is really the selling point of the pint. 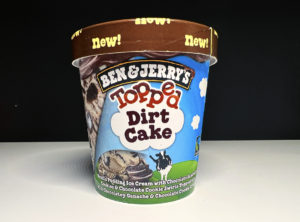 Past the toppings, the mix-ins are familiar fare for Ben & Jerry’s. We have chunks of chocolate sandwich cookies and a more gritty chocolate cookie swirl, which can be somewhat redundant but do offer a little variety on texture. Between these, the chocolate ganache, and the mountain of cookie crumbs, you’re really just left with a cookies & cream ice cream on crack.

What really stops Ben & Jerry’s Topped Dirt Cake from being a total standout is the lack of a gummy worm component. Yes, I understand gummies are a very difficult mix-in because they freeze hard, but a dirt cake without gummies is a crime against humanity. And if Nestle could figure out a way to mimic them in a freakin’ Sour Patch Kids ice cream, then Ben & Jerry’s really has no excuse. That said, I still enjoyed this more than most cookies & cream flavors and had an insanely difficult time putting it down.

How you choose to attack the ganache topping is up to you: you can gobble it all first like a candy bar appetizer, or break it up and portion it throughout the pint. I found the best way was to use a fork (yes, a fork) and eat down in sections, periodically breaking off a piece of the ganache to enjoy mixed with the ice cream.

The Ben & Jerry’s Topped line is a bona fide winner in my book; you just may want to add your own gummy worms to this one.

To contact us via e-mail, send a message to [email protected]