Here are the top best Cereal milk ice cream voted by users and compiled by us, invite you to learn together

Cereal what? That’s right, ladies and gentlemen, the silky liquid you see above on the right is called cereal milk. And on the left is an ice cream made with this cereal-infused milk, sprinkled with caramelized cornflakes. I’ve seen it on David’s blog and can’t stop thinking about it ever since. The genius behind this idea is Christina Tosi, pastry chef/owner of Milk Bar, who, as a kid, never drank milk unless it was steeped in several bowls of sweet cereal. You must have heard of her before, since she’s been widely popular for some other creations, such as Crack Pie and Compost Cookies.

Before I came across David’s post, I had already came up with a very strict schedule for the months of August and September, which didn’t really involve an ice cream post. Even the slightest deviation meant disaster.

But seriously, who cares? We are talking about ice cream here.

So, cereal milk. It sounds pretty straight forward; pour milk on top of cornflakes and let steep. But keep in mind that you’ll cook the cereal milk with yolks, combine it with heavy cream, and later churn the whole thing in an ice cream machine – all of which will dilute the taste of infused milk. That means you need a much deeper cereal taste to begin with, which is made possible by caramelizing the cornflakes. Tosi’s secret ingredient comes into play: Milk powder. She calls it the MSG of baked goods.

Toss crushed cornflakes, milk powder, sugar, salt and melted butter in a bowl, spread the mixture out on baking sheets and bake in the oven until the milk powder and sugar starts to caramelize and turn a deep golden color. 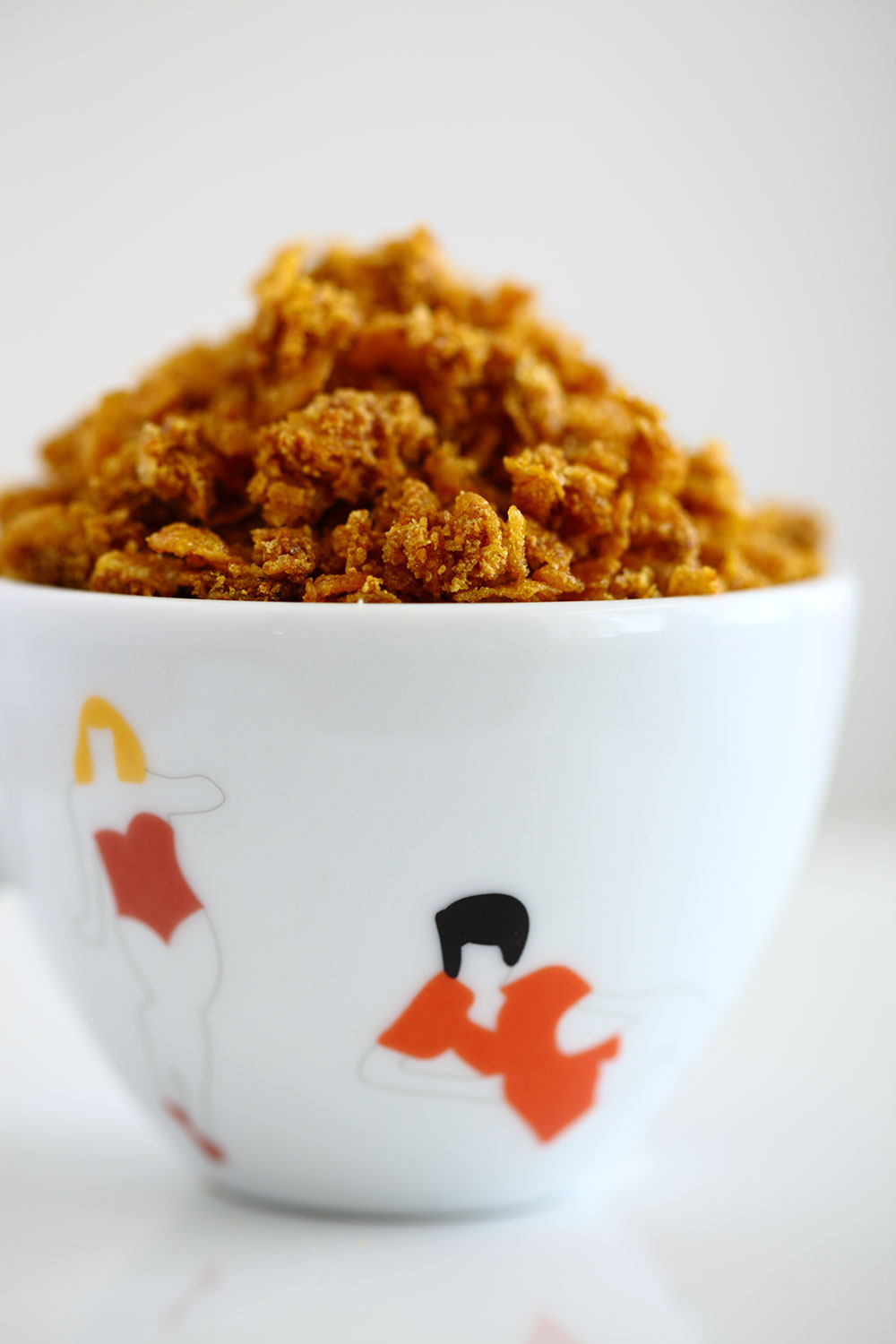 After bathing in milk for an hour and a couple of exhaustive straining sessions later, the cereal milk is ready. 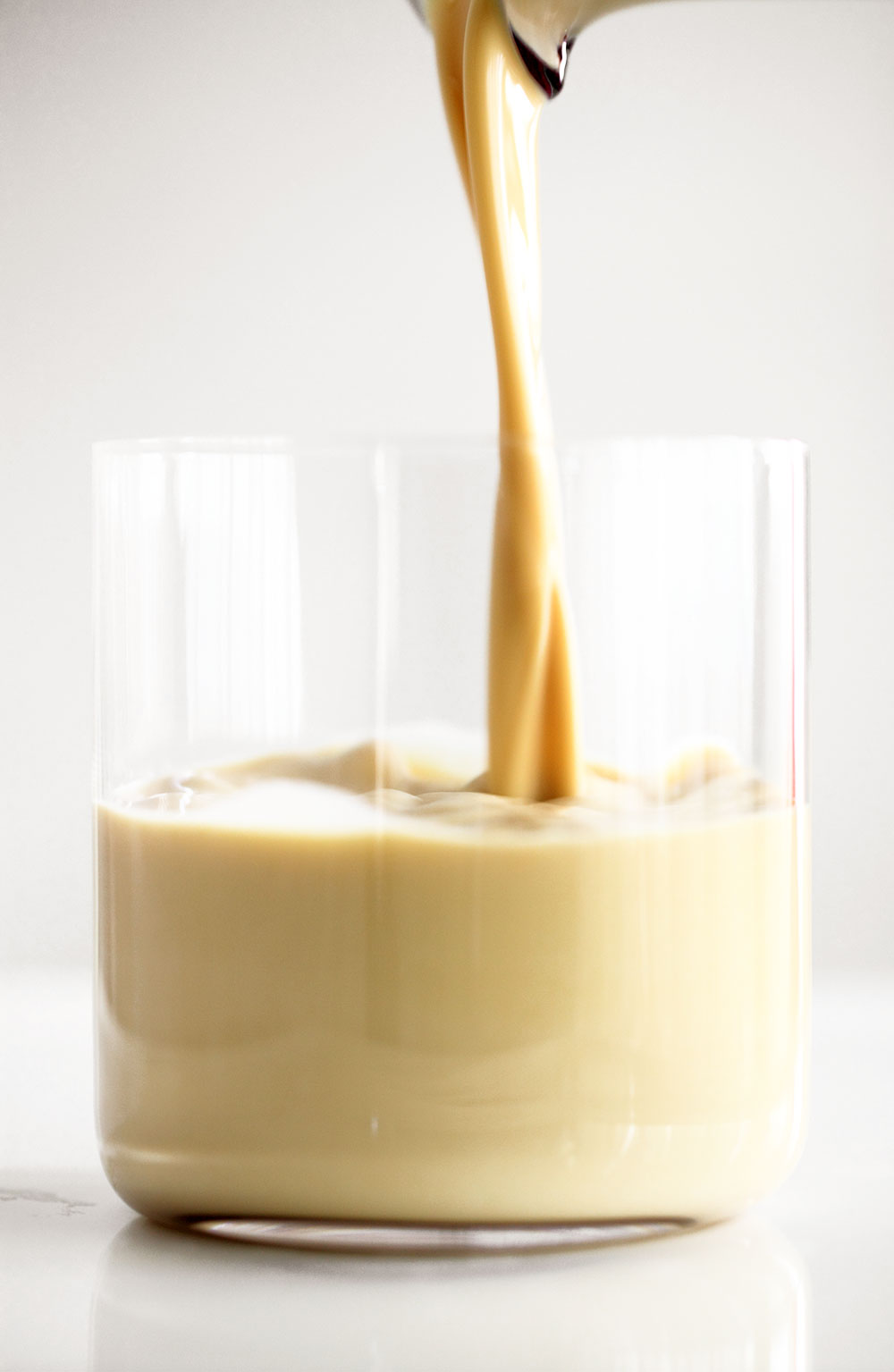 Warning: At this point in the recipe, do not (I repeat: DO NOT) taste the cereal milk. I did and had to resist this urge to down the whole glass in one gulp and it wasn’t funny. I’m serious.

And here’s another thing I’m serious about… It involves what’s left behind, which I’d like to call “cereal mud”. 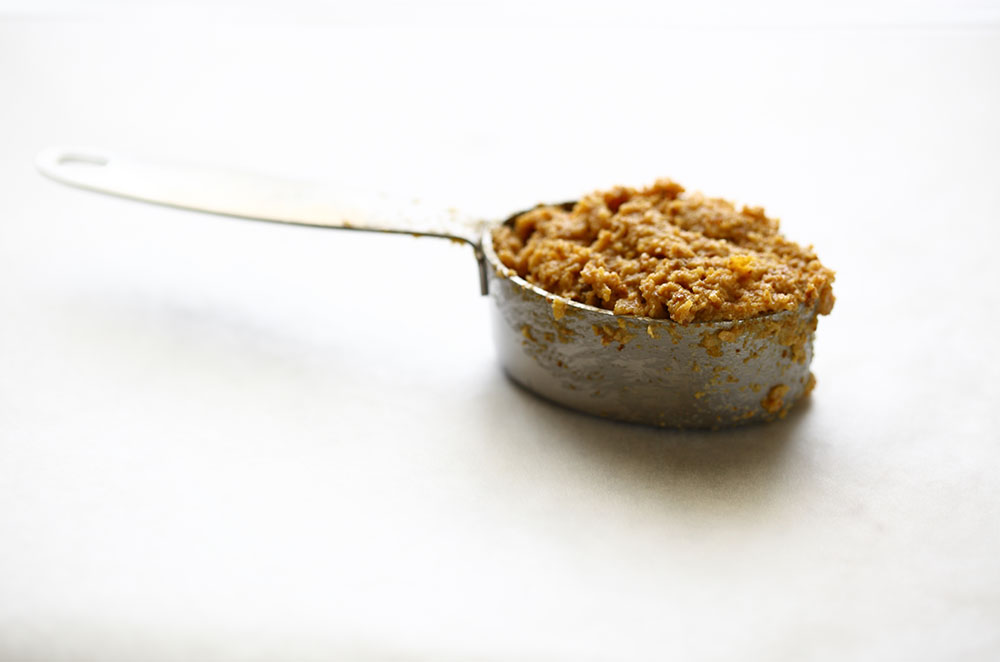 Silly me decided to go all Heston Blumenthal on this cereal mud and tried to turn it into a cereal cone.

Because I assume, as food bloggers, we are expected to get the most out of every gastronomical treasure – be it a farm animal or, in this case, a box of cereal.

I even came up with a homemade cone mold (since I don’t have one of these). I made a cone out of aluminum foil and stuffed it with rice to keep its shape while rolling. 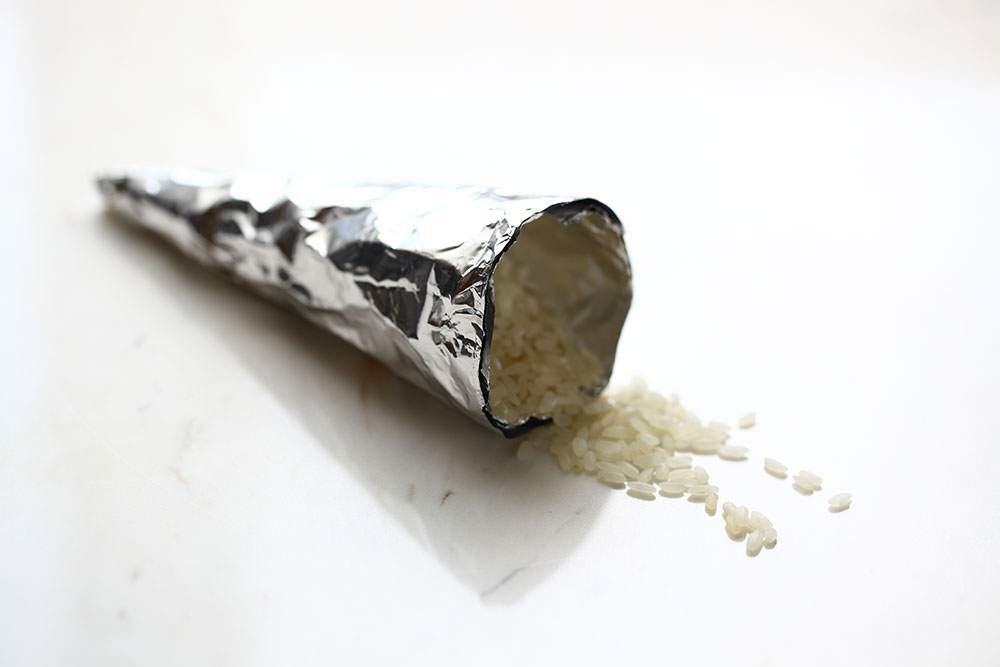 I scooped out a quarter cup of mud and spread it thin between two parchment papers: 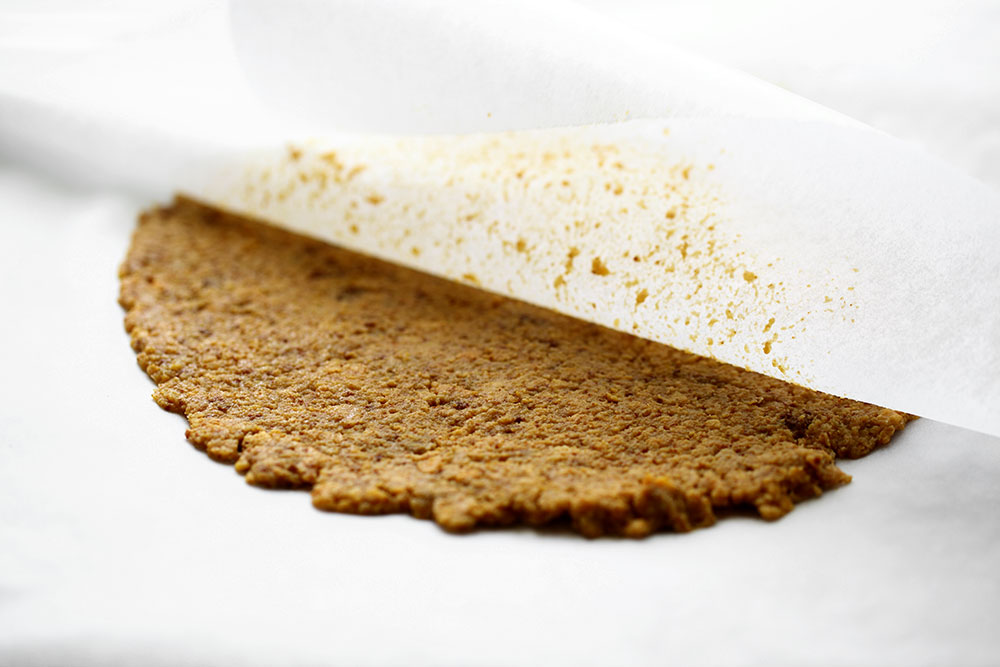 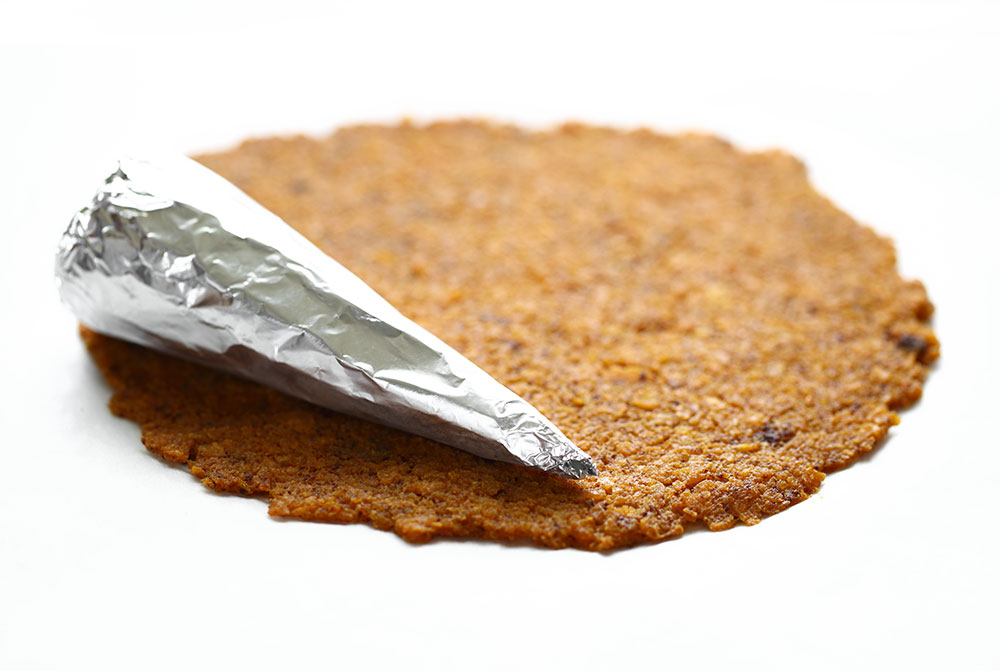 And rolled into a cone. 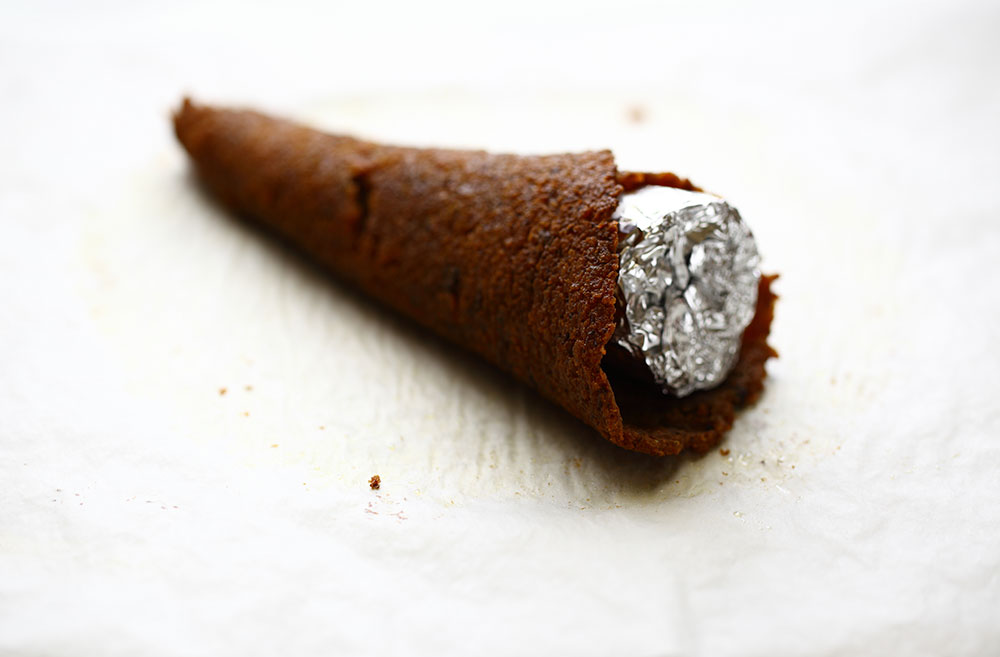 Although the shape was somewhat OK, the texture was nowhere near a respectable cone. It was way too soft. I then tried several methods: Dehydrated the mud in the fridge overnight (cracked all over after baking), 6 hours (cracked again), an hour (yes, cracked again), blended the mud, rolled it thin and baked again (same result) and then gave up. 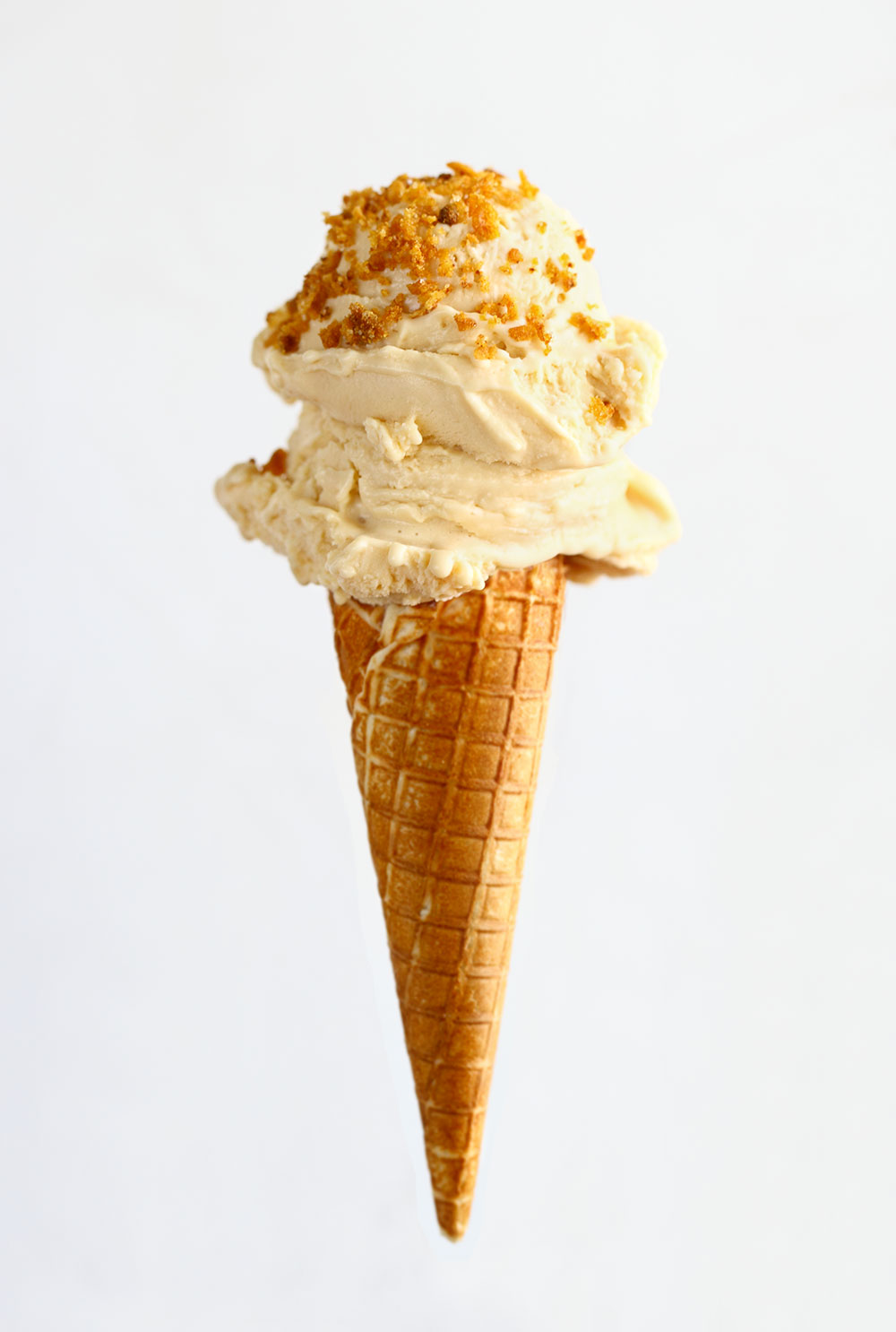 Now, if you’ll excuse me, I’ll go and think about what else to steep in milk and make ice cream. And never ever try to bake a cone again.