An easy, no churn, Mint Chocolate Chip Keto Ice Cream Recipe that’s made in a mason jar! It takes just minutes to make this low carb ice cream recipe, and the best part is you don’t even need an ice cream maker to make it. And just like store bought mint chocolate chip ice cream, this keto version is incredibly creamy, has bits of real – keto – chocolate chips, and a wonderfully refreshing hint of mint to it too. 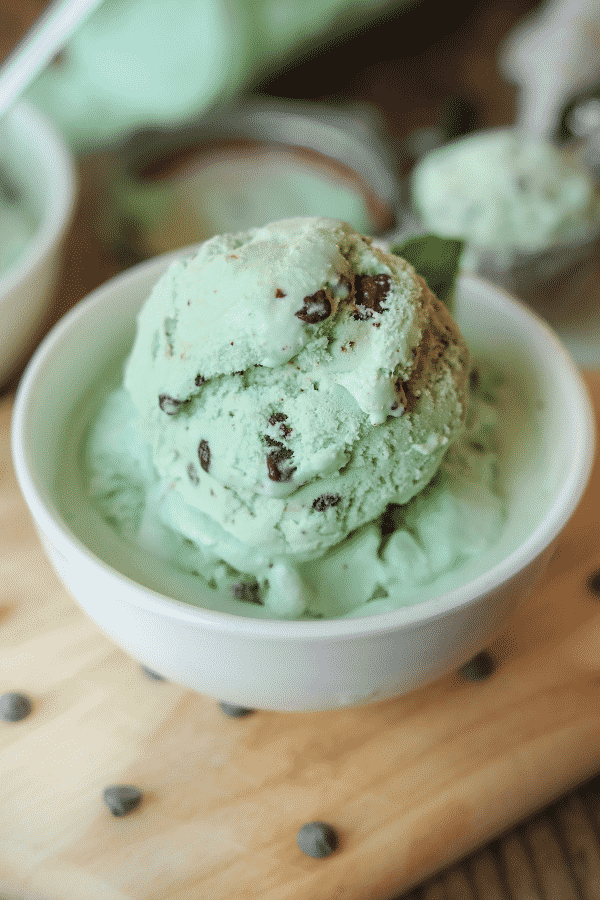 The first three recipes were the classics – chocolate, vanilla, and strawberry!

So, uh, if you want to make keto Neapolitan ice cream, check those recipes out.

My favorite thing about making ice cream in a mason jar is that you don’t need any fancy equipment to make it.

Making this stuff is EASY peasy!

All you need is about 5 minutes, a mason jar, a few simple ingredients, and a freezer.

Seriously, how easy does that sound?! 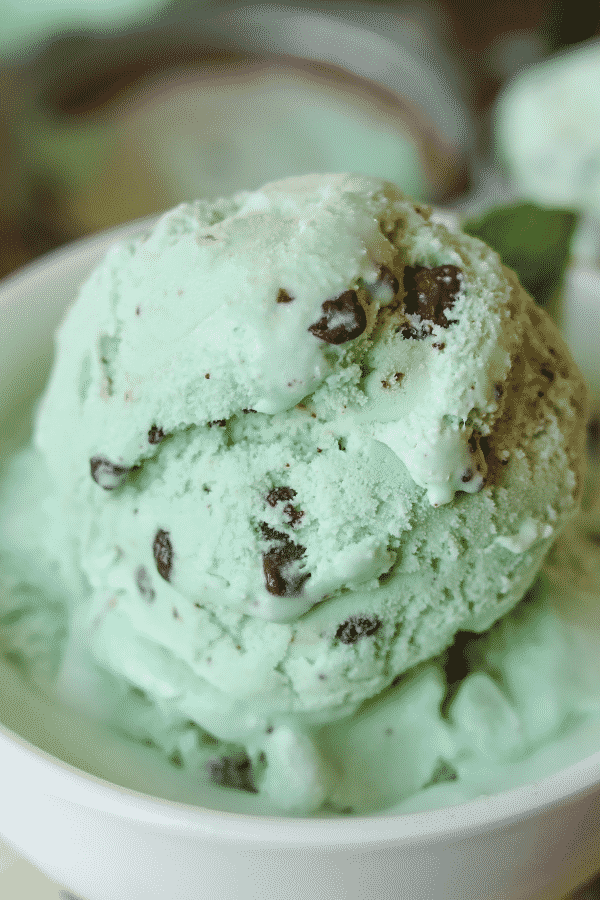 And, of course, the food coloring is optional.

I recommend using one that’s at least 16 ounces so that the ice cream fits in the jar. Having a jar that big helps you shake the cream up since there will be enough space for it to move, and therefore expand in size.

Anyways, the second most important piece of equipment – although optional – is a food scale. Weighing the ingredients out to the gram is such a HUGE help. And all of your recipes will turn out so much better if you’re able to have the accuracy of using one.

Once you’ve got those two things out, just add all of the ingredients into the mason jar, shake it vigorously for a couple of minutes, and then freeze the jar for somewhere around 4-5 hours. 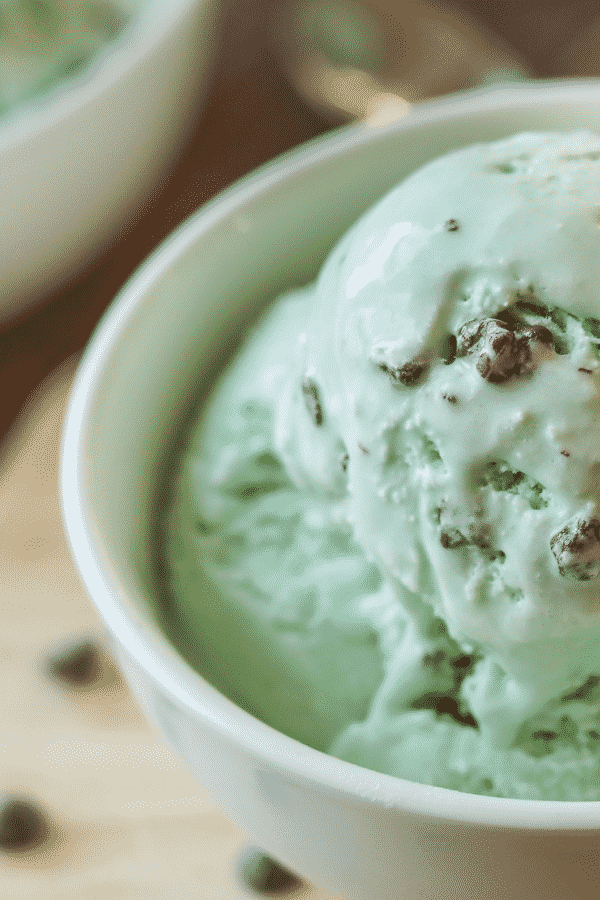 How To Store The Keto Ice Cream

This keto ice cream is definitely BEST the day that you make it. And that’s because if you’re freezing it for more than 4-5 hours it can get very hard.

However, simply replacing the Swerve with Allulose – another keto approved sweetener – can totally solve this issue!

So, if you’re planning on keeping some around the house for more than a day, give that a shot.

Oh, and of course, you can also just half the recipe, and make more of an individual serving sized portion too.

Making this Low Carb Mint Chocolate Chip Ice Cream recipe all comes down to selecting the right ingredients. So, it’s important that we go over the BEST options to use, a little more in-depth than we did before. 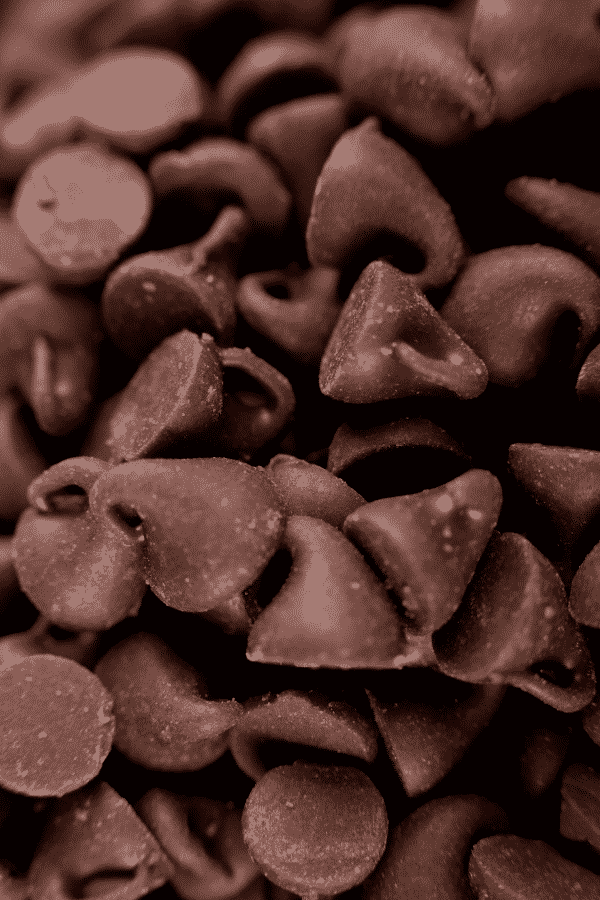 Obviously regular chocolate chips are filled with sugar and carbs. So you’ll want to avoid using those.

However, Lily’s now makes 0 NET CARB Keto Chocolate Chips. And, uh, let me tell you, they are AMAZING!

In fact, I honestly couldn’t believe these chocolate chips were low carb the first time I had them. That’s how good they are.

USE EXTRACT TO FLAVOR WITHOUT ADDING CARBS

The most keto friendly way to give the ice cream its mint flavor is to use Peppermint Extract. That’s because it’s completely sugar free. 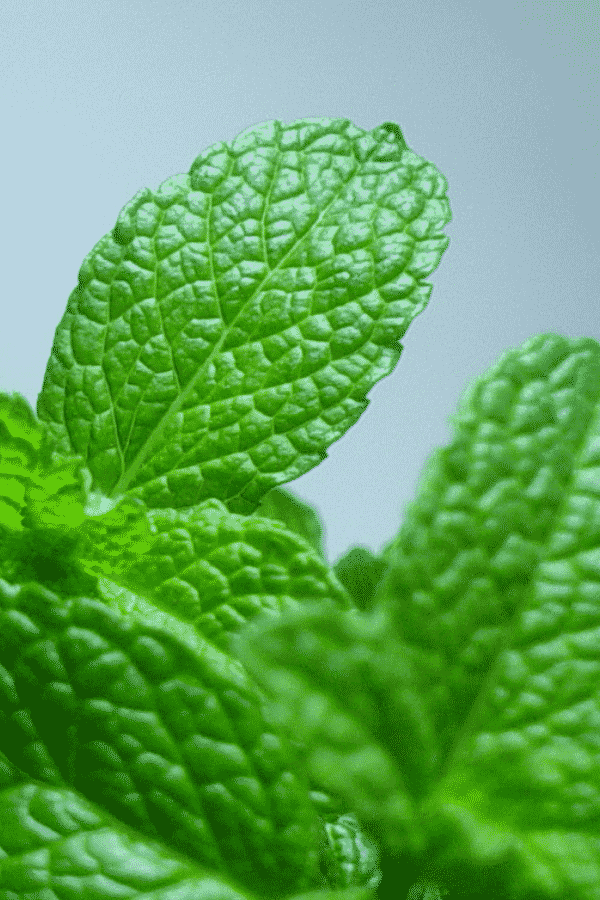 Also, a little bit of it goes a long way. You’ll only need a ¼ teaspoon of it to add the perfect amount of mint flavor to the ice cream.

Like I’ve already mentioned, you’ll want to use either Confectioners Swerve, or Allulose depending on the amount of time you’re planning on freezing it for.

Having said that, DO NOT USE stevia.

The reason for this is that stevia is MUCH sweeter than both Allulose and Swerve. You can’t substitute it on a 1:1 basis with them, and so I don’t recommend trying to use it in this keto ice cream recipe.