Here are the best information about Ice cream ships ww2 voted by readers and compiled and edited by our team, let’s find out

Did you know that ice cream and the military have a long history? In WWI the Secretary of War called it “Morale food for his louse covered men in the trenches”. World War II further popularized the dessert as the treat was great for troop morale and became somewhat of a symbol of America at the time (so much so that Italy’s Mussolini banned ice cream to avoid the association). This war time ice cream resulted in the biggest producer of ice cream in America in 1943 being the United States Armed Forces.

HOW DID IT START? 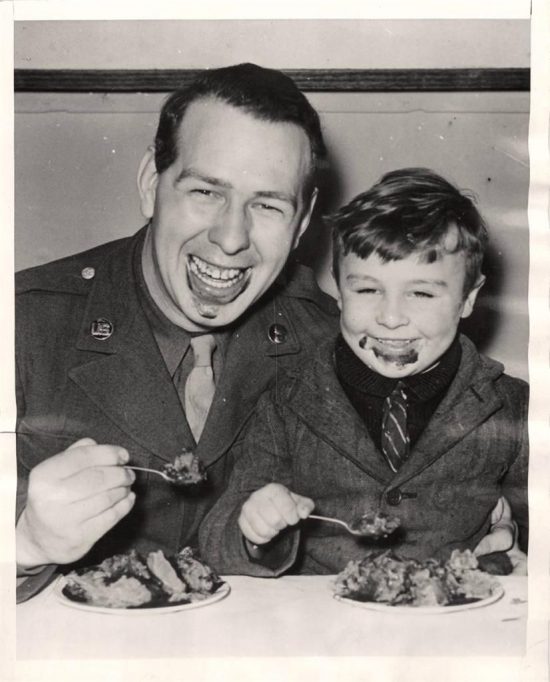 Before WWII, the military’s main focus on food was making sure that the men had enough calories every day to be able to march. Taste, and the comfort food can bring, was made irrelevant by the severe shortages. However, the ice cream industry, along with the medical profession, tried to lobby for hospitals to be able to offer ice cream to the wounded. Unfortunately, the extreme lack of sugar shot that campaign down. Instead of bolstering ice cream production. Hoover’s Food Administration ordered a reduction of manufacturing domestically—ruling in the summer of 1918 that “ice cream is no longer considered so essential as to justify the free use of sugar in its manufacture.”

That would change drastically, however, in the years to come. Ironically, Prohibition proved to be the impetus of an ice cream boom in America. When Prohibition was declared, many American breweries, including Yuengling and Anheuser-Busch, turned to soda and ice cream to stay in business. By 1930, Americans were eating more than one million gallons of ice cream per day – and more importantly, associating it with the comfort and diversion they had applied to alcohol.

When World War II hit, European countries once again banned ice cream as being a wasteful use of sugar. (Britain went so far as to endorse carrots on a stick as a substitute!) Not so the red, white and blue. After Pearl Harbor, Americans were going to war. But they were taking their ice cream with them.

All branches of the US Military offered ice cream, to some extent, to their soldiers. The US Navy had some of the most interesting ice cream driven projects. The most well known was spending $1 m 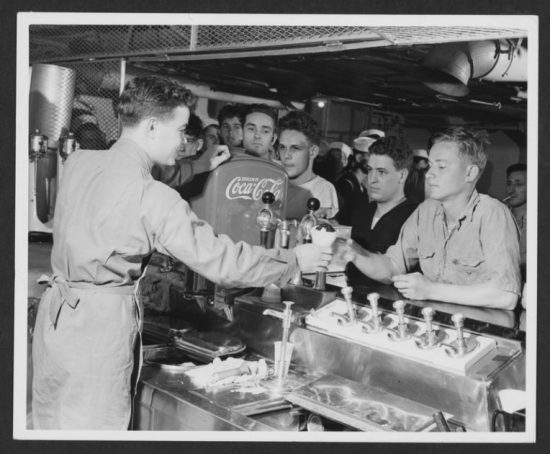 illion dollars to convert a concrete barge into a floating ice cream factory. It held more than 2,000 gallons of ice cream and churned out 10 gallons every seven minutes. It was towed around the Pacific, delivering ice cream to ships that didn’t have the equipment to make it onboard. Ships that did have equipment would also be fitted with soda fountains to give the men not just the taste, but the feel of home. Not to be outdone, the US Army constructed mini ice cream factories on the front lines and deliveries individual cartons of ice cream to soldiers in their foxholes. This was in addition to the hundreds of millions of gallons of ice cream mix they made annually. At their peak, they shipped 135 million pounds of dehydrated ice cream in a single year.

To understand how important ice cream was to the morale of the average sailor or soldier, consider the case of the USS Lexington. In 1942, right before the crew of the USS Lexington abandoned ship, they broke into the ship’s locked freezer, and drained every single ice cream container dry—as the vessel was sinking from torpedoes.

ICE CREAM IN THE AIR 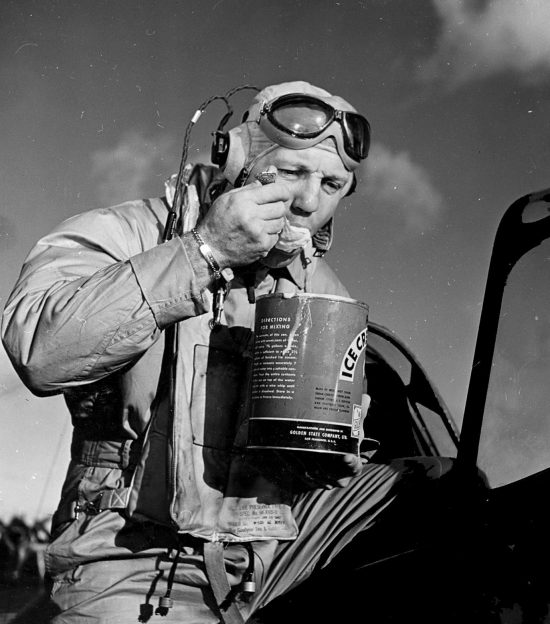 If you’ve made ice cream at home before, you know that churning the ice cream, which makes it the smooth, creamy treat we all love, is a vital step. In 1943, ingenious bomber crews began to experiment with creating their own ice cream, mid-air! Squadron Commander J. Hunter Reinburg thought he could raise the moral of his Marines if they could turn one of his bombers into an ice cream machine. Using the vibrations of the engine to churn the ice cream, along with the cold temperatures from the high altitudes, he surmised it would work. It took a little bit of trial and error (and a couple of goopy messes) before they discovered that attaching the tub to the rear gunner’s compartment allowed for it to stay cold enough, and had the added benefit of churning it from the vibrations from the machine gun fire.

In the 1940s, there was no good way to rescue a downed pilot from an air craft carrier. Even if the giant ships could pull up next to a swimming pilot, the water displacement would likely swamp and drown him. And stopping to rescue a pilot would temporarily stop air launches. So carrier crews came up with an ingenious way to make sure the smaller ships were on the lookout for their pilots. They offered a bounty for every returned pilot – in ice cream! The exact amount of ice cream transferred was different for different carriers, and it seems to have changed over time. But Daniel W. Klohs was a sailor on the USS Hancock in World War II, and he remembered being on the bridge the first time a destroyer brought back a pilot: 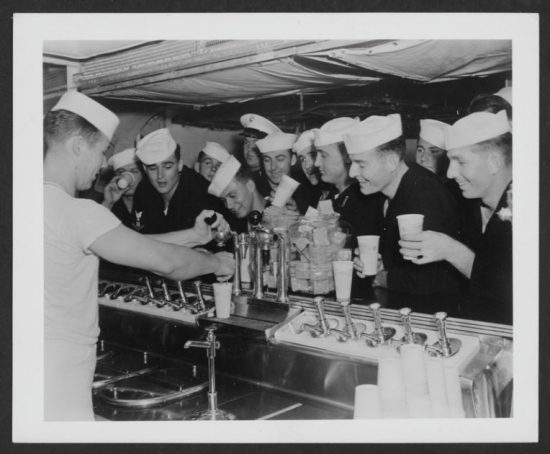 “I told the captain (Hickey) that it was customary to award the DD with 25 gallons of ice cream for the crew and two bottles of whiskey for the Capt. and Exec. We ended up giving 30 gallons of ice cream because it was packed in 10-gallon containers. This set a new precedent for the return of aviators.”

Obviously, the rescues would probably have happened anyway, but the carriers crew figured that the temptation of ice cream might help their pilot’s chances in the water. And while some submarines and other vessels had their own ice cream, it was a rare treat in most of the deployed Navy and Army. But carriers had massive freezers and stockpiles of the sweet treat.

Lt. Cmdr. Norman P. Stark was one of these pilots. Shot down in a Hellcat over Okinawa, he was rescued from the ocean by a floatplane. He was then transferred to a destroyer, whose crew was very happy to see him. He remembered “After disembarking from the canvas bag, I was greeted like a long lost brother. What I didn’t realize at the time, was that they weren’t seeing me, but what I was worth to them-10 gallons of ice cream. Destroyer crews loved to rescue pilots. A pilot returned to his carrier was exchanged for 10 gallons of ice cream.”

When the war ended, and dairy product rationing was lifted, America celebrated its victory with ice cream. Americans consumed over 20 quarts of ice cream per person in 1946. Even after ice cream’s WWII heyday, it was an intrinsic part of military life. During the Korean War, General Lewis B. “Chesty” Puller tried to convince the Pentagon that ice cream was 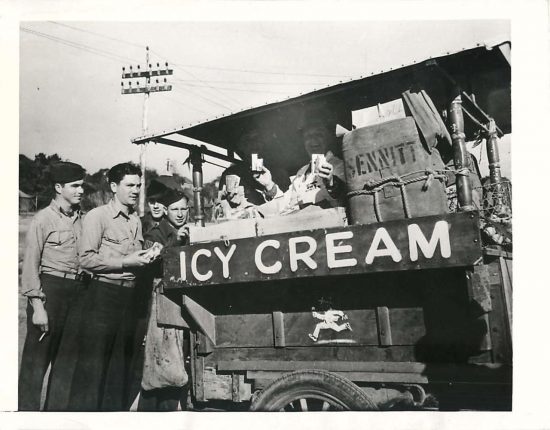 “sissy food” and that soldiers would be tougher if fed more manly indulgences, namely beer and whiskey. The Pentagon responded with an official statement ensuring soldiers were served ice cream a minimum of three times a week.

So why is ice cream such an important part of military service? We think it’s because it reminds us of better times, of home and the comfort that it brings. It invokes happy childhood memories and makes us feel good. So, this Memorial Day, lift up a spoon of your favorite ice cream in memory of the many men and women who have served our nation.