Ice Cream  »  What is in gelato ice cream

Authentic Italian Gelato is a frozen creamy dessert made with milk, heavy cream and sugar. With or without eggs (depending on the taste), you can make dense creamy gelato at home, following a slow freezing/creaming process, usually with the help of an ice cream maker.

Gelato in Italy is a true passion and a very rooted tradition. You can find Gelato on sale in many shops called “Gelateria” present in large quantities in all Italian cities, even in the smallest ones.

They serve Gelato is in small cups or in crunchy waffle cones and you can enjoy it while walking and chatting quietly. This is one of the most common habits widespread and loved in Italy, especially on hot summer days. The good news is that you can make authentic Italian Gelato at home. You have only to learn the right tricks to easily make it. Usually we make homemade gelato to eat as a dessert or as a delicious afternoon snack. You can also enjoy Gelato with fresh fruits or delicious biscuits.

If you love Authentic Italian Gelato and want to do it at home, here is the recipe with all the tips and tricks for making an exquisite, healthy and genuine homemade Gelato, both with and without ice cream maker!

This is the basic gelato recipe. With this recipe you can make all kinds of gelato you prefer. This type of gelato in Italy is called “Gelato alla Crema”.

So now let’s show you how to make authentic Italian Gelato at home!

Surely the most useful tool for making authentic Italian gelato is an ice cream maker or Gelatiera. There are various types of Gelato makers, but the best is the one that has a compressor that cools while blending the Gelato. We recommend Whynter Automatic Ice Cream Maker.

This type of machine is very similar to the professional one. Of course it’s a little more expensive but with this gelato maker you will have a perfect Italian Gelato and – above all – in quite a short time.

Other types of gelato makers, without a compressor, plan to keep the special container of the machine in the freezer many hours ahead of time to cool the ingredients while mixing them, but its autonomy is quite short. We recommend Cuisinart Automatic Frozen Yogurt, Sorbet, and Ice Cream Maker which in our opinion is inexpensive and practical. Making Gelato without an ice cream maker: the result will still be good if you follow our recipe well. In this case you will need a gelato container. This is useful in any case even if you don’t eat immediately all the gelato, even made with the ice cream maker.

Other accessories to serve your homemade gelato can be the tool to make the ice cream scoops or the handy scoops to make sundaes of gelato. Finally the waffle cones that kids love so much!

How to Make Authentic Italian Gelato WITH Ice Cream Maker

How to Make Authentic Italian Gelato WITHOUT Ice Cream Maker

If you don’t have a gelato maker, don’t worry! We are going to show you how to make Italian gelato without the help of an ice cream maker. It takes more time (5 hours instead of about 40 minutes) and more work but the result is still exceptional! Let’s see how to do it!

One of the reasons authentic Italian gelato tastes so good is because it’s fresh. So make gelato and eat it right away. If you leave it in the freezer for too long, crunchy ice crystals form and your gelato is no longer so good. So eat your homemade gelato immediately or within two days of making it.

Tip: if your gelato is too hard and frozen, let it thaw in the refrigerator for 10-15 minutes before serving. What’s the Difference Between Gelato and Ice Cream?

Very often “Gelato” and “Ice Cream” are used to describe the same dessert. But are you sure that they are really the exact same thing?

Many think that “Gelato” is simply the Italian translation of the English “Ice Cream”, but in reality these two products are different. The differences between these two frozen treats depend on four basic factors: fat content, ingredients, air and temperature.

Gelato has a lower fat content. Butterfat + fats that come from dried fruit or other origin, do not exceed 8%, of which at least 3.5% butterfat (cream and milk fat). Ice cream, on the other hand, according to the FDA, has a higher butterfat content than gelato: in fact, it cannot be less than 10%.

Gelato is made using mainly fresh milk and fresh heavy cream. Instead, powdered milk and vegetable fats are generally used for the production of ice cream.

Gelato melts faster because it contains less air. Ice Cream, on the other hand, melts more slowly thanks to the insulating effect of the air: the law allows it to incorporate air up to 100% of its weight.

Gelato has lower storage temperatures, which is why it must be eaten immediately. While ice cream is stored at low temperatures in the freezer as if it were frozen food and, to ensure its durability, it is necessary to add preservatives.

In short, gelato is not just a dessert, it’s a delight for the palate, rich in taste, healthy and nutritious. 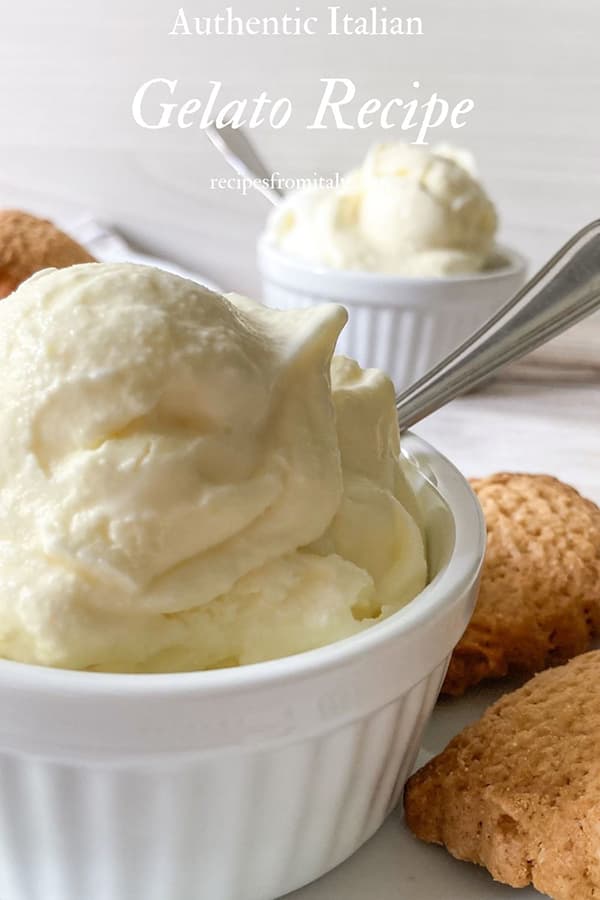 Is it Even Possible to Make Vegan Gelato?

As we have said, the fundamental ingredients of authentic Italian gelato are whole milk, heavy cream, egg yolks and sugar.

Obviously you can safely replace whole milk with vegetable drinks such as soy milk, almond or rice milk.

It’s less simple to find substitutes for the butterfat of the heavy cream. Butterfat is essential to give Gelato its thick creamy consistency. You can use thickeners such as carob flour or tara gum.

If you want to flavor your gelato, you can choose dried fruit extracts that naturally contain vegetable oils. Those make gelato very creamy. For example you can try hazelnut or pistachio paste, or use very creamy fruits such as avocado and banana.

About the eggs. Don’t use them. That’s easy.

For a dairy-free option similar to Gelato, try Sorbetto, a frozen Italian dessert that replaces milk and cream with fruit juices and sweetened water. It follows the same creaming method as Gelato.

Fior di Latte is made with only fresh whole milk, heavy cream and sugar. Due to its creamy consistency and delicate-neutral taste, it can be easily matched with other ingredients, such as chocolate or strawberries. For example Stracciatella Gelato is made with Fior di Latte + pieces of dark chocolate. A treat for the taste buds! 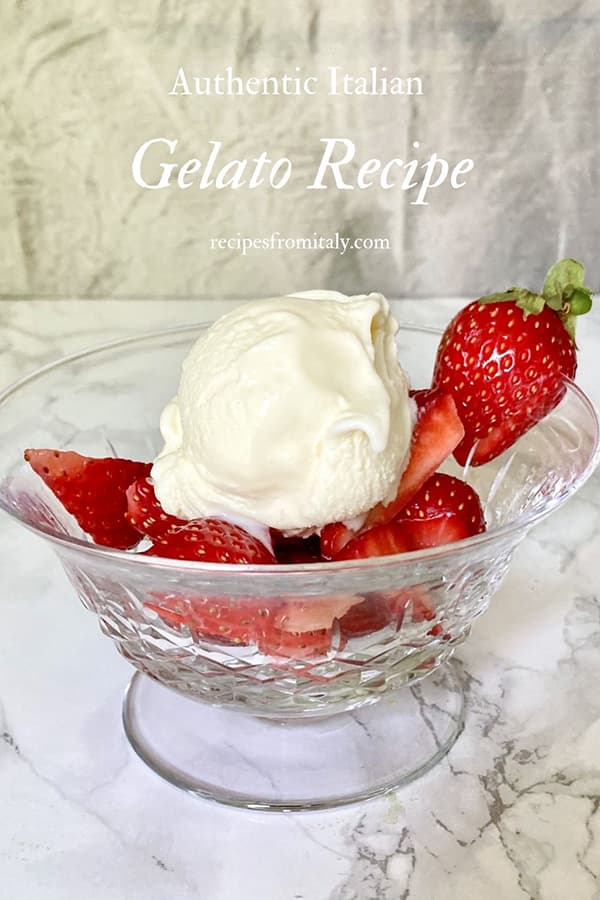 One of the first historical documents in which we speak of “gelato”, comes to us from a Greek poet who lived in 500 BC in Athens. The Greeks loved making their refreshing drinks with a little lemon, honey and lots of pomegranate juice with snow or ice.

If we move to Arabia, we discover that each iced drink was already called “sorbet”, hence the Italian word Sorbetto. The Arabs in Sicily mixed the snow of Etna with fruit juices, creating what can be considered the ancestor of our homemade gelato.

The birth of gelato with milk and cream is quite recent. It was born around the year 1565, at the court of Caterina de’ Medici, in Florence, thanks to the architect Bernardo Buontalenti, known as Mastro Bernardo delle Girandole, who makes an almost frozen sorbetto using snow, lemons, sugar, egg white and milk.

Then, in 1686, the enterprising Sicilian Francesco Procopio, who moved to Paris, inaugurated the “Café Procope”, which still exists, where he creates a new recipe for making sorbetto-gelato using fruit, honey, sugar and ice.

In 1770, gelato recipe lands in America, when Giovanni Basiolo takes it to New York.

Another important step in the production and popularization of gelato comes from the United States, where Nancy Johnson, from New Jersey, in 1846 developed the first gelato maker.

Gelato has certainly become one of the most popular and well-known desserts in the world thanks to its goodness and the genuineness of its ingredients. 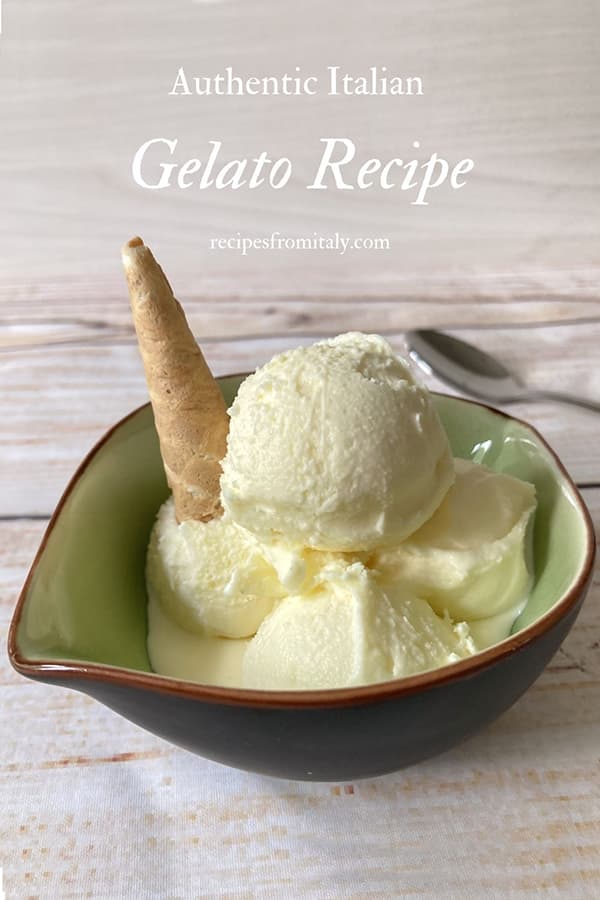