It’s no great secret that our innovative brothers and sisters across the Pacific are always about fifty steps ahead of American imaginations when it comes to dreaming up new desserts. From towering piles of honey-soaked toast drowning in whipped cream to rich coconut pies sold on street corners, Asian imaginations appear to know no bounds when it comes to crafting up new desserts. Sometimes this process just involves a new take on an old concept, like say, the Thai sensation of rolled ice cream.

Thai ice cream is a made-for-Instagram dessert that is finally taking over cities across America. Imagine ice cream cups stuffed with tiny skyscrapers of rolled ice cream rosettes, topped with all manner of over-the-top ingredients, from gummy worms and waffle pieces to Lucky Charms marshmallows.

The trendy dessert practically begs to be photographed and #humblebragged about. And it is!

Shops assemble the dessert – usually made of either dairy, coconut or almond milk – right in front of you by pouring a liquid ice cream base out onto a metal disc or plate called an ‘ice grill’ that is kept at temperatures below freezing. In Thailand, Malaysia and the Philippines, where rolled ice cream is usually sold out of street food carts or hawker stalls, dry ice is used to keep the metal arctic cold. Here stateside, ice cream shops generally hard-wire coolant and electricity into their counters to more efficiently produce the same result.

However the grill is chilled, once the liquid hits the surface, it begins to freeze. The preparer almost immediately then begins manipulating the rapidly-freezing cream with a pair of spatulas, spreading it across the entire surface – kind of like a cross between the way crepes are made and the way Cold Stone Creamery prepares its ice cream. Because of the constant handwork that goes into manipulating the stuff, rolled ice cream’s direct predecessor was first called stir-fried ice cream.

After the cream is sufficiently iced, the spatulas are used to cut the thin frisbee into strips, each a couple inches wide. Each strip is then, you guessed it, rolled into something akin to a short cigar. Once a cup is stacked with a couple of vertical rolls, they resemble a tiny cityscape of rosettes. 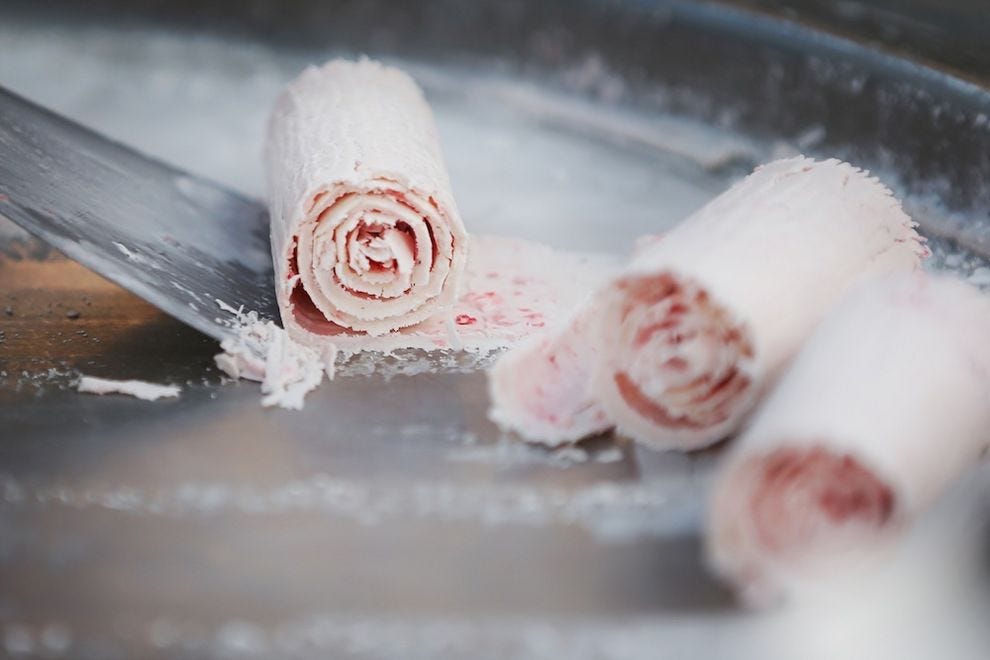 Stir-fried ice cream first began popping up across Thailand in 2009. But it took another two or three years for the perfect storm of videos, social media, and the added panache of rolling the finished product into its signature silos to transform the dessert into a full-blown sensation.

Today, Thai rolled ice cream comes in just about any flavor you can imagine. You’ve of course got the classics like vanilla, chocolate and strawberry holding court in most rolled ice cream parlors. But something about this particular dessert, whether its Thai roots or Lincoln Log-like vertical assembly, begs confectioners to go a step further. Rose, lychee and matcha cups are sprinkled across Instagram, along with decidedly more obscure flavors like french fry, chicken nugget and Flamin’ Hot Cheetos.

Sometimes it can take a real scorcher of a day on vacation, lazily strolling through town or down a boardwalk with an ice cream in your hand to truly appreciate how fantastic Thai ice cream really is. If nothing else, it restores some of the sense of wonder to everyone’s favorite frozen treat, even if “I roll, you roll, we all roll…” doesn’t have quite the same ring to it.