Below is a list of the best Ice cream speakeasy denver voted by users and compiled by us, invite you to learn together

Colorado is known for craft beer, but that doesn’t mean there’s any shortage of cocktail, hidden bars and speakeasies in Denver. The craft cocktail and neo-speakeasy wave hit Denver, but one of these bars opened the literal day after prohibition ended and another is hidden in an ice cream shop. What is a speakeasy?

Speakeasies came about during the national prohibition of alcohol in the United States (1920-1933), as the Temperance Movement gained traction across Britain and its territories (including former ones, like the US). Notably, drinking alcohol wasn’t illegal, just the production and sale of it were. The “noble experiment” of prohibition failed and speakeasies popped up.

But it wasn’t just about hiding in basements and down mysterious hallways. Speakeasies birthed cocktail creativity (namely because they needed to cover up the tastes that came from illegal hooch). To stand out from the competition, they also featured live music.

Neo-speakeasies: what is a modern (post-Prohibition) speakeasy?

The hallmark of speakeasy bars is that they were secret. So, the fact that we know about these bars and can even find their locations on Google Maps means that they aren’t the traditional definition of a speakeasy.

MILLERS & ROSSI is Denver’s latest speakeasy and bills itself as a contemporary art speakeasy. Not only is it in the RiNo art district, but it is in a gallery. So you can check out the artwork and photography and then slip through a frame to have a cocktail.

Ste. Ellie closed in December of 2019 and was located behind an unmarked glass door, underneath the popular Colt & Gray. This Riverfront North bar was listed in 303 Magazine’s Coziest Cocktail Bars and is marked by its more laid-back feel. Adding to the speakeasy feel are the dim lighting and craft cocktails.

Low lighting, warm woods and leather make Williams & Graham a contrast to modern bars filled with metal and minimalism. This bar has the speakeasy hallmark false entrance in the bookstore. Probably the most famous of Denver’s “hidden” bars, but the only one surrounded by books.

Uptown’s Retrograde fancies itself a “discreet cocktail bar.” It shares owners and property with Frozen Matter. When the owners had extra room from their ice cream parlor, they added Retrograde to create alcohol-infused ice creams and develop unique cocktails. Head to the back of the creamery to the stainless-steel door and ring the bell to get in. It only seats 35 people, so this is on the small end.

A speakeasy in an ice cream shop is especially fitting as during prohibition, both Yuengling and Anheuser Busch refitted their breweries so they could make ice cream to keep their businesses alive.

Green Russell is one of Denver’s first neo-speakeasies, following in the blueprint of neo-speakeasies in LA and New York. It feels like being in another decade, and has a warm vibe and antique décor, with each table having its own style. It is definitely known for its food and creative craft cocktails.

B&GC wasn’t opened with the intent of being a speakeasy per se, but more of a “hideaway” bar. Though it still bears a striking resemblance to a speakeasy with no signage, a need for reservations (that you have to text to request, no phone calls), ringing a mysterious doorbell. This one isn’t on Google Maps, but is at the Halycon Hotel.

They have ducked allowing photographers in, but 303 Magazine was allowed to show what’s inside. Text 720-925-8598 for a reservation (don’t call).

Despite being the longest-running bar and first post-Prohibition bar in Denver (they literally opened the day after it was repealed), The Cruise Room is often looked over, even by locals. The bar/cocktail lounge is known for its martini, but produces a variety of high-quality cocktails. It is narrow and can be a bit tight-packed, but feels like a step back in time.

Prohibition sounds like it should be a speakeasy, but it’s pretty much a regular bar. It is designed to be a classic bar with classic cocktails, but warm and friendly like its home, Capitol Hill. The menu features whiskey “prescriptions” and the décor includes a bar-top from a 100-year-old saloon and old newspapers on the wall. 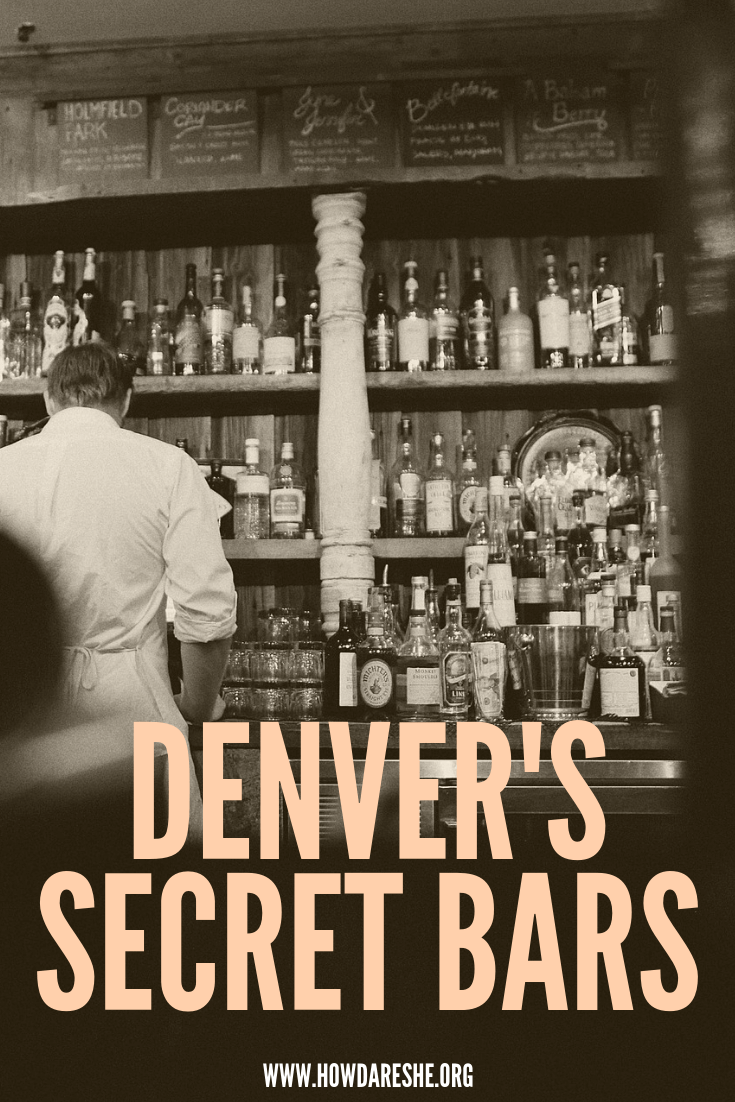