Ice Cream  »  How is custard different from ice cream

Is there anything more satisfying than a sweet, frosty dessert on a warm summer day? Whether you need to cool down from the heat or chill out after working out, frozen custard and ice cream are two frozen treats that always get the job done!

Sometimes the names of these two yummy desserts appear to be used interchangeably, while other times they are presented as being quite distinct from one another. So, what’s the deal with frozen custard vs. ice cream? Are they the same?

While both of these sweet treats do hit the same note, there are indeed some very specific characteristics which set them apart. Let’s get into one of the tastiest comparison articles you’ll find anywhere and learn all about frozen custard and ice cream. 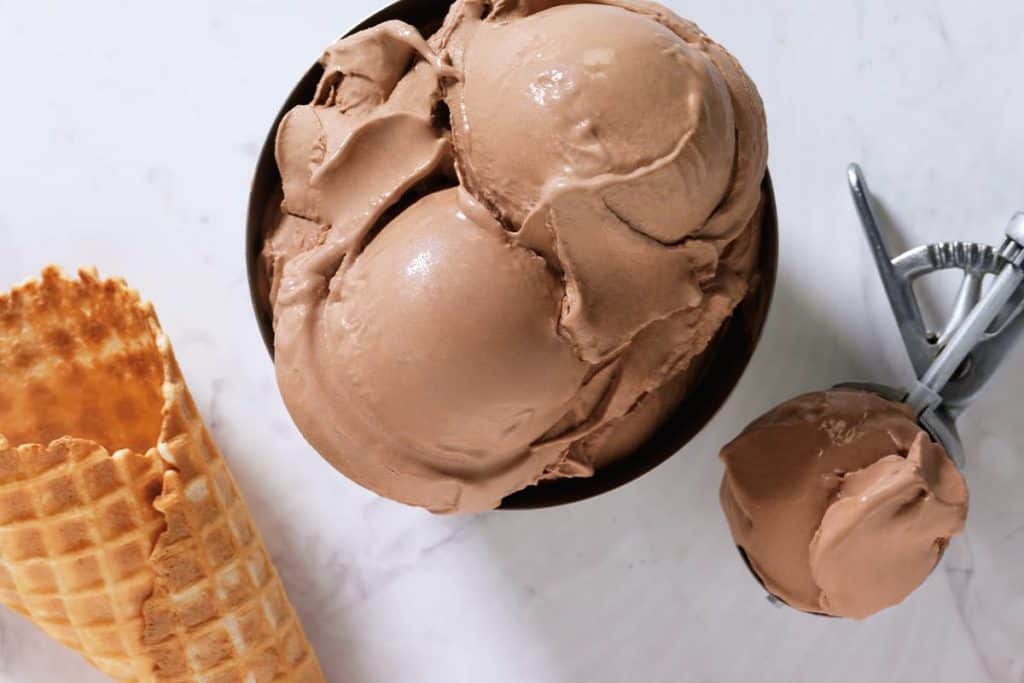 Frozen custard and ice cream share a base of the same ingredients: milk, cream, and sugar. In fact, both of these products even have just about the same milkfat as one another. However, the main difference between the composition of these two dishes lies in the inclusion of one single ingredient: eggs.

In addition to the basic ingredients mentioned above, frozen custard is required to include egg yolks, which act as a thickener and stabilizer. According to the Food and Drug Administration regulations, custard must contain at least 1.4 percent egg yolks in order to qualify as a frozen custard.

But wait, doesn’t ice cream contain egg yolks too? Sometimes, yes! However, it is not required, and therefore some ice cream recipes may contain less than the 1.4 percent threshold while others may contain no egg products whatsoever. Any ice cream product that surpasses the 1.4 percent egg yolk threshold can no longer be called ice cream and shall be then known as frozen custard instead.

Custard vs. Ice Cream: How Are They Made 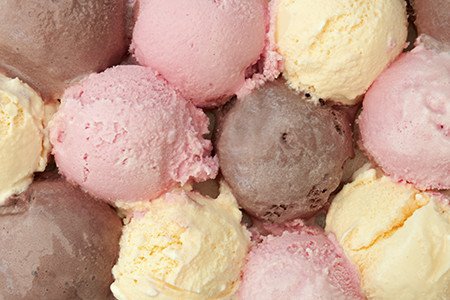 While both of these desserts are made by way of a machine that churns the ingredient mixture as it freezes, there are some key differences. Namely, how much air (known as overrun) is incorporated during the freezing process.

It’s important to note that frozen custard cannot be made using a standard ice cream machine. Part of what makes frozen custard distinct is that it contains a relatively low amount of air, therefore frozen custard machines are specifically designed to incorporate less air into the frozen custard mixture as it churns and freezes.

Ice cream on the other hand, has significantly more air mixed into it during the freezing process. Where frozen custard machines average around 20 percent overrun, the average ice cream maker may run at up to 100 percent overrun! This increase in the amount of air also means larger ice crystals are able to form within the ice cream base as it freezes. 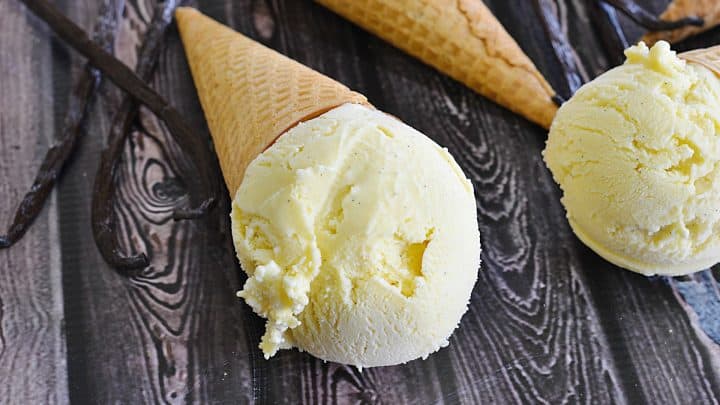 Finally, we arrive at the category of differences that perhaps matters most to you: taste and texture! It’s all well and good to understand how these products are made and what they contain, but arguably the most vital differences are those that you can see and feel for yourself as you sample your way through these frozen treats.

Due to the fact that frozen custard contains less air and smaller, nearly unidentifiable ice crystallization, the resultant texture is ultra-dense, creamy, and almost silky. The flavor of custard is also extra-rich thanks to the presence of those egg yolks. This special texture is easily disturbed by the conditions of a regular freezer, therefore frozen custard is best enjoyed straight from the machine or at one of your favorite custard stands!

As we learned above, ice cream has far more air whipped into it than frozen custard and therefore has an extremely light and fluffy texture as compared to the heavy, creamy texture of frozen custard. The flavor of ice cream also tends to vary more widely, as many ice creams do contain eggs and there are many different combinations of dairy products that can add up to make ice cream, from nonfat milk to heavy cream and anywhere in between. 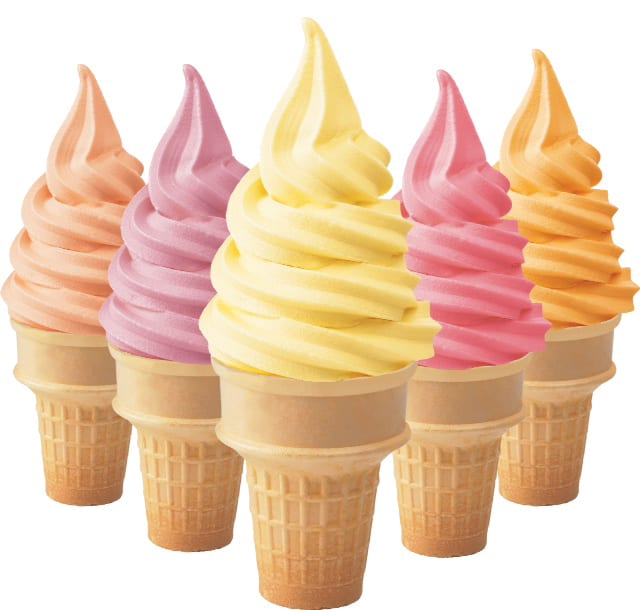 There is a wide world of frozen treats out there to tingle your taste buds! Here are several other common treats you’ll find in the freezer section, and how to tell them apart from the custard and ice cream we’ve already covered.

Also read: What’s the Difference Between Custard and Ice Cream?

Soft serve ice cream is one delicious treat! This ice cream product may contain just about the same ingredients and air content as regular ice cream, however it is the type of machine which gives it the unique texture. As a soft serve machine churns, it keeps things at a slightly warmer temperature than you’d find within standard ice cream makers. This is what gives soft serve it’s creamy, nearly melty texture!

Gelato typically does not contain eggs, and unlike both ice cream and custard, gelato tends not to be cream based but rather it is made with milk instead. This gives the final product an overall lower fat content. In contrast to typical ice cream machines, gelato machines also incorporate a significantly smaller amount of overrun into the final product. Therefore, a scoop of gelato is much denser and more concentrated.

Frozen yogurt is, well, yogurt that is frozen! The frozen dessert may not be entirely yogurt however, oftentimes a portion of the dairy ingredients are replaced with yogurt while cream or milk are still included for textural reasons. The amount of yogurt in this dessert can vary, but often it will be detectable by the pleasant tang you’d notice upon tasting it!

It makes sense to think that frozen yogurt would be a healthier alternative to other ice creams and gelatos, however this is not always the case. This treat may contain just as much, if not more, sugar and fat content as regular ice cream therefore it’s worth taking a look at the ingredients to see for yourself!

Thanks to advances in product availability and food technology, there is an increasingly large market of dairy free frozen dessert options out there. Many of these are vegan and lactose free, as opposed to your standard frozen dairy dessert which will no-doubt contain animal products as well as a hefty dose of lactose. When you have a food allergy, prefer to eat plant based, or simply like the great taste of these options, dairy free frozen desserts are worth a try! You can even make them at home, such as our Homemade Vegan Strawberry Ice Cream.

Reviewing the Differences Between Custard and Ice Cream

Frozen custard and ice cream are both dairy-based, frozen desserts yet they have a few key distinctions which are easy to remember!

If neither of these dessert options suit you, fear not. There are plenty of other frozen dessert options to choose, from frozen yogurt and gelato to soft serve ice cream and dairy-free desserts galore!