This paleo, keto, gluten-free, and Whole30 Chinese Beef Noodle Soup is a comforting dish that you can easily make in an Instant Pot or on the stovetop! 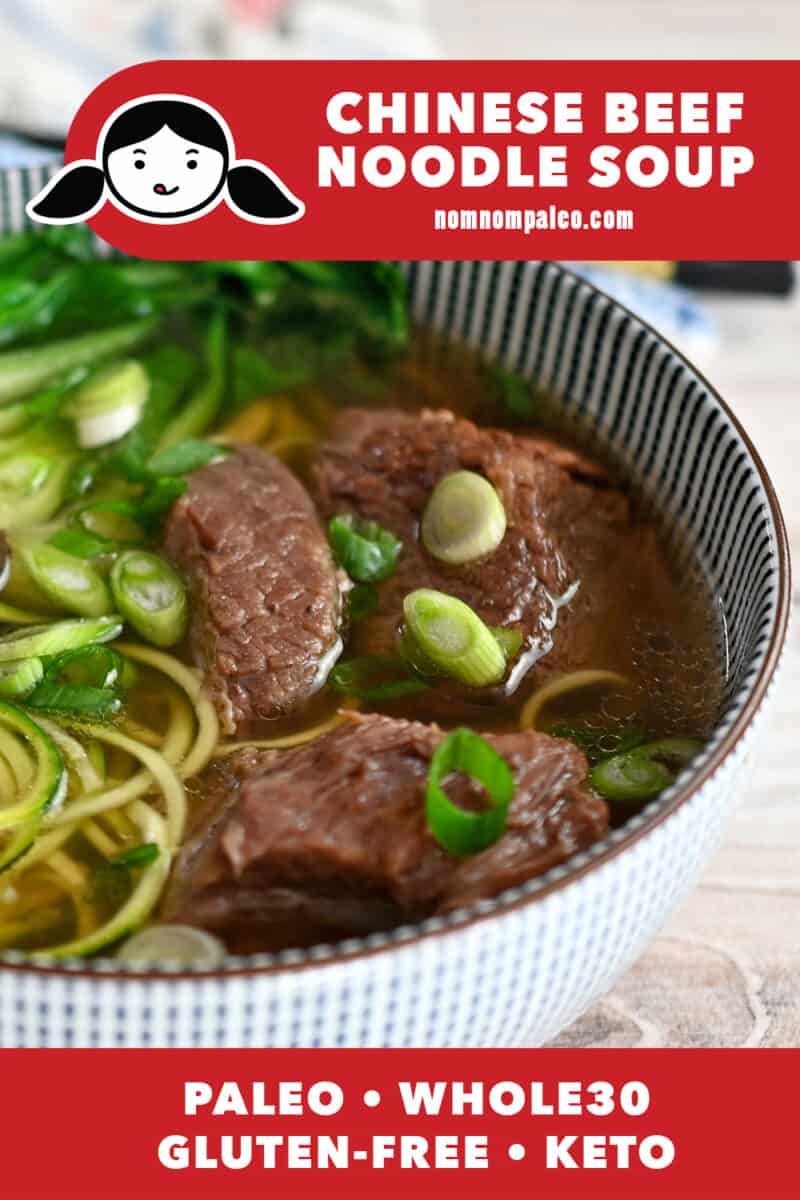 When I was a child, one of the standard weekend lunches my mom cooked for me was Chinese beef noodle soup. It was always hearty, comforting, and warmed me up from the inside out. Nostalgia for this cold-weather soup inspired me to make a simplified and paleo-friendly version, so I started tinkering with different Whole30-compatible ingredients to try to replicate the Cantonese flavors of my mom’s dish. And guess what? I did it!

This simple and healthy version of Chinese beef noodle soup uses easy to find kitchen staples AND it won’t make you feel sleepy or weighed down after you slurp it up!

Faster results in the Instant Pot!

I’m all about shortcuts to deliciousness, so if I can dump all the ingredients in an Instant Pot and walk away—that’s what I’ll do every single time. Pressure-cook some chuck roast cubes in water seasoned with garlic, ginger, scallions, shiitake mushrooms, coconut aminos, and fish sauce, and you, too, can end up with a flavorful umami-packed beef broth AND perfectly tender stewed beef. (Some folks insist on blanching the beef cubes first to remove impurities, but I don’t think it’s necessary.) 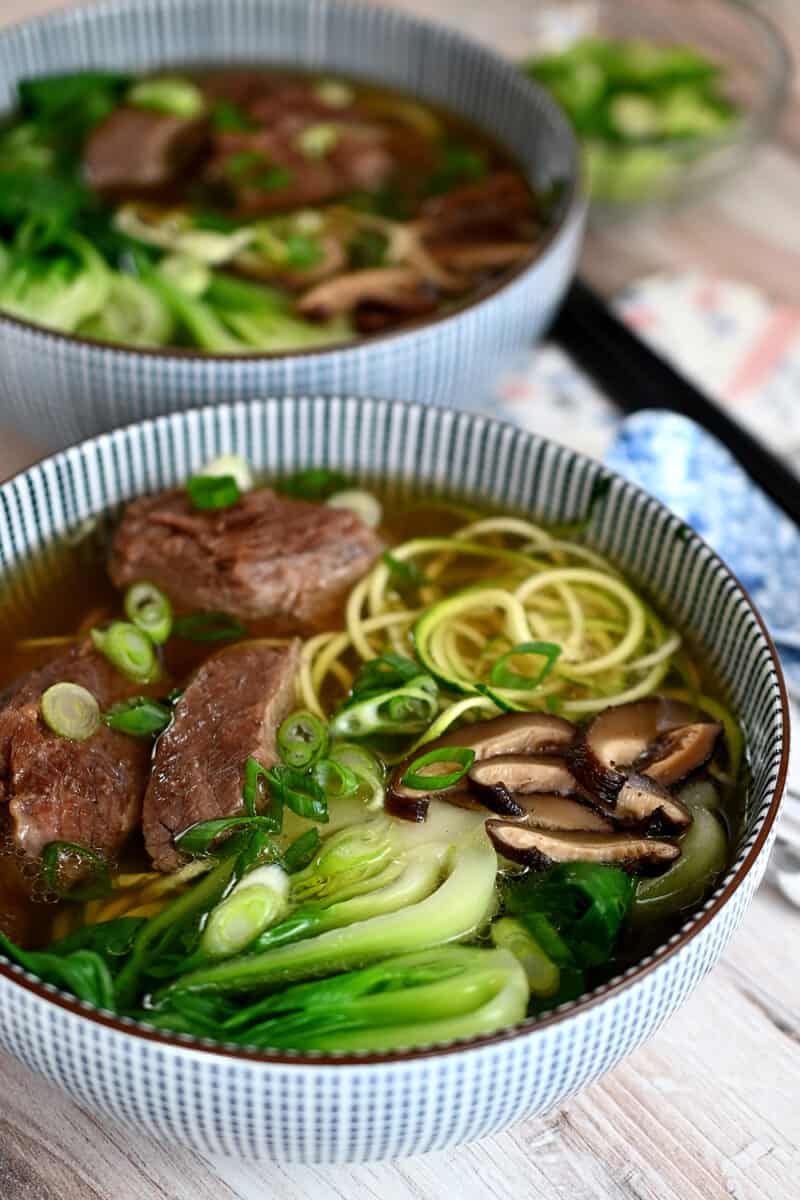 Can you make it on the stovetop?

Yes! If you don’t have an Instant Pot, you can simmer the beef and soup ingredients in a large covered pot for about 2 to 3 hours or until the beef is fork tender. Keep checking to see if too much of the liquid has evaporated and add more water as needed. Also, you can skim off any scum when you check on the amount of liquid.

You can make the beef soup part ahead of time and serve it later in the week when you need a fast noodle soup for dinner pronto! The beef soup can be stored in the fridge in a sealed container for up to four days or in the freezer for up to four months. When you’re ready to serve the beef noodle soup, reheat the soup on the stovetop or in the Instant Pot (2 minutes under high pressure) and serve with spiralized zucchini and cooked baby bok choy. 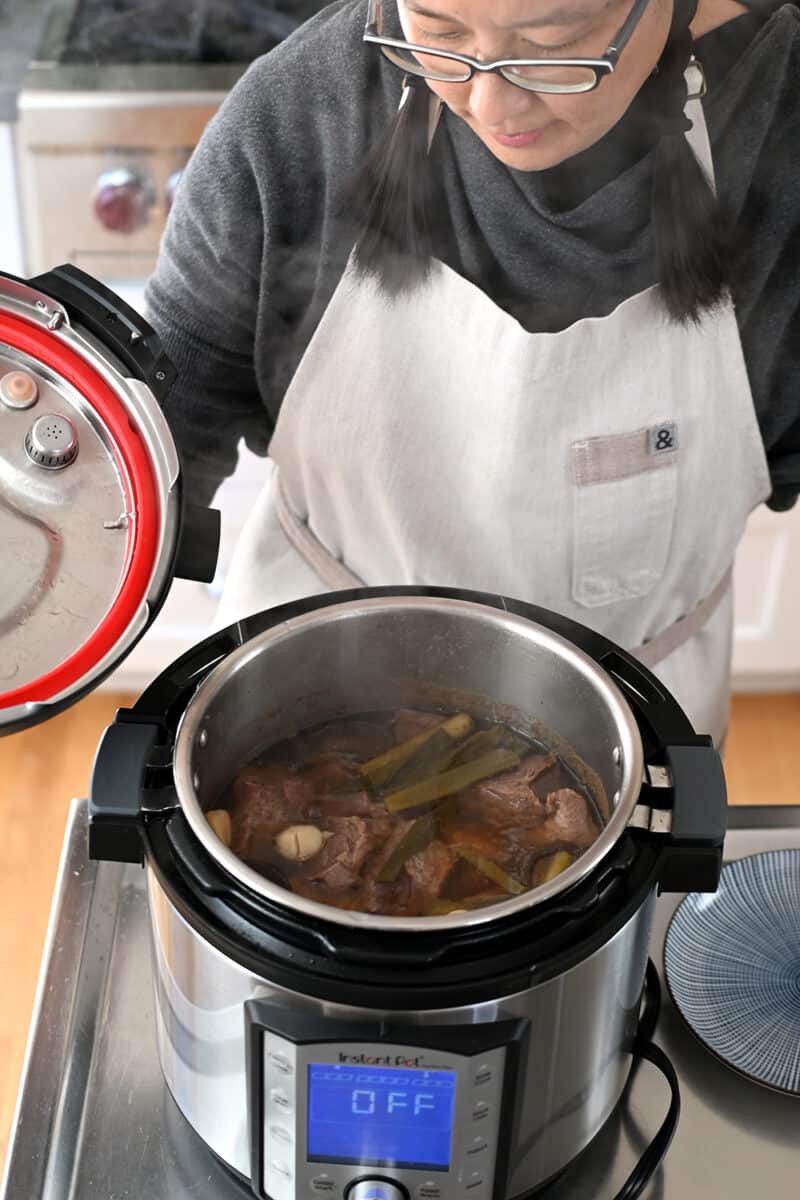 Is this the same as Taiwanese Beef Noodle Soup?

Nope. Taiwanese beef noodle soup does have braised beef and noodles, but this is a Cantonese-inspired dish. It’s not spicy, and isn’t flavored with tomatoes, chilies, star anise, or cinnamon. A tasty Instant Pot Taiwanese Beef Noodle Soup recipe can be found at The Woks of Life (but note that it’s not paleo!).

How to make Chinese Beef Noodle Soup in the Instant Pot

Place the beef chunks into the metal insert of an Instant Pot. 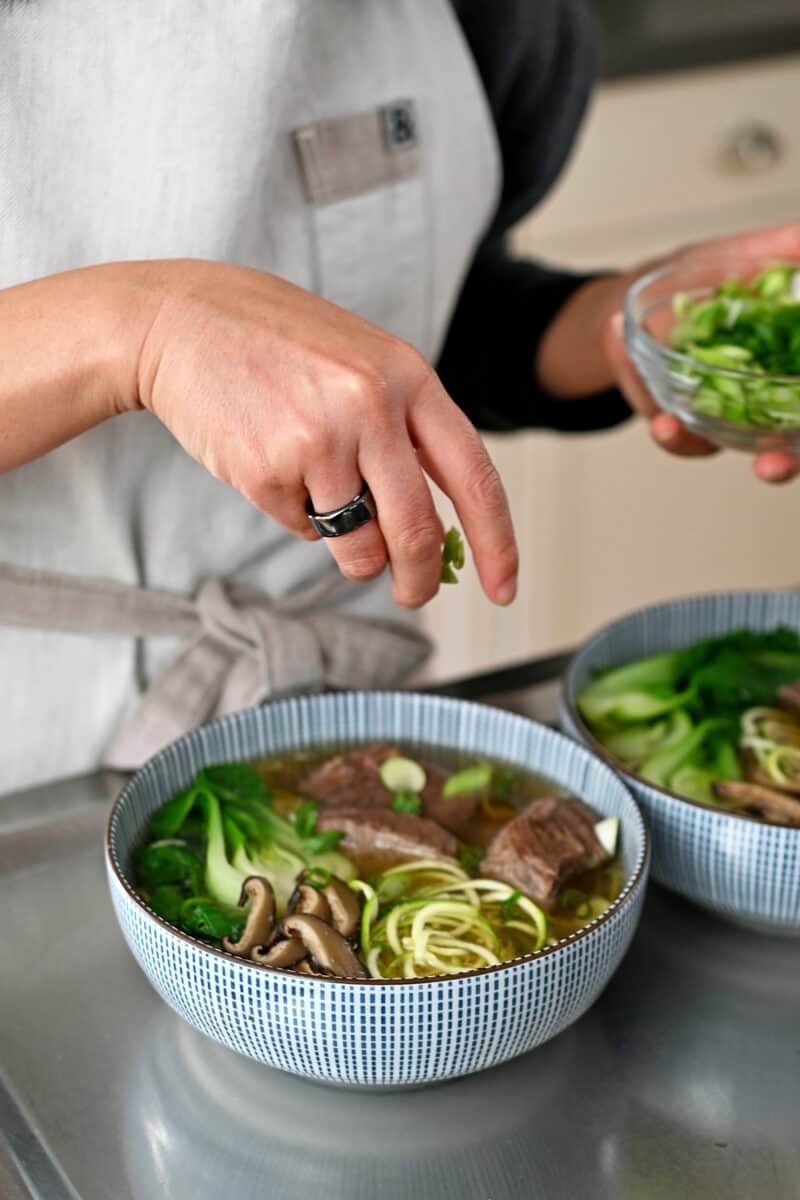 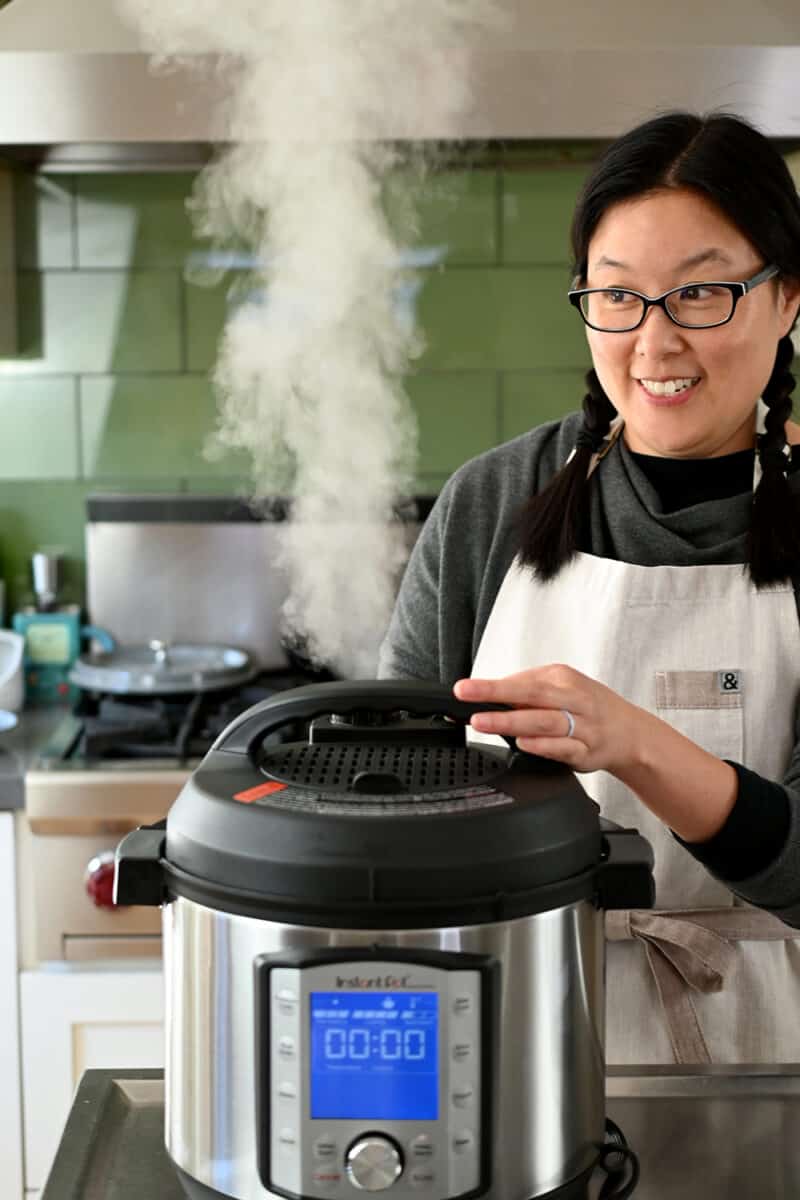 Cut two of the scallions into three pieces and plop ’em in the Instant Pot.

Thinly slice the remaining scallions and reserve for garnish. 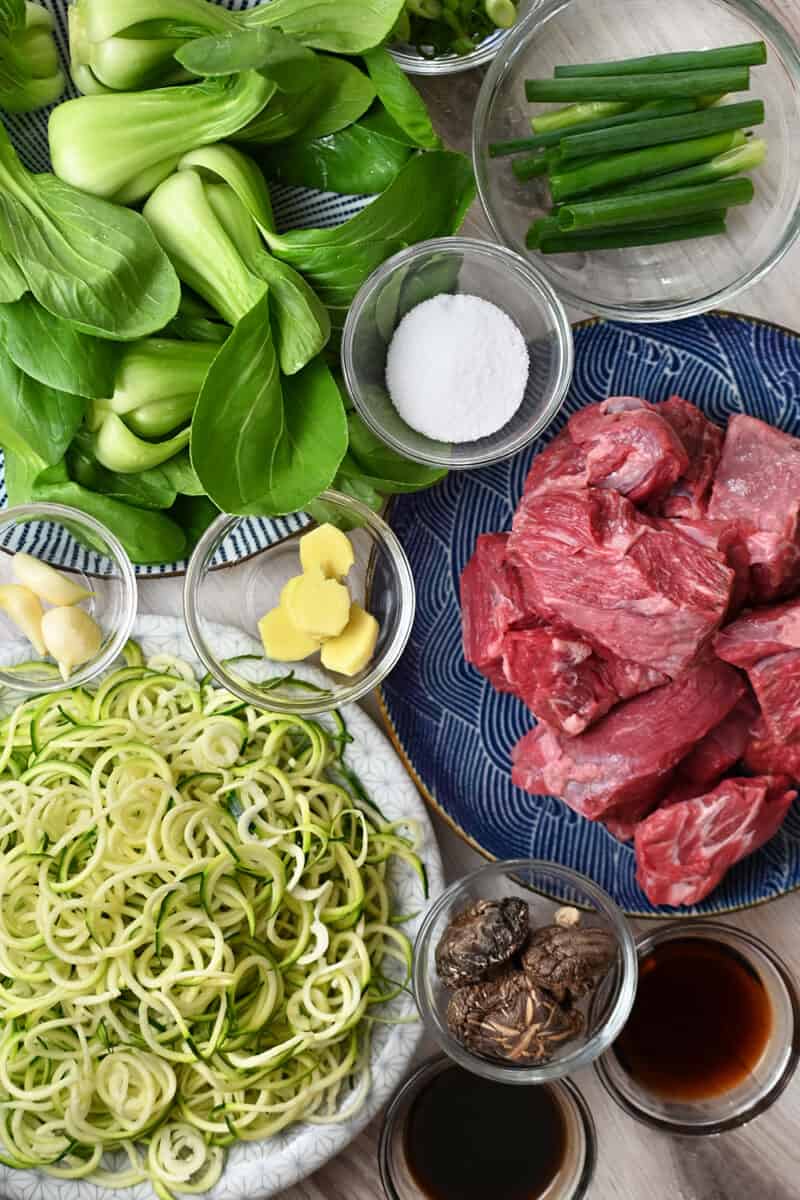 Lock the lid and program the Instant Pot to pressure-cook for 35 minutes under high pressure. When the beef soup is done cooking, let the pressure come down naturally.

While the beef soup is cooking, bring a pot of water to a boil. Add a large pinch of salt. 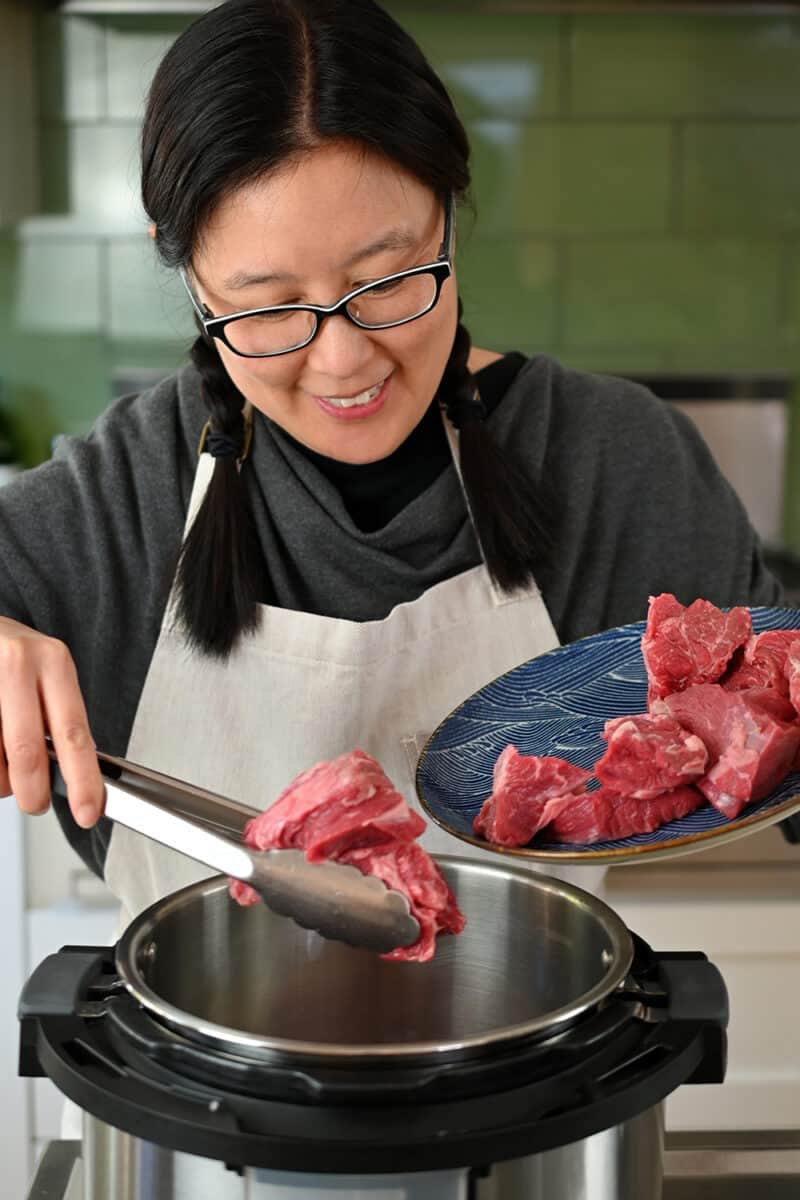 When the water is boiling, add the baby bok choy and cook for 1 to 2 minutes or until tender crisp. Remove the bok choy with a slotted spoon and set aside.

Open up the Instant Pot and discard the ginger, garlic, and scallions. 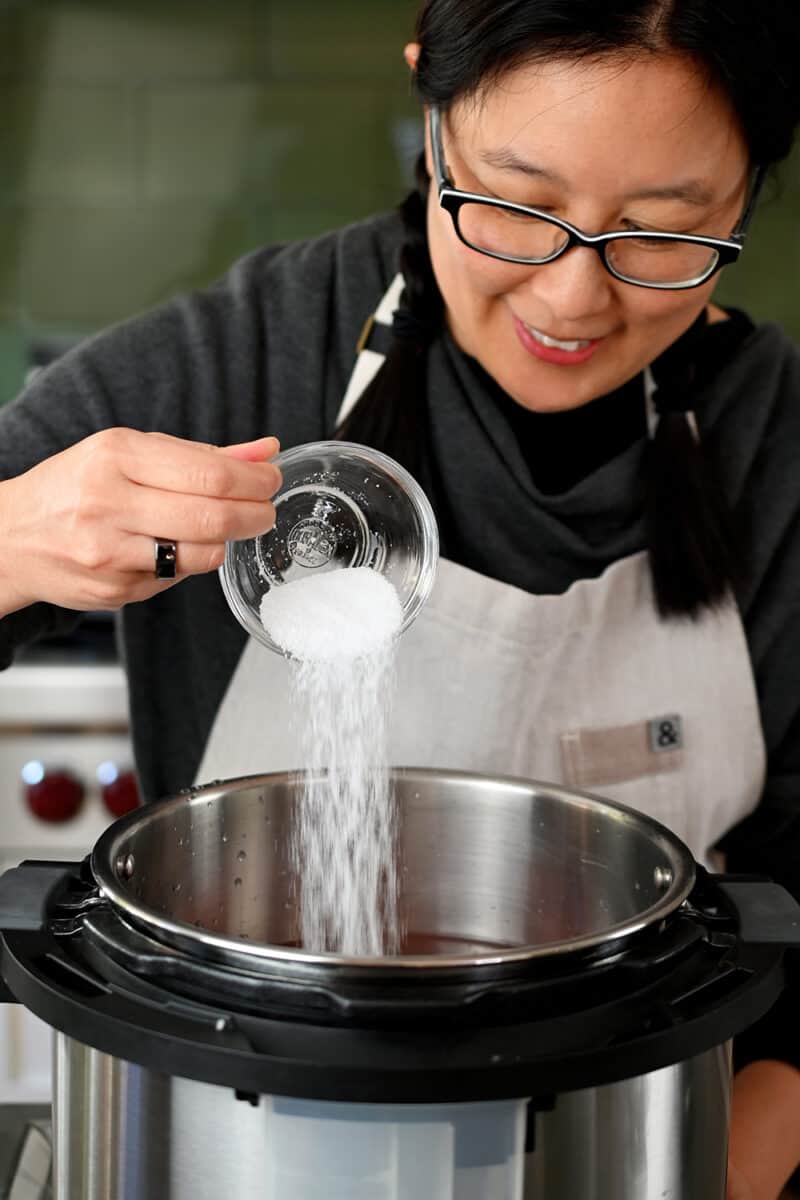 Use a slotted spoon to transfer the stewed beef to a bowl. Toss the meat with the remaining tablespoon of coconut aminos. 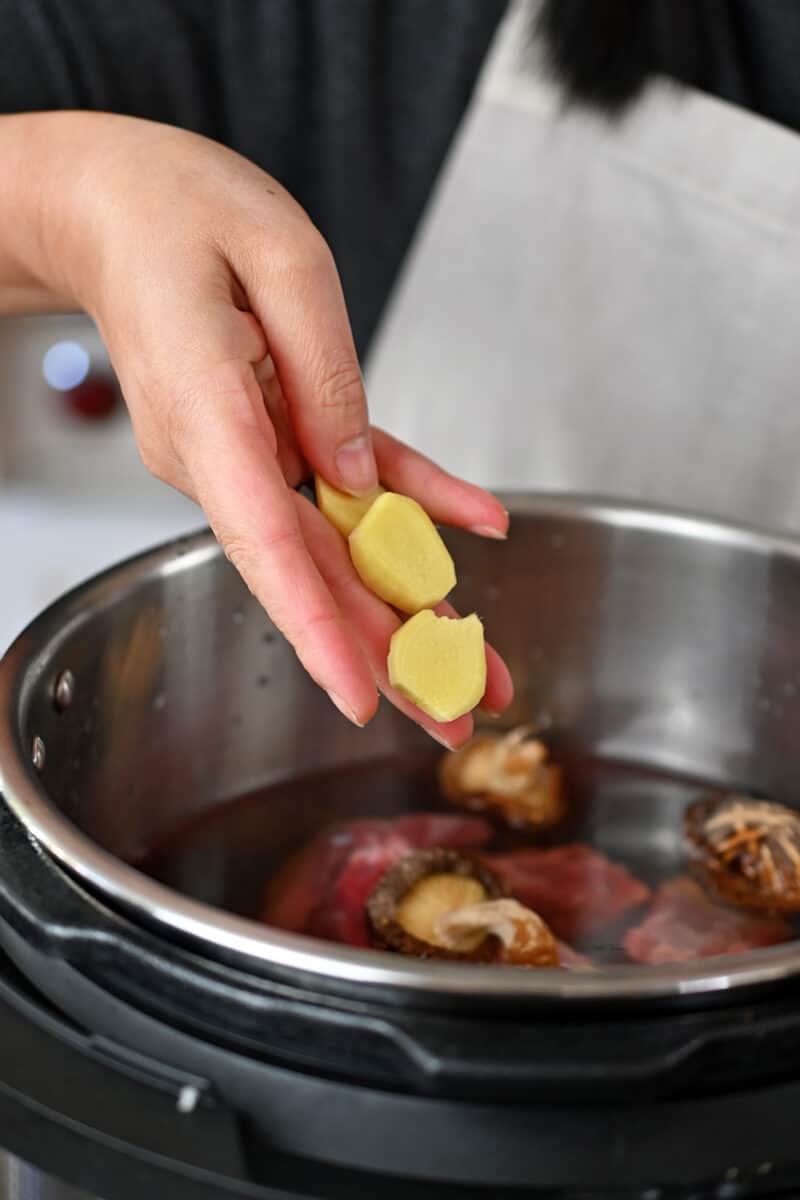 Add the toasted sesame oil to the beef soup. Taste the soup and adjust seasoning if needed.

Grab six soup bowls and divide the spiralized zucchini to each one. Ladle the broth on the zucchini noodles. 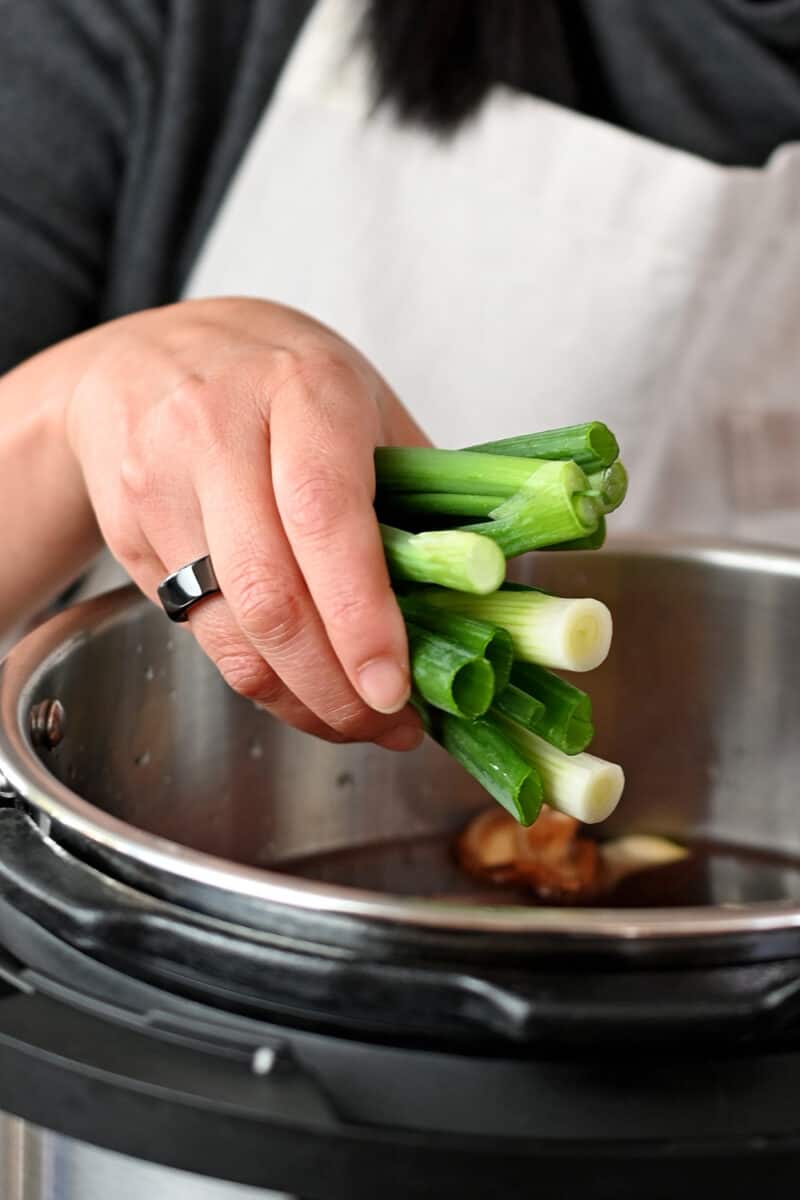 Add the seasoned meat, sliced shiitake mushrooms, and cooked bok choy on top of each bowl.

Scatter the sliced scallions on top and enjoy! 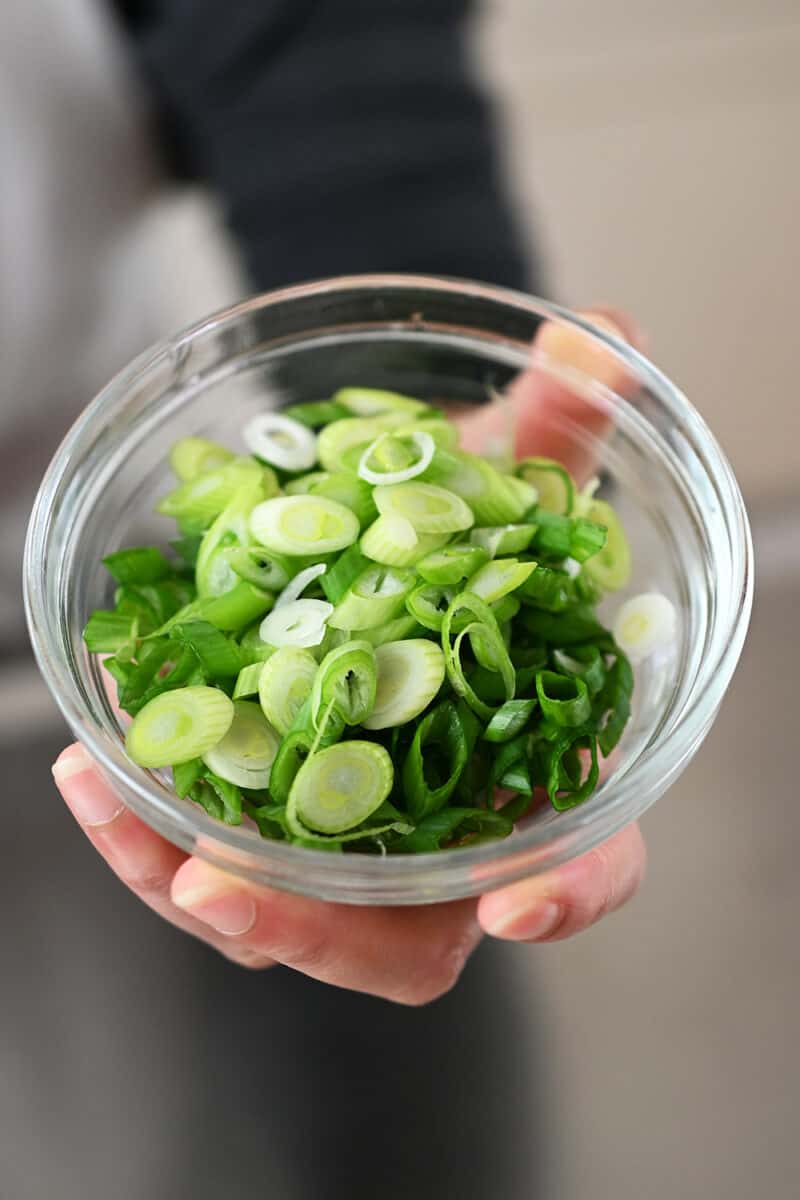