What’s a vacation without some delicious ice cream? Whether you like chocolate, vanilla, strawberry, mint chocolate chip, or anything in between, you can’t miss an ice cream shop when you go on vacation.

Hawaii is especially the best place to enjoy some refreshing ice cream right on the beach and in the sun. These are the places where you’ll find the best ice cream in Honolulu (and beyond the capital city)!

If you’re visiting Hawaii, you should especially give shave ice a try, as that’s one of Hawaii’s most well-known specialties.

In addition, there are plenty of locally-made flavors, such as macadamia nut and fruity mango, which will add a special twist to your ice cream.

Here are some of the best ice cream shops in Honolulu that you should try during a day in the sun.

Lappert’s Hawaii is located on Kauai Island. Established in 1983 by Walter Lappert, the shop offers premium ice cream made of 20 percent butterfat.

Lappert’s ice cream is made out of native resources such as papaya, coffee, passion fruit, coconut, macadamia, and lychee, which all produce rich flavors as a result.

SomiSomi opened its first location in Los Angeles, but it expanded all over the US throughout the years, such as in Las Vegas, Long Beach, San Diego, and many other cities.

In Honolulu, you can find Somisomi in the Ala Moana Center.

They are known for their Korean dessert Ah-Boong, a fish-shaped Taiyaki waffle cone cut open and used as an ice cream cone.

Somisomi’s menu serves 12 primary flavors, and they change six or so at their different locations so there would always be something new to try.

It is a small window ship, so keep your eyes peeled while searching for it. They are known to use real fruit compotes and jams to flavor their shave ice.

Some of the flavors they offer are organic coconut, mango, strawberry, pineapple, mixed berry, green tea, yuzu, and coffee syrup.

There are actual bits of fruits in all of their flavors. They proudly claim that they are organic and free of any additives, artificial colors, or flavors.

They also offer vegan ice cream, which is made with coconut milk and refreshing herbal sorbets.

Il Gelato Hawaii was founded in 2010 in Oahu. The owner studied the Italian art of making gelato in Italy, after which he trained and worked with famous experts in that field.

The flavors range from traditional Hawaiian flavors to classic ones. Some of the flavors may change depending on the season and availability. To keep things interesting, they switch it up often.

They offer different frosts, such as Hawaiian frost soft serve, which is a creamy and refreshing cross between Hawaiian shave ice and ice cream.

In addition, Samurai offers the floats in numerous flavors such as strawberry, vanilla, honeydew melon, banana, orange, coconut, lychee, yuzu, island coffee, and mango to be a nice refresher on a hot tropical day.

David Leong started his journey in 1982 by opening the first Dave’s Ice Cream location on Oahu’s west coast in Waianae.

Throughout the years while overcoming many challenges, he perfected his work and opened shops in other locations such as Aiea, Pearl City, Waimanalo, Waipio, and Kaunakakai.

Dave’s Ice Cream specializes in making fresh ice cream on the island of Oahu. They have a factory that produces 50,000 gallons of ice cream each month.

Quality is the most important for them, hence when available, fresh fruit is used instead of canned or frozen fruit. Now Dave’s Ice Cream has 50 flavors, 40 of which are available in all locations.

Did we miss any of your favorite places for ice cream in Honolulu in this guide? Let us know your top Honolulu ice cream shops below! Thanks! 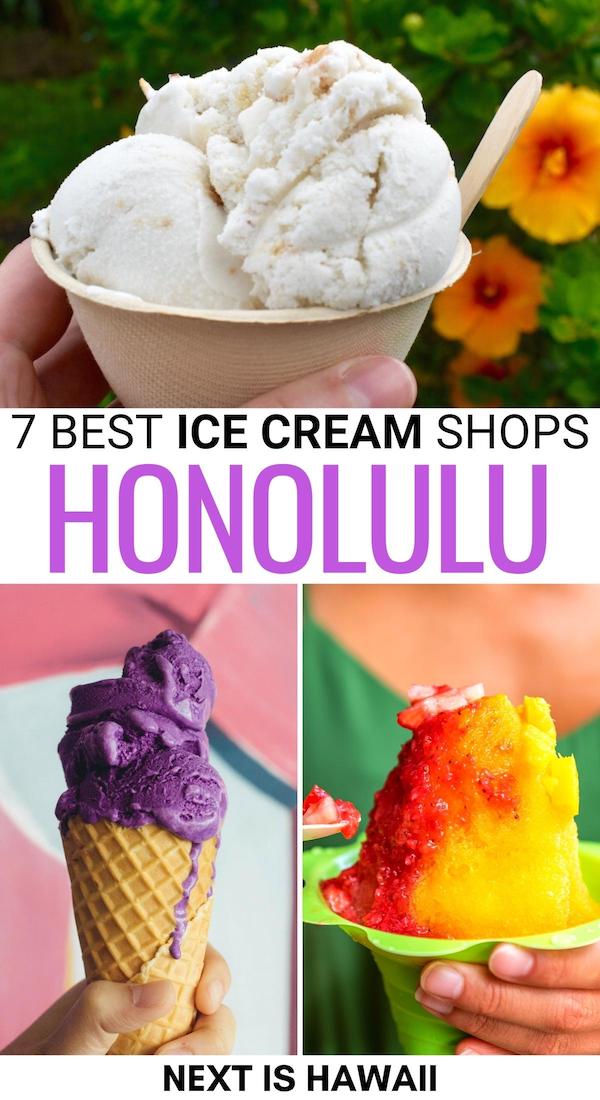 Through this article, we hope to help you understand Best ice cream honolulu