Why do you need a special generator for a food truck?

A food truck poses a lot of unique challenges when it comes to choosing a generator. Space is often cramped, both inside the truck and in the outside area around the truck. You need to be able to talk to your customers and for them to be able to enjoy their food in peace, so the generator can’t be too loud or else it will drive customers away.

Food trucks also tend to have a lot of motor-driven and power-hungry appliances like refrigerators, air conditioners, microwaves, and electric stovetops that require a generator that can handle power surges and consistently high power outputs. Another important consideration is that your generator needs to run for as long as your truck is open for business, which means you may be running the generator without pause for hours at a time.

All of these challenges combine to require a generator that is powerful, yet quiet, and compact but boasts a large fuel reservoir. Not every generator is built to suit the demands of powering a food, which is why it is so important to look specifically for generators that can handle the requirements of this environment. 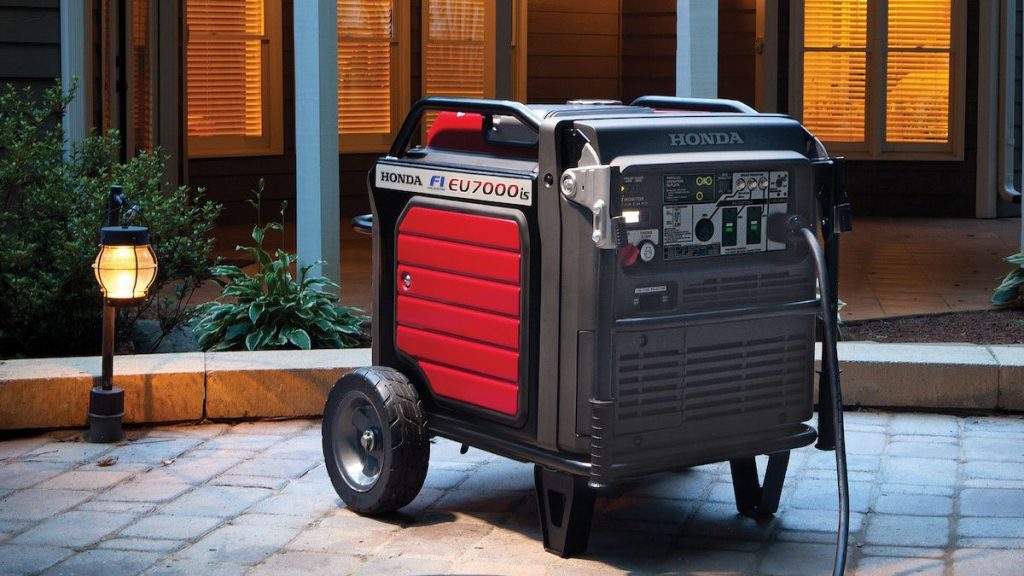 Generators can differ a lot in terms of the power they put out, the fuel they run on, and their general usability and reliability. Here, we’ll explain the most important features of generators and how they relate to running your food truck.

How much power do you need?

The number one thing you need to consider when choosing a generator for your food truck is how much power, measured in wattage, that you’ll need. The way to figure this out is to add up the wattage of all the electrical appliances you plan to run on the generator – this sum is the number of continuous watts that you will draw.

The generators we reviewed range from 3,500 watts of running power on the Pulsar model to 9,500 watts on the DuroMax model.

Fuel: gasoline, propane, or both?

Modern generators are designed to run on either gasoline or propane – while most generators only accept one fuel or the other, dual-fuel generators, like the model from DuroMax, can accept either.

On the other hand, gasoline is more expensive than propane and can be more difficult to store inside your food truck, since it almost always produces some fumes. Another reason that propane is advantageous is that the runtime of gasoline-fueled generators is limited by the size of their reservoir – the generator must be turned off and cooled down before adding more gas.

The engine is the heart of any generator and it directly affects the amount of power that a generator will be able to output. For example, the 457cc engine on the DuroMax generator is the largest engine volume of any generator we reviewed, and that model correspondingly has the highest rated power output.

Another thing to think about when looking at generator engines is whether they are two-stroke or four-stroke. Four-stroke engines, like those found on the Pulsar and Westinghouse generators, will typically be slightly quieter and more fuel efficient than their two-stroke cousins.

Runtime is an extremely important consideration when choosing a generator for a food truck because you don’t want to lose power or have generator downtime while you are dealing with customers. Gasoline-powered generators are limited by the size of their fuel reservoir, which ranges from less than four gallons for the Pulsar model to more than seven gallons for the Generac generator.

Note that runtime is determined not only by reservoir size, but also by fuel efficiency and power draw. More fuel-efficient engines will boast longer runtimes for the same amount of fuel, which is why the Honda and Pulsar generators have impressively long runtimes with relatively modest fuel tanks.

Making sure that you have all of the outlets you may need for your appliances is also an important component of choosing a generator for your food truck. Some heavy-duty appliances require 240V locking outlets or 30A outlets rather than the standard 120V-20A household outlets that are found on nearly every generator. In addition, consider whether you need USB charging ports built into your generator or whether you need a 12V DC outlet for charging batteries.

Noise is another important consideration when choosing a food truck because it can dramatically affect whether your food truck is a pleasant environment for customers. You need to be able to communicate with your customers to take orders and, if you offer seating, your customers will want to be able to talk with their friends over food. Noise levels on generators can range widely, from just 52 dB on the Westinghouse generator to more than 70 dB on the DuroMax generator.

It’s important to keep in mind that you’ll need to move your generator between the inside of your food truck for storage and the outside to run it every day. Thus, you need a generator that is small enough to fit inside your food truck and lightweight and portable enough to move around easily. In general, generators with larger rated power outputs and larger fuel tanks will be larger in size and heavier. If portability is a serious concern, look for generators that feature heavy-duty carry frames, like the Honda, DuroMax, and Generac models, rather than just built-in wheels.

A generator is a major investment in your business, so you want to be sure it will last. Generators typically come with manufacturers’ warranties, although these are often just one year for commercial use. The rare exception on our list is the Honda generator with its three-year commercial warranty.

The most important tips we can give for using your generator are about maintaining it and using it safely.

If you want to keep your generator running for years to come, it is extremely important to maintain it. This means keeping your oil fresh and full and not leaving gas inside the fuel reservoir for extended periods.

Another important tip is to let the generator cool down fully before adding more gasoline to the reservoir. Adding gas when the generator is still hot can cause sparks, which is extremely unsafe.

Unfortunately, you should expect to invest a fair amount of money for a quality generator for your food truck. More powerful generators are typically more expensive and can easily run over $1,000, while generators from vaunted engine companies like Honda can cost several thousands of dollars. The least expensive generator we reviewed, from Pulsar, costs $850.