As Memorial Day approaches, so does ice cream season. And while chances are you have a wonderful independent ice cream shop near you, there’s just something about Cold Stone Creamery that can’t be beat. Founded in Arizona by Susan and Donald Sutherland in 1988, the husband and wife team sought to bring super-premium ice cream with a unique concept to Arizona. Needless to say, the idea caught on and the chain now boasts over 1,000 locations in the U.S.

But though the ice cream shops churn out creamy confections, there are some secrets that Cold Stone would rather you not pay attention to when enjoying their frozen, made-to-order treats.

RELATED: 8 Worst Fast-Food Burgers to Stay Away From Right Now

While Cold Stone is proud of the fact that they serve “super-premium” ice cream, the secret is that this literally means it’s very high in fat. For ice cream to be considered super-premium by law it needs to have 12-14% butterfat and a low overrun, or the amount of air that is mixed in when the ice cream is churned. As mentioned in a Mashed article, the premium ingredients which include real cream, nonfat milk, sugar, corn syrup, and whey result in a 5-ounce serving, the small “Like It” size, serving up 21 grams of fat.

While it’s true that every batch of ice cream is churned in-house, it’s all made from premade bases and mixes that are made in a large factory and delivered to the locations. The employees then pour the mixtures into the ice cream machines.

Another employee mentioned that while the ice cream is high-quality, some of the ice creams have more “real” ingredients than others. The employee recommended anything with “banana, coffee, sweet cream” as those are made with the more ‘real’ ingredients.” In fact, every ice cream starts with one of four company bases: sweet cream ice cream, chocolate ice cream, sorbet, and yogurt.

Plus, some flavors contain natural and artificial flavorings instead of the real deal, like the cheesecake flavors which contain cheesecake flavoring, not any real cream cheese, or the pistachio which doesn’t have any actual pistachios in it. Many contain artificial colors as well. If you are sensitive to any ingredients, it’s best to check the ingredient list. ​​

But, you’re going to pay. A brave writer for Serious Eats once ordered every mix-in at Cold Stone and it came out to a whopping $28.90. Granted, the mixture of candy, fruit, marshmallows, and gummy bears bordered on inedible, so you’d probably have a bit more self-restraint. The point is, those toppings can really add up. But here’s a tip: You can ask your server for an estimate before it’s made because no one likes a $15 surprise. 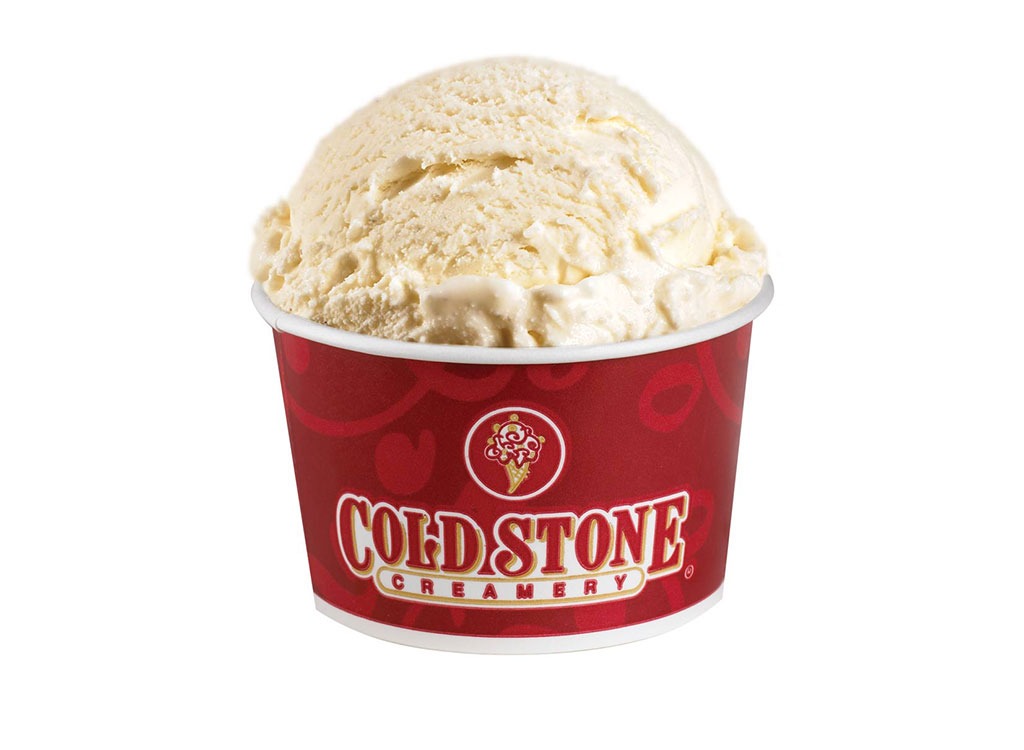 Cold Stone ice cream isn’t cheap. The Like It size starts at $4 with one mix-in and it’s $.75 for each additional. That’s one scoop of ice cream for about as much as a pint of premium ice cream in the supermarket.

But Cold Stone is going to taste way better than what you can make at home, says an employee, “Unless you can afford a $30,000 ice cream machine like ours, you will not be able to make it at home. Our machine is specifically designed to make the ice cream creamy and smooth.” Plus, he reasons, “Grocery store ice cream is packaged weeks/months before you actually consume it. With Cold Stone it’s made fresh and made to order, so you can get EXACTLY what you want. It may cost a little more but as our motto says ‘friends don’t let friends eat grocery store ice cream.'”

Another employee offers this tip for getting more flavor for free: “Little-known fact: at Cold Stone, you have to pay extra for each mix-in, but as long as your server can fit them into the right 5-, 8-, or 12-oz cup, you can mix as many flavors of ice cream as you want.”

According to another employee, you might want to skip the cherry pie filling because it’s the least popular. “Being its the least popular,” she warns, “it will sit out the longest and sometimes pie crust or almonds will wander into it…” Also, if your child insists on gummy bears, get them on the side. They tend to become hard and impossible to eat in the actual ice cream.

This probably doesn’t come as a shock, but all of the Gotta Have It Signature Creations are in the 1,000 to 1,200 calories range. Get the Like It for about half the calories. 600-plus calories is still a lot for a treat, but it’s not half your calories for the day. Also, skip the shakes. These range from 530 calories for the 12-ounce Chocolate Silk Shake to an astounding 1,610 calories for the 20-ounce Reese’s Chocolate Peanut Butter Dream. If you have to have a treat, eat it instead of drinking it.

RELATED: We Tasted 10 Vanilla Ice Creams & This Is the Best One!

According to a Reddit user that is a manager, the menu boards might be, “DANGEROUSLY outdated.” “We still list the old stuff they discontinued,” he says, “No one except veterans know wtf those are anymore.” Check out the website to see what’s new before you go.

Be careful when you shovel in your frozen treat. The employees have seen crazy things. “One guy had to lay down on the floor while we got him some warm water. We also have a lot of kids lose it and start screaming.” The best way to counteract a viscous brian freeze? “Hold your tongue against the roof of your mouth,” one suggests.

While some locations still faithfully sing, many don’t on slower days and it’s okay to say you don’t want them to. “Sometimes people will say “you don’t have to sing” which we obviously appreciate. To be honest, it’s so busy at our store at times, that we rarely sing unless requested, because singing just slows down the line, and then people get angry that we are holding things up,” the manager confessed.

Did your gummy bear, marshmallow, and pineapple creation not work out as planned? The manager says you can always ask for a do-over. “Cold Stone will ALWAYS give you another free ice cream if you don’t like what you ordered,” he says.

RELATED: This Is the Most Popular Ice Cream Flavor in America, New Data Shows